I always knew that Ronald Reagan had been “married” before Nancy to the actress Jane Wyman. And as I learned about and converted to Catholicism, I assumed that sadly, President Reagan and Nancy were probably not really married, which seemed especially sad given the strength of their bond and devotion to one another. But, objective reality and truth trumps mere sentiment.

But I was wrong about the validity of Ronald and Nancy Reagan’s marriage.

It turns out that Reagan’s “marriage” to Jane Wyman was, in fact, null.  Our Lord never joined them together because Jane Wyman had been validly married and then civilly “divorced” (remember, civil divorce is a fiction) before Reagan in the 1930s.  Jane Wyman converted to Catholicism in ARSH 1954, and thus had her marriage to Reagan formally declared null by The Church, as it should have been.  Jane Wyman was great friends with the devout Catholic Hollywood actress Loretta Young, who was almost certainly instrumental in Wyman’s conversion to The One True Faith.  Jane Wyman eventually became a Third Order Dominican, and was, in fact, buried in the habit of a Dominican nun. She attended President Reagan’s funeral, and of him said this:

So, President Reagan and Nancy Davis were, in fact, validly married. This makes me especially happy.

Now, to President Reagan himself.  I came across a letter that Reagan wrote to his son, Michael (whom he had adopted with Jane Wyman) in ARSH 1971 on the occasion of Michael’s marriage, over at Ace of Spades last week.

Reading this letter, it becomes clear that President Reagan was not only capable of love, but loved deeply, and thus, we can know, was NOT a Diabolical Narcissist.  He was probably the last decent, good man to hold that level of power. He wasn’t perfect. Neither was Nancy. No one is.  But, President Reagan was NOT a monster. In short, he was a normal, decent man.

(Source: Reagan: A Life In Letters)

Enclosed is the item I mentioned (with which goes a torn up IOU). I could stop here but I won’t.

You’ve heard all the jokes that have been rousted around by all the “unhappy marrieds” and cynics. Now, in case no one has suggested it, there is another viewpoint. You have entered into the most meaningful relationship there is in all human life. It can be whatever you decide to make it.

Some men feel their masculinity can only be proven if they play out in their own life all the locker-room stories, smugly confident that what a wife doesn’t know won’t hurt her. The truth is, somehow, way down inside, without her ever finding lipstick on the collar or catching a man in the flimsy excuse of where he was till three A.M., a wife does know, and with that knowing, some of the magic of this relationship disappears. There are more men griping about marriage who kicked the whole thing away themselves than there can ever be wives deserving of blame. There is an old law of physics that you can only get out of a thing as much as you put in it. The man who puts into the marriage only half of what he owns will get that out. Sure, there will be moments when you will see someone or think back to an earlier time and you will be challenged to see if you can still make the grade, but let me tell you how really great is the challenge of proving your masculinity and charm with one woman for the rest of your life. Any man can find a twerp here and there who will go along with cheating, and it doesn’t take all that much manhood. It does take quite a man to remain attractive and to be loved by a woman who has heard him snore, seen him unshaven, tended him while he was sick and washed his dirty underwear. Do that and keep her still feeling a warm glow and you will know some very beautiful music. If you truly love a girl, you shouldn’t ever want her to feel, when she sees you greet a secretary or a girl you both know, that humiliation of wondering if she was someone who caused you to be late coming home, nor should you want any other woman to be able to meet your wife and know she was smiling behind her eyes as she looked at her, the woman you love, remembering this was the woman you rejected even momentarily for her favors.

Mike, you know better than many what an unhappy home is and what it can do to others. Now you have a chance to make it come out the way it should. There is no greater happiness for a man than approaching a door at the end of a day knowing someone on the other side of that door is waiting for the sound of his footsteps.

P.S. You’ll never get in trouble if you say “I love you” at least once a day.

And here is the gift President Reagan gave Nancy for Christmas of ARSH 1981. What more could any morally sane woman want? Read it and weep, ladies.  Literally.

I still don’t feel right about you opening an envelope instead of a gift package.

There are several much beloved women in my life and on Christmas, I should be giving them gold, precious stones, perfume, furs and lace. I know that even the best of these would still fall far short of expressing how much these several women mean to me and how empty my life would be without them.

There is of course my “First Lady.” She brings so much grace and charm to whatever she does that even stuffy, formal functions sparkle and turn into fun times. Everything is done with class. All I have to do is wash up and show up.

There is another woman in my life who does things I don’t always get to see but I do hear about them and sometimes see photos of her doing them. She takes an abandoned child in her arms on a hospital visit. The look on her face only the Madonna could match. The look on the child’s face is one of adoration. I know because I adore her too.
She bends over a wheelchair or bed to touch an elderly invalid with tenderness and compassion just as she fills my life with warmth and love.

There is another gal I love who is a nest builder. If she were stuck three days in a hotel room she’d manage to make it home sweet home. She moves things around — looks at it — straightens this and that and you wonder why it wasn’t that way in the first place.

I’m also crazy about the girl who goes to the ranch with me. If we’re tidying up the woods, she’s a peewee power house at pushing over dead trees. She’s a wonderful person to sit by the fire with, or to ride with or first to be with when the sun goes down or the stars come out. If she ever stopped going to the ranch I’d stop too because I’d see her in every beauty spot there is and I couldn’t stand that.

Then there is a sentimental lady I love whose eyes fill up so easily. On the other hand she loves to laugh and her laugh is like tinkling bells. I hear those bells and feel good all over even if I tell a joke she’s heard before.

Fortunately, all these women in my life are you — fortunately for me that is, for there could be no life for me without you. Browning asked; “How do I love thee — let me count the ways?” For me there is no way to count. I love the whole gang of you — Mommie, first lady, the sentimental you, the fun you, and the peewee power house you.

And oh yes, one other very special you — the little girl who takes a “nana” to bed in case she gets hungry in the night. I couldn’t and don’t sleep well if she isn’t there — so please always be there.

Merry Christmas you all — with all my love. 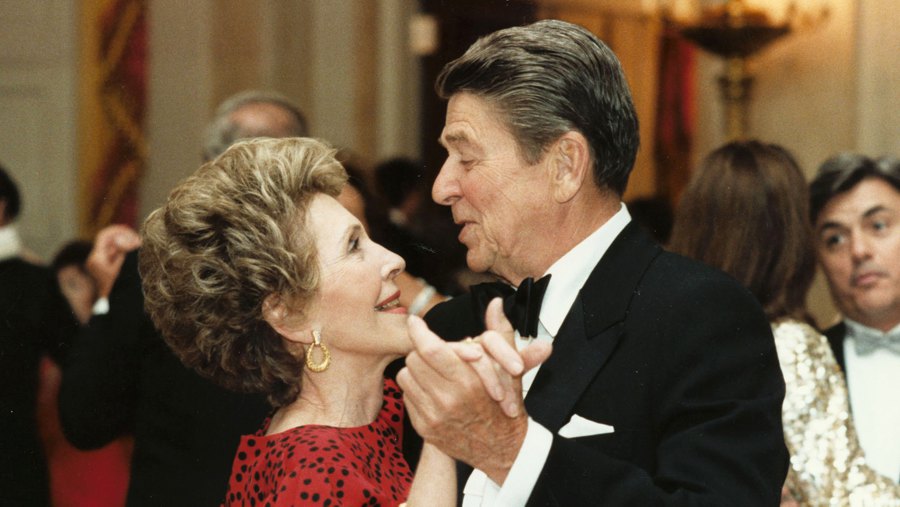