Ann,
I have been simply amazed at the amount of whining my fellow cowboys are doing now. I am constantly reminding them how wonderful they thought it was three years ago when prices reached the level that they currently are today. You had fat cattle trade for under a buck per pound last week and it is “the end of the world”.  Also had a guy last week bragging about his last pen of steers gaining 4.7 pounds per day with the cost of the gain being under $0.60 cents per pound. I asked him how much money he made and he said they lost $50 bucks a head. I replied, “Then what difference did it make that they gained so much if you lost money?” He looked at me like I was an idiot because I wasn’t impressed with his performance facts.

I cannot express how much getting rid of the banker and trading cattle as you and Bud taught has done for my life. I go to bed and sleep all night and worry not! I have so much fun doing what markets tell me to do. Five years ago I was doing all stocker trades, but by paying attention, I switched to cows and sold three calf crops in excess of $1500 per head out of cows that were purchased when they should have been. Now the market is signaling a return to the stocker cattle paradigm, and I made a lot of money getting rid of my young bred heifers and cows while they were overvalued. You may need to come out again because a lot of these guys are in a hell of a mess one short year after the biggest run-up in prices in my lifetime! It is so simple: performance , price sold for, etc. has not one thing to do with how much money you make! Thank you so much for the knowledge you have given me. My wife and I talk of you often.

R is absolutely correct. Right now, the margin possibilities coupled with the unimaginably low gain costs present a better situation than I have ever seen in the Stocker segment. It’s a jolt on the cow-calf side, but incredibly good elsewhere.

We watched the sale at (Smallville, USA) on Tuesday online via DV Auction for a little while during lunch. Nothing that we saw sell that was under 400 pounds brought over $1.25 per pound. This includes the 250 pound cattle. Later in the sale, they sold a load of 800 pounders for $1.25. If you can’t figure that out with cost of gain at $0.60 per pound, then you better find some other way to kill time between meals. 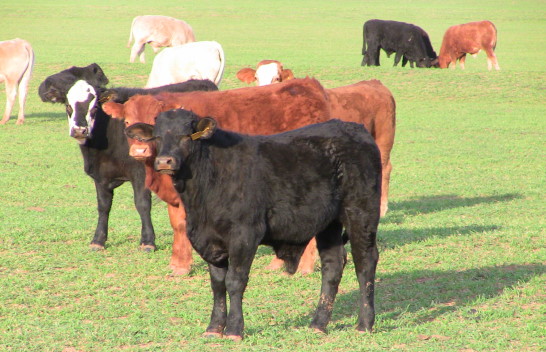