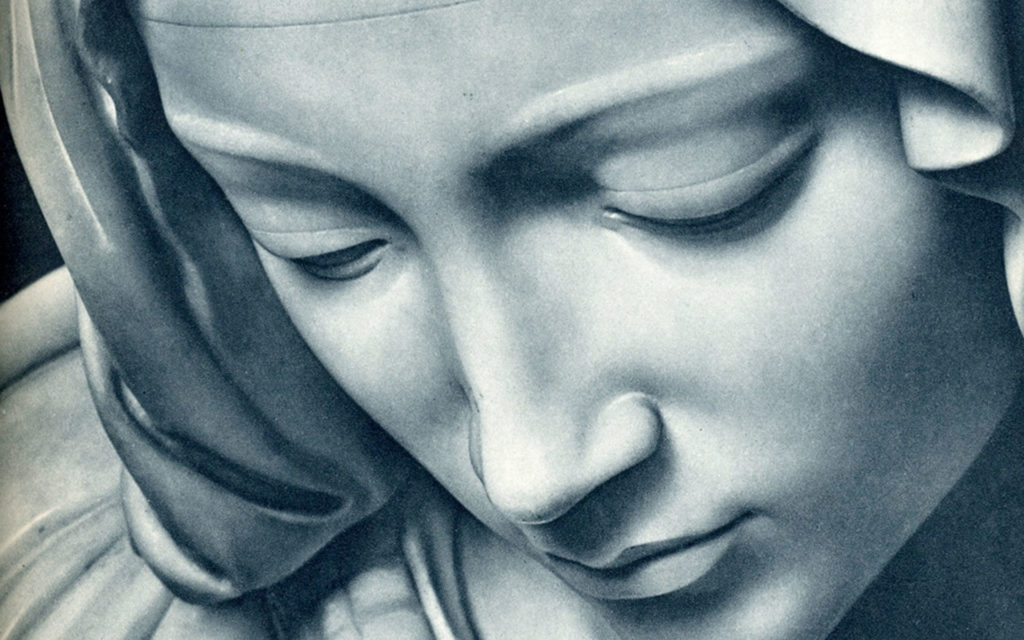 Yesterday was the highest Marian feast of the year- the Feast of the Assumption.  In the former U.S., it wasn’t even a Holy Day of Obligation – the bishops decided that it is JUST. TOO. MUCH. to ask people to go to Mass on Sunday, and then again the very next day!

Meanwhile, satanists held a black mass in Oklahoma City, with the specific intention of desecrating the Blessed Virgin. Reportage here.

But this excerpt struck me especially:

According to the ritual, the corrupted Mary statue is placed into the center of a Solomonic triangle, which “entraps” her. Celebrants dance counter-clockwise around the statue before a spirit severs the statue’s head, unleashing a hellmouth, or opening to hell.

Inside the statue is an actual pig’s heart, Daniels said. After the statue has been smashed, a  priestess pulls the heart out of the rubble and eats it, thus “consuming” Mary and ending the ritual.

“You’re basically going to have three rituals going on at the same time,” Daniels said. “We’re trying to show people how chaotic we are in nature and how chaotic our religion is. It’s all based on chaos.”

Please cross-reference this to Antipope Bergoglio, possible and ever-more-probable False Prophet Forerunner of the Antichrist, and his continual calls for chaos, most recently in Poland at the horrific “World Youth Day”.  Headline here: “In first balcony talk, Pope tells youth to ‘make chaos'”

And, what faithful Catholic will ever forget Bergoglio’s sickening contempt for The Rosary as he visited with a group of South American nuns back in the summer of ARSH 2013.

As I prepare my open letter to the SSPX, I would remind those SSPX’ers reading that when Bergoglio referred to these “restorationist groups” that “it fell on him to receive”, he is talking, in part, about the SSPX.

I share with you two concerns. One is the Pelagian current that there is in the Church at this moment. There are some restorationist groups. I know some, it fell upon me to receive them in Buenos Aires. And one feels as if one goes back 60 years! Before the Council… One feels in 1940… An anecdote, just to illustrate this, it is not to laugh at it, I took it with respect, but it concerns me; when I was elected, I received a letter from one of these groups, and they said: “Your Holiness, we offer you this spiritual treasure: 3,525 rosaries.” Why don’t they say, ‘we pray for you, we ask…’, but this thing of counting… And these groups return to practices and to disciplines that I lived through – not you, because you are not old – to disciplines, to things that in that moment took place, but not now, they do not exist today…

If your blood does not run cold at this, stop and think about what the denial of a thing’s existence permits a diabolical narcissist sociopath, like Bergoglio, to justify doing.

And so, here is the Lesson from the Mass of the Assumption, from the book of Judith. When I read this at Mass yesterday, I knew who this “enemy” was that we must enjoin the Blessed Virgin to save us from, this enemy who is seeking our ruin. And she will.

The Lord hath blessed thee by His power, because through thee He hath brought our enemies to nought. O daughter, blessed art thou of the most high God, above all the women upon the earth. And blessed be the Lord, who hath created the heavens and the earth, who directed thee to the wounding of the head of the prince of our enemies; because He hath so magnified thy name this day, that thy praise shall not depart from the mouth of men which remember the power of the Lord for ever, for whom thou hast not spared thy life, by reason of the distress and tribulation of thy people, but hast averted our ruin, in the presence of our God. Thou art the glory of Jerusalem, thou art the joy of Israel, thou art the honor of our people.