{I dunno.  I dunno if my tactics are right or wrong. I dunno up from down some days. But I do know that emails like this land in my email box with some regularity.  This one is especially edifying, though.  I’m posting this because as I have said before, even when The Catholic Church is being systematically destroyed from the inside by THE POPE HIMSELF – and remember that the papacy is the NUMBER ONE HURDLE for most protestant converts; even when it would seem that every protestant objection to the papacy is incarnate and manifesting before our very eyes in Pope Francis Bergoglio – the radiant, shimmering beauty of The Bride of Christ, scourged and nailed to the Cross beside Her Spouse cannot, CAN NOT be obscured.  He truly does draw all things to Himself.  Read on, with my response below.}

I am writing to ask for guidance. It is partly your fault that I need guidance! When I first began reading your blog last year, I loved your candor, but hated your idolatrous Catholicism.

You see… I am not your average lay person. I have a BS (no pun intended!) in Biblical Education and an MDiv degree from a respectable Baptist seminary. My father was a Baptist pastor and my grandfather also. I am a direct descendant of that great Pilgrim and runaway protester, William Bradford of the Mayflower. I have been a protestant pastor for more than 20 years and more than half of that time as a REFORMED Baptist pastor, the worst of the Rome haters! Our confession says that the Pope is the Antichrist. I know you actually agree with that regarding the current anti-pope, but of course that confession was written in 1689. [I do not believe he is THE Antichrist.  I believe Bergoglio is of the spirit of Antichrist, and MAY be the false prophet forerunner of The Antichrist, but Bergoglio is WAY too dumb to be the big show himself.]

I won’t belabor my entire boring story, but over the past few months, my theological dominoes have begun to fall and I have, for all intents and purposes, become a Roman Catholic. It began with Justification (Luther lied!) and then… the blessed presence of Christ in the Eucharist. I have seen the heavenly vision and I don’t want to go back.

I have read several works by Scott Hahn, devoured some of the Fathers and other sources also… including your frequent rants. “They Don’t Actually Believe Any Of That “Bullshit”  beat the hell out of me.

I am not currently pastoring a church, but I continue to teach an adult Sunday School class in a local Baptist protest party (I am increasingly loathe to call it a church).

Here is my dilemma. I am nearly on the Ark, but I feel like my mast is shredded and my provisions are few. My wife and children are mostly on board with me, but they are the only ones that know of my crisis in faith. I have attended two celebrations of Mass with them, but that has only brought increasing confusion. It is not that we didn’t enjoy the Mass… I just don’t know if it was real or maybe better, legitimate.

I can see clearly that this Pope is a flaming heretic and perhaps every Pope since Vatican II and that nearly every local church has gone right on down the bowl with them. Some “fundy” Catholics suggest that, at least in N. America, it is over. No more church. Do you agree with this Ann? [No way.] I understand your position on the form of Mass. But, would you go that far?  I know that our time is short. I completely agree with you that western civ is on life support and that we will probably soon descend into chaos and possibly even collapse.

What would you do if you were in my shoes? [Haul ass to the nearest FSSP or ICK parish.] I desperately long to confess my sins to a godly priest and to receive the Body and Blood of our Savior. I just don’t know where to turn. It seems that most if not all of the churches I can find don’t actually believe any of that bullshit.

Ann, will you pray for me and for my family? If you can offer any advice, I would be eternally grateful.

Thank you again sister for your labour of love. Please continue to be faithful and I will pray that the Lord will bestow a great measure of grace upon you.

May the Lord be with you!

There is a very strong positive correlation between the – can we just say it now? – CATHOLICISM of a parish and its priest(s) and the form of the Mass that is celebrated.  One of the great regrets of my life is that I entered the Church through the Novus Ordo, not by way of the local Tridentine Rite parish. Not only was the “instruction” desperately lacking, but so were the rites themselves.  Oh, to have been baptized and confirmed in the Old Rite! The prayers are so powerful!

So, here are two links to the two main Tridentine Mass priestly fraternities: The Priestly Fraternity of St. Peter and The Institute of Christ the King.  As I said above, peruse the list, and if there is anything within a 24 hour drive, haul ass over there ASAP and GET. IN. THE. BOAT. We are talking about the eternal fate of your soul, and the souls of your wife and children, whom God has given you charge over as husband and father.

Institute of Christ the King (full list on right side bar)

Be assured of my prayers, and probably one or two other people who read this. 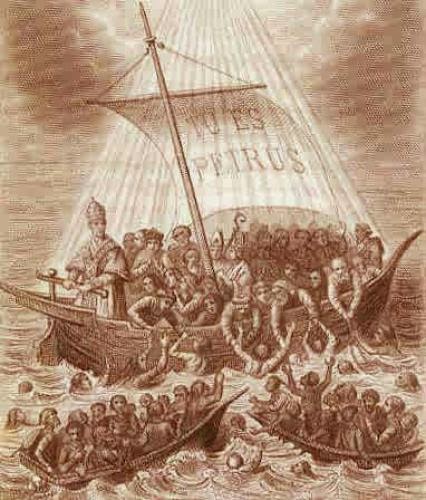