The more I thought about “The Exuberance of Sodomy”, the more I realized that the most satanic part was Paragraph 304.  In this wretched section, Francis, his ghostwriter Archbishop Oral Fixation, and whomever else signed off on this loathsome, murderous screed, contorts the Angelic Doctor, St. Thomas Aquinas, to argue that The Law is only a macro concept, and breaks down when applied on the individual level.  This is nothing less than a call for total anarchical  lawlessness.  But, this has been the keystone of the entire satanic plan.  Keep saying that MACRO concepts are unchanged (orthoDOXY, dogma, doctrine), but that MICRO application must change in order to be “pastoral” (orthoPRAXY, “inclusiveness”, “accompaniment”, “tender caressing”, “wouldn’t you be more comfortable if you took off your shirt”, “this is our little secret”, “let me heal you with my mouth”, etc.)

It is often said that no man has ever known the scriptures as well as satan and the demons.  We have now been reminded that satan and the demons know Thomas better than Thomas knew Thomas. And it is now to the point that they will start dragging writings of the Fathers, Doctors and Saints down into the pit with them.  It is total war.

304. It is reductive simply to consider whether or
not an individual’s actions correspond to a general
law or rule, because that is not enough to discern
and ensure full fidelity to God in the concrete life
of a human being. I earnestly ask that we always
recall a teaching of Saint Thomas Aquinas and
learn to incorporate it in our pastoral discernment:
“Although there is necessity in the general principles,
the more we descend to matters of detail, the
more frequently we encounter defects… In matters
of action, truth or practical rectitude is not
the same for all, as to matters of detail, but only
as to the general principles; and where there is the
same rectitude in matters of detail, it is not equally
known to all… The principle will be found to fail,
according as we descend further into detail”.(Summa Theologiae, I-II, question 94, article. 4.)
It is true that general rules set forth a good which
can never be disregarded or neglected, but in their
formulation they cannot provide absolutely for all
particular situations. At the same time, it must be
said that, precisely for that reason, what is part of
a practical discernment in particular circumstances
cannot be elevated to the level of a rule. That
would not only lead to an intolerable casuistry, but
would endanger the very values which must be
preserved with special care.

Look, what this paragraph is doing is giving all of these unctious sleazebags free rein to declare The Law – ALL LAW – to be merely a thought exercise on the broadest of terms, but that The Law breaks down and is UNRELIABLE when applied to individuals.

Let’s look at the conclusion of this citation from the Summa, shall we? (Click here to read the whole thing – it is Article 4 in Question 94)

Consequently we must say that the natural law, as to general principles, is the same for all, both as to rectitude and as to knowledge. But as to certain matters of detail, which are conclusions, as it were, of those general principles, it is the same for all in the majority of cases, both as to rectitude and as to knowledge; and yet in some few cases it may fail, both as to rectitude, by reason of certain obstacles (just as natures subject to generation and corruption fail in some few cases on account of some obstacle), and as to knowledge, since in some the reason is perverted by passion, or evil habit, or an evil disposition of nature; thus formerly, theft, although it is expressly contrary to the natural law, was not considered wrong among the Germans, as Julius Caesar relates.

Did you get that?  Yes, that’s right.  Thomas is saying that when knowledge of the Natural Law fails in these rare “matters of detail”, it is due to PERVERTED PASSION, EVIL HABIT, OR AN EVIL DISPOSITION OF NATURE.

THE BLAME IS ON THE PERSON, NOT THE LAW.

FRANCIS AND HIS EVIL MINIONS IN PARAGRAPH 304 HAVE TRIED TO CONVINCE THE WORLD THAT THE LAW ITSELF IS FLAWED AND UNRELIABLE ON THE INDIVIDUAL LEVEL.

This is in essence what people like me, Karl Denninger and others have been screaming about with regards to the Rule of Law and this business of Oligarchs and FRIENDS of the Oligarchs doing whatever they damn well please and then just scoffing at black-letter statute.  Think about such headline news today as Hillary Clinton’s email server antics – for which she will never be touched, and everyone knows it.  Think about the clearly illegal monopolistic collusion and felonious pricing of drugs and medical services which will never be prosecuted, and will keep healthcare costs ten to twenty times higher than they should be.  Think about the patently illegal mortgage dumping and foreclosure scam that pretty much all of the banks are up to their necks in, which will never be prosecuted. Think about Obamacare being used to selectively punish enemies or reward friends of the regime.  Think about all of the immigration laws being completely disregarded for musloid invaders and Marxist Latinos, and enforced to the letter against Christian refugees and contributive, law-abiding white people.  Think about PlannedParenthood being caught red-handed trafficking in baby parts, and the only prosecution is against the whistleblower.  I could go on and on…

Oh, there are laws on the books, it’s just that, well, all the Cool Kidz know that the Law doesn’t apply on the individual level. It’s just a thought exercise. Law breaks down on the detailed level, and can only be applied on a case-by-case basis.  Wink. Make that check payable to….

As I have written ad nauseam, no society can survive without The Rule of Law.  We know that secular government has been lost for quite some time now.  What we are seeing here is nothing less than the attempt by satan to purge the Law from The Church itself.  And sadly, barring supernatural intervention, it will be extremely successful.  The dissolution of the Rule of Law in Western secular government has primed the pump for this move in The Church.  Most people in the West who are paying any attention to this Francis crap are nodding their heads in agreement, saying, “It’s about time The Church entered the 21st century…”

Interestingly, in Article 6 of the same Question 94 in the Summa, the question is asked if it is possible for men to purge the Natural Law from their hearts.  The answer is that General Principles of the Natural Law can not be blotted out, but that Secondary Precepts which follow very, very closely from General Principles CAN be blotted out of men’s hearts by their “evil persuasions”, “vicious customs” and “corrupt habits”.

Just as Diabolical Narcissists freely choose to purge all love from their hearts, the resulting evil persuasions, vicious customs and corrupt habits that are corollaries to the loveless state of the Diabolical Narcissist’s soul (such as sexual perversion), themselves cause the Diabolical Narcissist to become ever-more distanced from The Natural Law, and thus he is no longer repulsed by heinous acts committed by himself or others. As we have discussed before, the more a person commits mortal sin, the more numb and more depraved they become.  It is a downward spiral, and it is fast and steep.  Men who start out looking at naked girls on the internet wind up looking at gay and child porn VERY quickly, as an example.

Earlier this week, some faggot bishop in France said this of child rape. CHILD. RAPE. :

A little later, several listeners upset by his remarks re-started the discussion and the Bishop explained: “It’s a great evil. That much is very, very clear. Is it a sin or not? I don’t know and that might be different according to each [person]. Thus we can’t generalize,” added the religious official.

“We’re on the order of sin but is this man a sinner in the strict sense of the term? I don’t know if I can say that, in every case, we can’t speak in general terms,” concluded Stanislas Lalanne.

Make absolutely no mistake – this “we can’t generalize” argument is exactly, precisely the argument being made by Francis and his minions in Paragraph 304.  Sure, there’s a general macro-level law against ASS-RAPING LITTLE BOYS, but when you get into the details, the law breaks down, and you really can’t say if ASS-RAPING LITTLE BOYS is sin in the strict sense of the word.

If they are ALREADY using this argument in terms of ASS-RAPING CHILDREN, then you have got to be out of your mind if you think this isn’t going to be IMMEDIATELY implemented with regards to adulterers, faggots, trannies and every other diabolical manifestation known to man.

And they cherry-picked St. Thomas to do it.

Pray to Saint Thomas Aquinas to call down God’s wrath.

I feel like the Russian soldier who was surrounded by ISIS in Syria and called in an airstrike on himself just recently. We’re surrounded.  Call in the bombers, and take as many of these evil bastards out as possible. 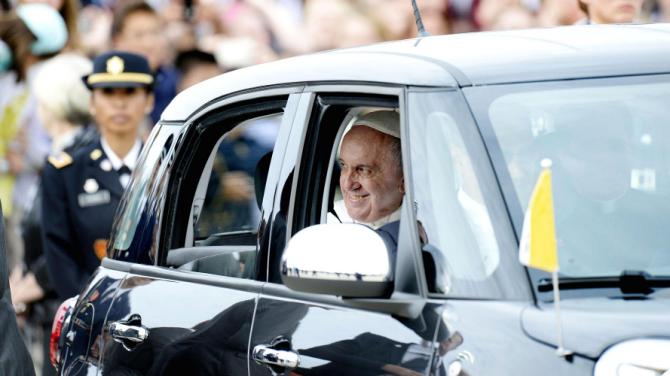