You may have noticed that pretty much everything Jorge Bergoglio says is a meaningless pastiche of drooling nonsense, punctuated by a core vocabulary of dogwhistle words, and for those of you who have actually heard him speak, the gutteral, slackjawed verbal tick, “Eehh?”

You can tell who his drooling sychopants are, because they pick up and conspicuously litter their speech and writing with these dogwhistle words and phrases.  For me, these words are now ruined – rendered totally unusable by Bergoglio and his fag toadies.  Just as no more boys can ever be named “Adolf” (Sorry Coors family!), these words and phrases will now incite spittle-flicked nutties whenever they fall upon the ears of decent, God-fearing human beings.

This is a dogwhistle for faggots.  Faggots have “encounters” in grotty toilets, bathhouses and Novus Ordo seminaries.  Encounters are brief meetings. Wham, bam, thank you, Fr. Rosica. (Go ahead and sue me Tom, you diabolical fag.  You can get in line to all claims on my non-existent estate right behind the IRS.  Heh.)

This is faggot-speak for moral relativism and/or modernism. There is no Truth, and we don’t actually believe what we believe.  Dialogue.

Bergoglio, being an illiterate moron, seems to not understand that EXCLUDE is a transitive verb, meaning it takes an object. Or does he…? For example:

The Church is the subject.
Excludes is the transitive verb.
Pertinacious heretics is the direct object.

Using exclude and include as intransitive verbs is a dogwhistle for moral relativism.

Another faggot dogwhistle.  I won’t judge you in your despicable, filthy sin.  Heck, I’ll ACCOMPANY YOU! And if you have a particularly pillowy Brad Pitt lips, why then I’ll even…

Quite possibly the single most faggoty phrase ever uttered in human history.

Well.  I guess we can never, ever, ever listen to “Love Me Tender” ever again. Thanks for ruining everything, including ELVIS, fags.

Drop this one and all fags within a half-mile radius will come running. Er, make that, sashaying. Snap.

This is the veritable Bat Signal of the fags.  Drop this one and a pink phone somewhere in Casa Santa Marta rings.  See below. 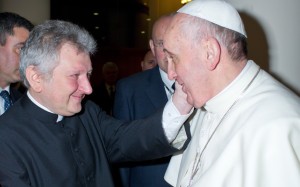 This is now a dogwhistle for any and all “victim classes”, including fags, adulterers and all aberrosexuals.  Anyone whose behavioral choices that the Church and Divine and Natural Law condemn, are unrepentant, and who will become cheering fanbois for FrancisNewChurch, can be classified as “the poor”. Oh, it is also boilerplate Marxist class warfare incitement.

Email more if you think of them.

The bottom line is this: I judge people who have conspicuously weaved any of these terms into their writing or speech since Bergoglio’s squatting on the See of Peter VERY, VERY HARSHLY.  These are shameless asskissers who are trying to weasel their way into and ingratiate themselves before the FrancisNewChurch Mafia.  Make absolutely no mistake, people who pick up and use these now wretch-inducing terms are throwing billowing smoke signals that they are for sale and ready to play ball with Bergoglio, his toadies and their utterly satanic pro-sodomy, anti-Christ agenda.

You can smell ’em a mile away.  If you come across anyone using this fetid sodomite dogwhistle language, run in the opposite direction before you or someone you love gets tenderly caressed in an unwanted body-to-body accompaniment.