1.  Changing it up, I’m going to start with the pretty music first.  This is one of my favorite pieces of music – it’s like heroin except without the whole “dissolving your teeth out of your head” part. I warn you, once you go here, it will live forever in your mind.  This is an instrumental bluegrass cover/arrangement of (stay with me) Jimmy Buffet’s “A Pirate Looks at 40”.  I have always appreciated the MELODY of APLA40, but, obviously, loathed the whole Jimmy Buffet wallowing in stoner-drunk-loserdom thing, and always thought it would be cool to re-lyric the melody.  Well, lyrics schmiricks.  If you have a pretty melody, JUST. GO. INSTRUMENTAL.  And if you’re really awesome, get a mandolin involved.  And it just showed up on YouTube.  Here ya go.  It is best turned up loud, or with good headphones.

2.  Remember, the monthly Holy Sacrifice of the Mass for all of my benefactors and supporters is tomorrow.  It is the feast of St. Raymond of Penafort.  He was a canon lawyer, and was all about converting the Jews, musloids and heretics.  Because WHEN YOU ACTUALLY BELIEVE IN GOD AND HIS HOLY CATHOLIC CHURCH, YOU PROSELYTIZE AND TRY TO WIN CONVERTS, BECAUSE THERE IS ONLY ONE TRUTH, AND THUS IT IS A MORAL IMPERATIVE TO TELL AS MANY PEOPLE AS POSSIBLE ABOUT IT.  And also, when he needed to travel over water, he would windsurf on his spiffy Dominican mantle.  This is so cool:

Saint Raymond accompanied the King of Aragon on an expedition to Majorca and boldly rebuked him there for giving public scandal. However, finding that his rebuke had no effect on the King, Saint Raymond prepared to return to Barcelona. The King attempted to keep Saint Raymond on the island by force, but Saint Raymond flung his mantle into the sea fastened to the end of his staff, serving as a mast, and sailed on his mantle, like a boat, the nearly 100 miles back to the mainland. On reaching Barcelona, Saint Raymond took up his mantle, which was perfectly dry, and was transported through the locked doors of the convent and beyond the acclamations of the crowd that witnessed his landing. Touched by the miracle, the King of Aragon thereafter renounced his evil ways and led a good life. 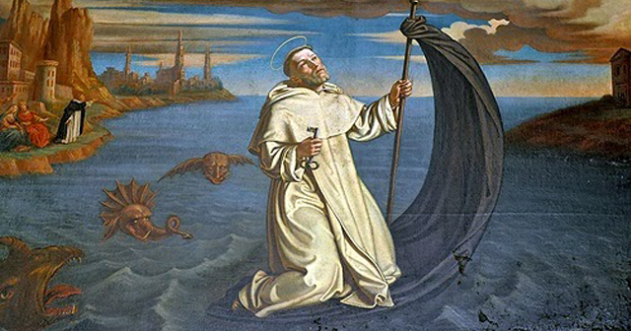 The original and never-to-be-topped “I am OUT OF HERE!”

3.  While we’re in the groove of super-manly quotes, a perennial favorite from Louis Cardinal Pie and his Christmas homily of 1871. Cardinal Pie was a favorite of St. Pius X (our Father in God), and I’m sure you’ll see why here. Read this, in all of its eloquence, until you understand:

“Is not ours an age of mis-lived lives, of un-manned men?
Why?

Because Jesus Christ has disappeared. Wherever the people are true Christians, there are men to be found in large numbers, but everywhere and always, if Christianity wilts, the men wilt. Look closely, they are no longer men but shadows of men. Thus what do you hear on all sides today? The world is dwindling away, for lack of men; the nations are perishing for scarcity of men, for the rareness of men. I do believe: there are no men where there is no character; there is no character where there are no principles, doctrines, stands taken; there are no stands taken, no doctrines, no principles, where there is no religious faith and consequently no religion of society.

Do what you will: only from God you will get men.”

4.  Here’s a quote from St. Terese of Lisieux via a Zed Thread that also bears frequent repetition:

‘Celine, during the SHORT MOMENTS that remain to us, let us not lose our time . . . let us save souls . . . souls are being lost like flakes of snow, and Jesus weeps, and we. . . we are thinking of our sorrow without consoling our Fiancé . . . Oh Celeine, let us live for souls.” Correspondence July 1889 from the book, General Correspondence: 1877-1890

5.  A bit of housekeeping on the YouTube front.  Yes, YouTube scrubbed my ARSH 2011 “Islamic Sexuality: A Survey of Evil” video series from MY YouTube account, which is why I strongly encourage and appreciate other people MIRRORING my YouTube stuff.  Mirroring is the ultimate hedge against censorship.  I don’t care about my own personal view count – none of my vids are monetized.  I just want the info out there.  That’s the point.  So, here it is in one video.  There are countless mirrors though if you type “Ann Barnhardt Islamic Sexuality” into the YouTube search box.