I am going to repost something relatively recent tomorrow, from May of this year, because it is so incredibly important, and, once again, extremely prescient since the disastrous, heretical Synod mess of a few weeks ago.  First, several points to make everything as blunt, forthright and clear as humanly possible.

1.  The title “The Cool Kids don’t actually believe any of that bullshit…” stays.  There are all manner or references to fecal matter in scripture, and I insist that one and all be confronted with the full strength of the contempt and rage that these people give every possible indication of having for the Truth.  “Stuff” doesn’t cut it.  “Stuff” is neutral.  They don’t think it is “stuff”.  They think it is BULLSHIT.

Okay.  Pope Francis Bergoglio is dumb.  He is an unintelligent man.  He washed out of a doctorate program in Germany in the ’70s because he couldn’t hack it, which is saying something indeed, because the ’70s weren’t exactly intellectually rigorous.  His extemporaneous speech is incoherent, wandering, rambling, nonsensical fog banks of thought.  I have been told from EYEWITNESSES to his “sermonettes” every morning in Rome that he will literally lose his train of thought in mid-sentence (not that he actually speaks in COMPLETE sentences mind you), stand staring into space for 20 seconds, and then pick up on a completely different train of thought.  His statements are staggeringly idiotic pastiches of meaningless buzz words, catchphrases and tropes.  In other words, he speaks like the typical dimwitted 1970s Jesuit, post-modernist that he is.  Just two examples from the past couple of weeks are these gems:  “Corruption is worse than sin” and “Judas Iscariot wasn’t the worst sinner among the Apostles”.  These are terrifying in their stupidity.  Corruption IS a sin, so how can sin be worse than sin?  And Judas Iscariot betrayed our Lord and then COMMITTED SUICIDE.  I wonder, which of the other Apostles could beat suicide and Deicide?  Hmmm.  Maybe Saint Andrew smiled insincerely, like a flight attendant, once.  These are just two tiny examples from the past couple of weeks.  I have also been told secondhand that people who have been inside the living quarters at the lavish, massive new papal suite (in as much as TWO ENTIRE FLOORS can be called a mere “suite”) that Pope Bergoglio immediately commissioned (in his dazzling, dazzling humility) that there are NO BOOKS.  The man doesn’t read.  Anything.  Including these documents that come across his desk.  This may be a function of trying to establish plausible deniability, but it is also probably because dumb people find reading to be hard.

Now you may be thinking that I am just insulting the Pope because I enjoy it.  No.  Are you kidding?  This is AWFUL.  But, it is ESSENTIAL to understand, and I’ll bet that you will recognize why from experiences in your own life when I lay it out.  As I have railed for years, our culture is so degraded that stupid people have more worldly success than smart people.  Stupid people are running the show, and are aggressively promoted up the various ladders and chains of command.  The government, the military, the universities, the corporations, and yes, the Church.  Anyone with two brain cells to rub together has two choices: keep one’s head down and mouth shut and resign oneself to mediocrity, or go out on your own and prepare to be attacked and vilified for the duration.

Now these stupid people, like Bergoglio, are just smart enough to be terrified of having their intellectual mediocrity found out – they live in terror of it, in fact.  And here is where we get to the meat of the issue.  These stupid people, in their pathological need to be THOUGHT intelligent by the world, utterly despise … wait for it … the SUPERNATURAL.  We have eighteen months of this Bergoglio train wreck, and a massive dataset to draw from.  Bergoglio is CLEARLY a materialist, who beyond that seems to lack any belief or reference to anything SUPERNATURAL.  Why does the Pope not seem to care one whit if people receive the Eucharist in a state of unrepentant mortal sin?  Because the entire question pivots on a supernatural fulcrum, namely the Real Substantial Presence of Jesus Christ, Body, Blood, Soul and Divinity, in the Eucharist.  If one strips away, disregards or denies this SUPERNATURAL truth, then, yeah, why the hell can’t people come up and get their symbolic community meal cracker at Mass?  What’s the problem?  That’s mean, and if you’re mean and don’t give people the symbolic cracker, then they won’t like you, and won’t come to your church, and won’t give you money and tell everyone how dreamy and awesome-sauce you are.

Now let’s look at the SUPERNATURAL institution of the Church Itself.  The Church is the one and only SUPERNATURAL Body of Christ, and the one and only SUPERNATURAL Bride of Christ.  If we deny the SUPERNATURAL, then the “church” is just a human organization, one among many, with no special claim to authority.  The Church stripped of its SUPERNATURAL nature is a philanthropic clearing house, lobbying firm, property management company, and an NGO for craven careerists to game for every Peronist-Fascist centavo and scrap of worldly political power it can.  Note well the use of the verb “to game”.  It’s power and glory for power and glory’s sake.  Stake out teams within the matrix of this playing field called “the church”, and then its “us” against “them”.  Play the game.  It’s all about the game.  There is nothing beyond the game.

These people are stupid, and they are worldy, and thus they are humiliated and enraged by the SUPERNATURAL and by people who talk openly about the SUPERNATURAL, because they think that the world will think that they are stupid if they are seen to believe in things which cannot be proven with modern science (yes, that’s a laugh-out-loud line).  This is EVERYWHERE.  Heck, I remember when someone saying out loud the things I now say on a regular basis would have made me cringe and squirm and find the nearest exit.  How many of you readers originally happened upon this website because of my financial commentary, but find yourself reading my religious pieces?  And how many of you feel EMBARRASSED reading about Jesus Christ and His love for us?  How many of you feel that knot of unease in the pit of your stomach?  How many of you, because of this embarrassment feel ANGER towards me for saying the things I say?  How many of you are angry at me for subjecting you to my “religious rantings” in order to get to my financial posts?  How many of you have thought, “Why can’t she just focus on the financial stuff, or at least sort the posts so we don’t have to be subjected to her holy-roller BULLSHIT?”

Uh-huh.  I know.  I read enough of my email to know.  And do you know what the difference is?  Do you know why I am completely willing to “embarrass myself” in the eyes of the world?  Well, let me put it this way.  When I lie awake in bed worrying about the things I worry about, the question, “I wonder if people think I’m smart?” is NOT on the list.  And so not only is the SUPERNATURAL reality of God and His Holy Church not a scandal or an embarrassment, it is irresistibly attractive to me to the point that I cannot but attempt to tell as many other people about it as possible.  And frankly, if the fact is that I can in one breath be talking about fractional reserve coefficients and in the next about the Holy and August Sacrifice of the Mass, well, so much the better.  Do I tie your guts in knots of embarrassment and make you blush with shame for even silently reading about Jesus Christ and hearing His Name ring out in your mind?  Good.  GOOD.

3.  Finally a quick word about Francis’ latest rhetoric.  He was jabbering about fake, “pagan” Christians.  Here is what I suspect he is setting up with this.  Bergoglio was immediately reported as despising pre-Asteroidal (circa ARSH 1965-69) liturgy, aka the Traditional Form of the Roman Rite, and to this day gives the strong appearance of being deeply, deeply disinterested at best at even Novus Ordo liturgies.  Photographers in Rome joke that getting a “good picture” of Francis at Mass is tough because he physically comports himself like a bored child, and has a nasty habit of looking at his watch, rolling his eyes, and sighing heavily.  Hmmm.  Well, I suppose if one disregarded the SUPERNATURAL realities of the Mass, it would seem boring and a waste of time, wouldn’t it?  I mean, we should all be out giving free stuff from the government to the poor so that we can smell like them and accompany them body-to-body, or something, right?  That would be a much better use of everyone’s time than these symbolic old  rituals, verdad? 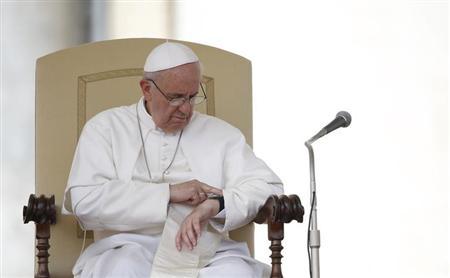 I suspect that Pope Francis is going to plant the rhetorical seed that the Traditional Liturgy itself is “pagan”.  Ornate vestments, precise rubrics, movements and postures, strict prayers with zero opportunity for improvisation or the expression of personality, and most especially, the fact that these liturgical traditions are not just OLD, but ANCIENT.  Given his oeuvre, it is undeniable that the one and only thing which he seems to be “intolerant” of and “unmerciful” towards is ROMAN CATHOLICISM, and I refuse to qualify that further.  Tell me, who else do you think he could be talking about given his bootlicking of every other faux-religion and heretical and schismatic Christian sect, and his declaration that proselytism is “solemn nonsense”?  I’m all ears.

Gentlemen, the strategy of laying low cannot and will not work.  They are coming, and they are coming for you.  The only thing laying low and cowering will accomplish is making it faster and easier for them to defeat you.  This is the “end game”.  This is their “final solution”, and I use the term without hesitation.  There will be no negotiations, no truces, no honorable parleys.  They want everything pre-Bugnini exterminated from the face of the earth, INCLUDING ITS MEMORY.  This is already more than 90% accomplished.  This is the last push to guarantee that one generation from now it is 100% accomplished.  Now, it is certain that the Gates of Hell will not prevail, but it is not certain that the Church must schism and be reduced to the worst-case-one-valid-Mass-per-day.  That is up to us.

4.  One last tiny point.  Do NOT make the mistake of thinking that stupid people are incapable of malignancy.  Oh, that’s lethal.  I know we have been culturally conditioned to believe that lower intelligence BY DEFINITION means purity of heart and intention.  This is false.  Stupid people can be every bit as malignant as smart people, and conversely, smart people can be good.  That regression analysis would have a very low R-squared, indeed.