Our Father, Who art in heaven, hallowed be Thy Name. Thy kingdom come. Thy will be done, on earth as it is in heaven. Give us this day our daily bread. And forgive us our trespasses, as we forgive those who trespass against us. And lead us not into temptation, but deliver us from evil. Amen. PATER NOSTER, qui es in caelis, sanctificetur nomen tuum. Adveniat regnum tuum. Fiat voluntas tua, sicut in caelo et in terra. Panem nostrum quotidianum da nobis hodie, et dimitte nobis debita nostra sicut et nos dimittimus debitoribus nostris. Et ne nos inducas in tentationem, sed libera nos a malo. Amen. 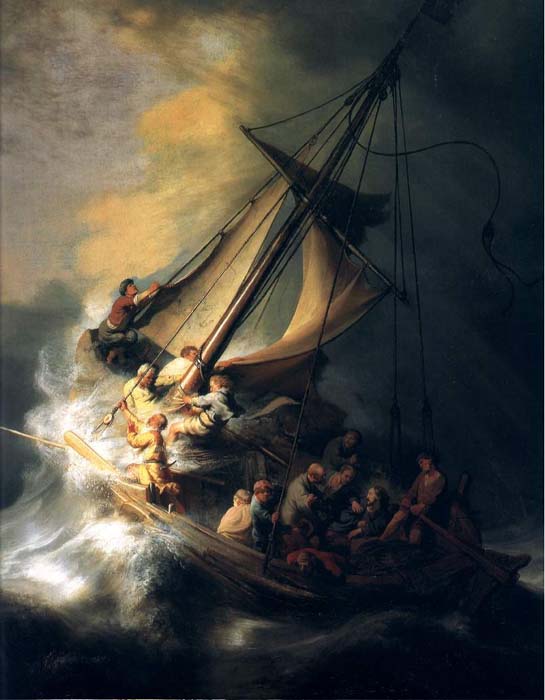 Master, doth it not concern Thee that we perish? Mark 4: 38. Rembrandt, Christ in the Storm on the Lake of Galilee. ARSH 1633. Oil on canvas. Isabella Stewart Gardner Museum, Boston

And there arose a great storm of wind, and the waves beat into the ship, so that the ship was filled. And He was in the hinder part of the ship, sleeping upon a pillow; and they awake Him, and say to him: Master, doth it not concern thee that we perish? And rising up, He rebuked the wind, and said to the sea: Peace, be still. And the wind ceased: and there was made a great calm. And He said to them: Why are you fearful? have you not faith yet? And they feared exceedingly: and they said one to another: Who is this (thinkest thou) that both wind and sea obey Him?  Mark 4: 37-40 A friend sent me an email the other day with the following line, elegantly articulating the current Synod disaster: “The apostles are, as usual, showing off as the waves smash around; we pray for them and they remain despite their sometimes startlingly sub-average intelligence – the thread that binds us to the Master sleeping under the poop…. To Him be all glory.” The Poop is the raised deck or cabin in the stern (the hinder part) of a boat or ship.  That is where Our Lord was having His little snooze.  This is, it is ever-more difficult to deny, the worst tempest to ever toss the Barque of Peter.  The past heresies, especially those in the first thousand years of the Church, including Arianism, Donatism, Manichaeism, etc., were all – I can’t believe I’m typing this – SUBTLE compared to what is going on now.  What is going on now is new territory – the denial of the NATURAL LAW, which by definition human beings can easily know and understand even OUTSIDE THE CHURCH.  All human cultures know and understand marriage.  All human cultures know that sodomy is wrong.  All human beings, including those who NEVER knew or know the Church will be judged on the Natural Law.  The pre-Columbian Amazon Basin dweller was/will be judged on the sin of Sodomy, because sodomy is known to every human being as grave sin through the Natural Law. But, we must trust Our Lord, even though it seems that He is having a nap while this all goes on.  How can we be surprised by this?  How can our faith be shaken when there have been countless prophecies and apparitions of Our Lady warning of exactly these events, as it is now crystal clear?  Cardinal against Cardinal and bishop against bishop, mass apostasy, confusion about who actually is the pope, a “destroyer pope”, and on and on.  La Salette, Akita, Fatima, St. Franics….  And, as I and many others have said over and over again, how could we POSSIBLY expect God to continue to bless a culture that is the largest cult of child sacrifice, sodomy and theft ever seen in human history?  How could we expect God to turn a blind eye to the sacrilege and heresy that is endemic to almost every Novus Ordo Mass offered on the planet for the last 46 years – while the entire Church sat in the silence of complicity, more concerned with worldly approval than the Sacred, Wounded Heart of Our Blessed Lord, and His Mother? So, yes, He is sleeping under the poop as the storm rages, as my friend put it, but we must remember His admonition: Why are you fearful? have you not faith yet? He will rise up, and He will say, “Peace, be still.”  And the Barque of Peter will be saved from these devils, and it will lower its nets and bring in a great harvest of souls.  We know this.  We CANNOT doubt this.  So, while I, in my weakness, like everyone else, keep thinking, “Please wake up, please wake up, we’re dying, we’re dying”, I am just going to go back to the poop deck and kneel down next to Him, stare at His Holy Face and watch Him sleep until He sees fit to wake up.  And if I do that, I know that I will be totally and completely safe. See you on the poop deck!