1.  I will continue to write commentary on current events in order to get as many people as possible to move to the Poop Deck (see post below) instead of jumping overboard, which is death.  I have learned from the metaphysics class that it is indeed important to know and understand the CAUSES of things.  It is important to understand people and circumstances as exhaustivly as possible, because this is how they become intelligible.  Without knowing causes, the world becomes unintelligible.  This is why I won’t “drop” the whole issue of Obama’s origins, puppet masters and ineligibility.  This is why I have railed since literally day one of the Francis pontificate about his actions in Buenos Aires and his Peronist-Fascist-Jesuit politics.  You can’t make heads or tails of Obama’s and the Washington regime’s actions if you refuse to investigate much less accept who these people are, and thus the CAUSES.  You can’t make heads or tails of the Francis pontificate if you refuse to investigate and deal with who he is, what he has done, and what he believes.

Q.  How could Obama and the Washington regime be so seemingly inept?
A.  They AREN’T inept.  They WANT what remains of the US to collapse.  They WANT to facilitate the reformation of the Caliphate.  The WANT to create as many crises as possible, because crises and chaos enable them to grab more power.

Q.  How could Pope Francis keep making blunder after blunder, saying and doing things that are turned into massive media victories for the enemies of The Church?
A.  Because they aren’t blunders.  It is all but certain that he knows exactly what he is doing, and the effect it is having.  It is all but certain that his objective is amassing as much personal power as he can through worldly popularity, and everything else, including The Church and the souls of every human being on the planet, can LITERALLY be damned in service to that goal.

If we investigate and accept the objective reality of the CAUSES of things, then and only then are they intelligible, and then and only then can we formulate correct responses built on a solid foundation of the Truth.  Failure to do this leads to such consequences as the overthrow and destruction of one’s country, or losing one’s faith.  This is why Pollyannaism is so dangerous and devoid of any virtue whatsoever.  We must move to the Poop Deck not because we deny that there is a storm – we go to the Poop Deck precisely because we acknowledge that there IS a storm, and that it is only Our Lord who can and will save us in the fullness of His time.

2.   Let’s talk about Concupiscible and Irascible Appetites, because understanding what they are and how they get perverted explains a lot.

(* We don’t actually HATE Justin Bieber, and in fact we must pray for that repellant little jerk-wit, because man, it’s not looking good for him if he wraps his Ferrari around a light pole this afternoon.  But you have to admit, the Bacon-Bieber thing was a pretty awesome pedagogical device, huh?)

Now the Irascible Appetites.  This is what makes our souls long after DIFFICULT goods – in other words, things that require us to overcome something unpleasant in order to achieve something virtuous or good.  A very base example that springs to mind is the muscle soreness that goes along with all forms of exercise.  Because we are rightly attracted to the idea of being physically sound and fit we exercise in spite of and push through the unpleasantness of the fatigue and soreness in order to achieve the good of physical fitness and strength.  The highest example is carrying our crosses through life in this Vale of Tears in order to achieve the very attractive goal of heaven.  If our goal is obtainable, then we have HOPE.  If the difficult good is something unobtainable, then we experience despair.  Contrariwise, when we encounter evils that are surmountable, even though they are repulsive we must have COURAGE to meet those evils and overcome them in order to achieve the good beyond, such as sacrificing material possessions, money or public esteem in order to do “the right thing” rather than capitulate to evil.  Yes, the idea of losing all one’s worldly goods, or even one’s life, is certainly repulsive, but courage overcomes the repulsion.  This is why Courage is the Fruit of the Third Sorrowful Mystery of the Rosary (the Crowning with Thorns).  If the difficult evil is insurmountable, then we experience FEAR.

Pope Francis is a Modernist and a Materialist.  He views the world and human beings as material, economic units.  He does not have a proper balance between the Concupiscible and Irascible Appetites.  He is focused almost entirely on the CONCUPISCIBLE appetites.  This is why he talks almost exclusively about people in terms of their MATERIAL WEALTH.  The Poor, The Poor, The Poor.  Not the Poor IN SPIRIT, because that encompasses BOTH the concupiscible and irascible appetites.  No, with him, being a Peronist-Fascist, which is a subset of Marxism, the world and human beings are framed completely by the concupiscible SENSE appetites.  So, give “the poor” more free stuff.  The biggest problems in the world today are “youth unemployment” and “the loneliness of old people” – NOT sin or the consequences of sin, namely the loss of heaven and eternal damnation to hell, which are supernatural realities.

What this skewed emphasis on the Concupiscible Appetites leads to, as we see with Francis, is Materialism, which then feeds selfishness, pride and the gaping maw of the ego.  Me, me, me.  I want to get to go up to Communion like everyone else, because I FEEL excluded.  I refuse to believe that anything that makes a person “FEEL GOOD”, including adultery, contraception, fornication and sodomy, could possibly be a sin, because me, me, me, me.  But enough about me.  Let’s talk about ME.  If I give you free stuff, or tell other people that they should give you free stuff, and if I tell you that your sins aren’t sins and OF COURSE you can come up and have Communion because that will make you FEEL good, and then you will like ME!  Because who cares about virtue and carrying crosses.  Blah, blah, blah.  No one wants to hear about sin and judgment and hell and redemptive suffering and old-fashioned Catholic nonsense like that.  The only way for man to achieve happiness and thus perfection, is through MATERIAL WEALTH.

This kowtowing to the Sense Appetites to the specific exclusion of the Virtuous Appetites generates the adoration of the teeming throngs (aka “economic units”) and thus feeds the pride and ego, which is the goal of the morally crippled man.

Given this, we are confronted with a very troubling pattern.  Pope Francis does not seem to oppose abortion because it is morally wrong to murder an innocent human being.  If you look back at his remarks about abortion and how he frames them, it seems that even his anti-abortion stance is framed in the context of materialism and human beings as economic units.  He speaks of abortion as a symptom of a “throw-away culture”.  He complains that one of the great evils in our time is how we throw away food – a material commodity.  And sometimes within the very same train of thought compares abortion to the throwing away of food – except it is the throwing away of a baby.  A human being is not a material commodity, but Pope Francis seems to parse these ideas within the same framework: a materialist framework.  Murdering babies is wrong not because a “unit” has been “wasted”.  It is wrong to murder a baby because every human being is a SUBJECT, with the primordial right to life so that he may know, love and serve God in this world, and be happy with Him forever, gazing upon the Beatific Vision for all eternity in the next.  And, as Our Lord tells us again and again, this world is a Vale of Tears, the gate is narrow, and the only way to heaven is to take up our crosses and be crucified with Christ.  These words speak to the IRASCIBLE appetites far, far more than the concupiscible sense appetites.  Pope Francis gives every indication of being deeply, deeply unsound on these truths.

3.  With regards to the Synod, we have to understand that the damage is already done.  The lying propaganda has already been promulgated and the world now believes, thanks to the satanic media, that the Catholic Church has abrogated not only the 6th Commandment, but also the entire notion of sin, the Natural Law, and Truth itself.  It is done.  It is a fait accompli.  Millions if not billions of people have been CONFIRMED in MORTAL SIN.  And Pope Francis is loved and hailed as a hero for doing it, or at least enabling it to be done.  I engaged a waiter at a restaurant in small talk a few days ago, and the first thing out of his mouth was praise for Francis.  It went like this:
“Yeah, I left the Church and haven’t been to Mass since 1991, but I really like Francis.  He is more gentle.  He’s really good.”  Why does this likely apostate like Francis?  Because Pope Francis has probably thrown a bucket of water on the last little flame of guilty conscience inside that man’s heart – Pope Francis has removed that last little thorn digging at his heart for his likely sins, his failure to confess them, and even his rejection of Jesus Christ and His Church itself.  This makes Francis “gentle” and “good” in the eyes of the world.

4.  Finally, I was in a different restaurant a couple of weeks ago and the waiter was a transvestite.  Not a drag queen, but a man who was clearly trying to pass as a woman.  I called him “Miss” when flagging him over to the table, and when he approached and spoke, only then did I realize it was a man.  Even though he was clearly TRYING to pass for a woman, I still felt guilty for calling him “Miss”.  And then, during a conversation about all of these horrific goings-on in the Church and the damage that Francis and the rest of them have done whilst sitting in the same restaurant with the tranny waiter flitting past, I was suddenly quite overcome, to the point of tears, by the fact that the odds were extremely high that the waiter, if he dies any time soon, will be lost to hell, and that Pope Francis actually has INCREASED those odds tremendously.  Work-a-day people have heard from the Pope himself and now mistakenly believe more strongly than ever before that mercy is permissiveness.  Now map that onto the entire planet, and feel the horror.

That’s 1900 words.  If you will excuse me, I am going to confession now, and then spend some quality time kneeling beside Sleeping Beauty trying not to be scared back on the Poop Deck. 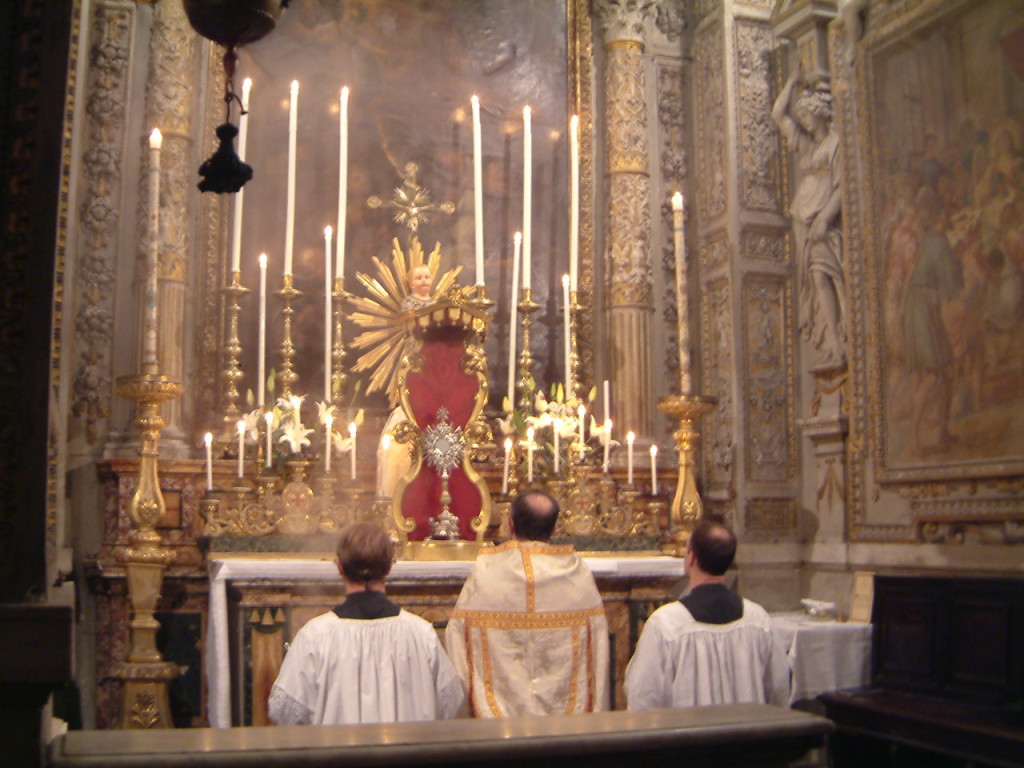