1.  Let’s revisit the interview I gave to the good folks over at IOwnTheWorld.com the day after my Koran Burning video went viral back in April of ARSH 2011.  IOTW has pruned their archives and it is no longer available there in full, but here is the AmericanDigest.org piece linking to it, with excerpts.  I’ll just post this one question and answer.  Remember, this is from three years ago.  #TOLDYA  Too bad the Constitutional Republic has been overthrown and the remaining putrifying carcass of the “three branches”, bureaucracy and military is fully infested by agents of the Caliphate.  Too late.  It’s gonna get ugly.

Ann – Declare war against the Caliphate, just like we did against the Third Reich. Same bloody thing. And I’m not kidding.

2.  Let’s go back even further in the ol’ time machine to ARSH 2010, before I had gone uber-viral.  Old timers around here will remember that I bought two billboards on eastbound I-70 just outside Ft. Riley, Kansas on the eastern edge of Junction City, Kansas.  Several readers even pitched in cash donations so that they could have a piece of the action without making themselves IRS targets (um, yeah, #TOLDYA about the malicious auditing).  They were there until I went to live in “The Van Down By the River (™)” in the spring of ARSH 2013. 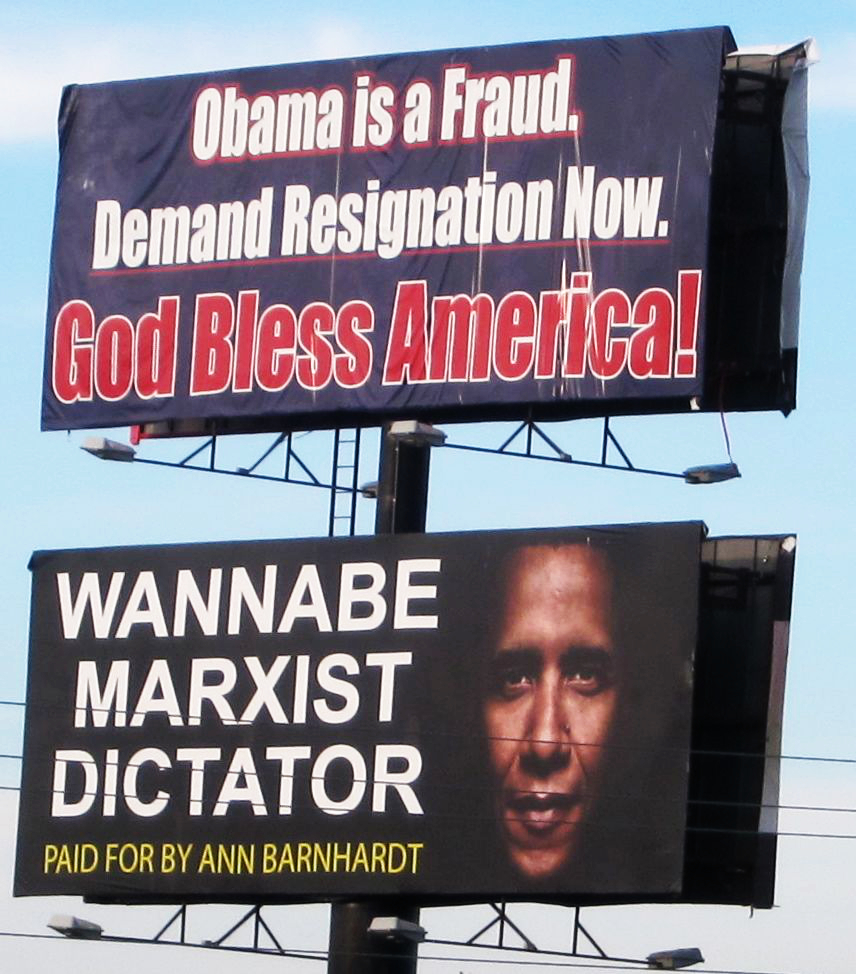 The top one (Obama is a Fraud – Demand Resignation Now!) was first, and when the community college that had the billboard in the space below became *scandalized* by it, they demanded that their billboard be moved.  The manager of the company then offered me the right of first refusal on the space and I naturally jumped at it.  By that time enough had happened that I was ready to go to war.  Hence the “Wannabe Marxist Dictator” billboard.  Um, again: #TOLDYA.  Every time I would drive that stretch on business trips to Kansas I would roll down my window and let forth with a mighty war whoop.  Anyway, here is an interview that I gave to a very hostile commie rag out of Kansas City about the billboard.  I gotta say, the dude was fair and polite and reprinted everything I sent him, and even accepted a correction a sent him.   Here is an excerpt:

2. While I see and understand your point, after watching the Obama regime do what they have done with regards to spending and the truly unprecedented increases in debt (I concede that GWB engaged in the same, but on a minutely fractional scale), their blatant disregard for and manipulation of the Constitution and rule of law vis-a-vis the legislative process (passing the ObamaCare bill via reconciliation), and the inexplicable failure to respond to the oil spill (which could have easily been a huge public relations win with minimal effort), coupled with Obama’s past and current intimate associations with radical Marxist anti-Americans, I can not come to any reasonable conclusion other than the willful malicious intent of these destructive, lawless acts. Given this, I feel that it is my moral obligation to alert as many people as I possibly can to this so that whatever harm can still be averted is averted. Having said this, I truly hope that I am wrong and that 10 years from now you can laugh at me and call me “crazy”. That would be the BEST POSSIBLE outcome, and one that I pray for daily. But at this point, I am completely unconcerned about “offending” anyone or “making people feel uncomfortable”. Sometimes offense and discomfort are the only ways to get peoples’ attention. So be it.

3.  Here is a very kind email.  I get quite a lot of these.  I continue to be amazed at how many apologies I get, and also by the number of extremely hostile comments around the innerwebz about me that contain blunt concessions that what I have said is true, or that my logic cannot be argued – but that I am still a physically repellant nut.  (I can’t stand that ugly, shrill, holy-roller religious whack nutcase, but she’s right…) I never see such concessions made to any other pundit/commentator/screeching harpy.  It’s weird.  Anyway:

I hope this finds you well.

I have to admit, my exposure to you in the past has not been favorable. You just didn’t grab me. You struck me as out of place, pink gun and all. So, I shooed you out of the way.

But, I happened upon “Big, Fat Told-Ya-So” and was edified. So, I kept reading. Your piece on being ashamed kicked me around pretty good. I thought to read it to my wife…when I stop squirming a bit.

I’m adding you to my reading list. I now feel somewhat robbed for my previous prejudices towards you, but once I read your FAQs, the air cleared. I hope you don’t mind the previously ignorant and admittedly so entering the circle.

And I hope to remember to throw some lunch money your way. I’m glad to see another person “opt” out of this system and this world as we have…and to demonstrate how like Christ we can live depending solely on God and not on the trappings (read dole) of this world.

Take care and many blessings to you and yours.

4.  I saw this piece two weeks ago and, once again, I have been confirmed.  When I say that there is no hope in Washington D.C., I’m not just running my mouth.  Therefore, anyone, and I do mean ANYONE who is still engaging that system is either hopelessly stupid and deluded, or a con-artist.  It’s all kabuki theater, and these political campaigns and candidates are about one thing:  the money.  All campaigns are about is raising money from gullible people and then invoicing and cross-invoicing their buddies who set up sham companies under the guise of “campaign consulting”.  The Tea Party Express “raised” $9.5 million at a cost of $8 million (invoicing and cross invoicing “consultants”) and gave only $400k to campaigns.  This is all a function of the post-Christian, post-American sports culture mindset.  There is Team A and Team B and everyone is desperate to root, unconditionally, for “their team” so that they can belong to and be loyal to something.  Because, you know, belonging to and being loyal to OUR LORD AND HIS HOLY CHURCH is so passé in this glorious, enlightened, evolved, sophisticated modern culture.  Nature abhors a vacuum, y’all, and that’s what this culture is: a giant, sucking vacuum.  If you can’t see that the consultants are the ones who established the entity in the first place in order to bleed it dry after cravenly identifying a new political demographic cash-flow vein they could tap, then I just don’t know what more I or anyone else can say or do.

I beg you, remember the Barnhardt Axiom:

Seeking and/or holding office, especially national-level office, is, in and of itself, proof that a given person is psychologically and morally unfit to hold public office.

5.  And now something beautiful.  Nat Cole’s cover of “(I Love You) For Sentimental Reasons”.  Sigh.