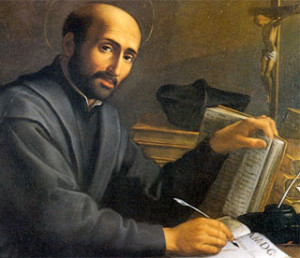 St. Ignatius of Loyola, founder of an order referred to as the “Jesuits”, not to be confused with the horrific, horrific cancer infecting the Church and the world today, which cunningly goes by the same name.

Poor, poor St. Ignatius of Loyola.  Read this simple bio and then tell me that the so-called Jesuit order of today, a wretched hive of heretics, Marxists and sodomites, is the same thing that this saint founded:

Ignatius, courtier and knight, was wounded at the siege of Pamplona.  During his long convalescence the reading of the lives of the saints revealed to him that the Church Militant needed an army of glorious soldiers to fight the forces combined against it: pagans, mohammedans, protestants, etc.  He founded the Society of Jesus and as first General of this new spiritual chivalry he moved to the attack under the motto: “Ad majorem Dei gloriam – To the greater glory of God!”  He died with the Holy Name of Jesus on his lips ARSH 1556.

St. Ignatius of Loyola, pray for us that we may be defended against the wickedness and snares of the thoroughly infested “jesuit order” of today, which we know has nothing to do with you.