As an opening to this repost, I have to link to Judi McLeod’s piece from today “The Road to Hell Obama is taking the world down created by U.S. Catholic Bishops”.  In it she restates the myriad connections between the infiltrator Communist-sodomite bishops and priests in the Catholic Church, Saul Alinsky and the Chicago Communist Machine that spawned Obama.  I stand foursquare behind Judi’s piece, because it is true.  It does not contain one shred of anti-Catholicism any more than a stage-4 cancer diagnosis contains racism.

When I have screeched, caterwauled and POUNDED for the last however many years that the Catholic Church has been massively infiltrated by Communists over the last century, who then actively recruited homosexuals, I haven’t been merely throwing around mindless pejoratives.  When I make posts about the Eucharist and the catastrophic changes made to the Mass in the 1960s, I hope that some of you out there have the light bulb go on over your head and realize that IT’S ALL CONNECTED.  If you want a conspiracy theory that is ACTUALLY TRUE, and has more meat on it than you could possibly imagine, this is it.

Everything we are seeing happening right now in real time before our very eyes: Obama, the overthrow of the US and the attendant run-up to World War 3, the reformation of the islamic Caliphate, the economic crimes and creation of catastrophic debt loads, the destruction of the healthcare delivery matrix, the transformation of education into contra-education, the destruction of and hatred of beauty and the elevation and worship of ugliness, and the ascendancy of the satanic sodomite anti-culture, all of this – all of it, can be traced back without too many degrees of separation to these Communist-sodomite infiltrators of the Church and the attempted destruction of the Church, with the primary and “keystone” target being the Holy Sacrifice of the Mass.  The reason why Western Civilization has capitulated to this attack with near-zero resistance is because of the mass-apostasy caused directly and as-intended by the “reforms” subsequent to the Second Vatican Council.

And just to reiterate, I will never, ever, ever leave the Church, because I do not worship men, I worship God, and God physically subsists nowhere else, and salvation is possible through no other means than the One, Holy, Catholic and Apostolic Church.  Extra Ecclesiam nulla salus.  No matter how complete the infiltration is, no matter how utterly, utterly horrific the pope may be, I will never, ever, abandon Our Lord or the Holy Sacrifice of the Mass.  The Church is never more like Christ, and never closer to Him in this Vale of Tears, than when she is scourged and crucified by her own, just as her Divine Spouse was.

The following was originally penned and posted on July 23, ARSH 2012.

Over at the Blaze, they’re running a headline piece on Phyllis Schlafly’s new book, “No Higher Power”.

Schlafly has the entire paper trail showing the Archdiocese of Chicago paying for Obama to attend a seminar in California on Alinsky tactics and theory. Praise God, she even has the check stub with “THE CATHOLIC BISHOP OF CHICAGO” emblazoned across the top of the check. The images of that are at the link above.

Guess who the Cardinal Archbishop of Chicago was in ARSH 1986 who sent and paid for Obama to attend the conference on Alinsky tactics and theory – the same Alinsky who proudly dedicated his seminal manifesto, “Rules For Radicals” to Lucifer himself?

Here is the very short story on what likely happened with Bernardin. Bernardin was born Catholic in South Carolina in ARSH 1928. He had no remarkable zeal for the faith as a youngster, according to his own immediate family. Right after WWII, when the Communists really began their infiltration strategy of both the U.S. government, entertainment industry and education complex, and also the Catholic Church, Bernardin enrolled in the University of South Carolina pre-med program. All he had ever talked about as a kid was being a doctor.

Bernardin was homosexual, and likely entered into the gay underground scene in Columbia. There he was recruited by satanists. Remember, this is ARSH 1948. Satanists and Communists, who many times were BOTH, cultivated and trolled gay bars and the gay underground for recruits. Bernardin was promised power and as much deviant sex as he could ever want if he would enter seminary and be ordained a Catholic priest.

After his first year at USC, Bernardin went home and announced to his SHOCKED family that he was entering seminary. He was ordained in ARSH 1952 by Bishop John J. Russell, who was also fingered in depositions as the “celebrant” of satanic rituals. Russell may have repented, as he offered to testify against Bernardin in a lawsuit brought by one of Bernardin’s male seminarian rape victims, but conveniently died before he could testify in the early 1980s.

Bernardin was then speedily elevated up the ranks, being installed a bishop at the remarkably young age of 37. Shockingly, he was made the General Secretary of the Conference of Catholic Bishops (U.S.) in ARSH 1968 after being a bishop for only two years, and being only 40 years old. Guess what his job was? Implementing the Novus Ordo Mass, and we can now say with certainty, destroying the Tridentine Mass, and with it the Church itself.

Again, only a few years later in ARSH 1974, at the age of 46, Bernardin was elected the President of the Conference of Catholic Bishops (U.S., which is now called the USCCB). He held that post, either himself or through his hand-picked proxies, and pretty much controlled what went on in the U.S., most especially who was elevated to the office of bishop in the U.S. and who ran seminaries, until he died in ARSH 1996.

Bernardin, in addition to doing everything possible in an attempt to destroy the Holy Sacrifice of the Mass, railed against Pope Paul VI’s encyclical Humanae Vitae, which explicitly and prophetically condemned all birth control and abortion as objective evil, and laid out the consequences of a contraceptive, abortive culture: skyrocketing adultery, skyrocketing divorce, skyrocketing objectification of women, skyrocketing sodomite perversions, the destruction of the institution of marriage, the destruction of the family as the center of society, economic collapse, and finally total civilizational collapse. Sound familiar??? 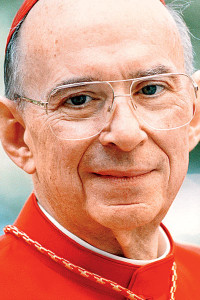 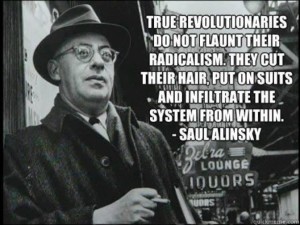 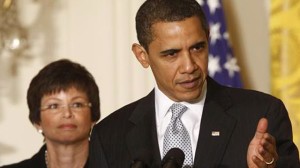 Bernardin’s satanic means of coercing Catholics to vote for his Marxist-Communist masters and allies was called the “Seamless Garment” argument. He told people that it was their duty to vote for pro-abort politicians (read Democrats) because the fact that they wanted to give free shit to people canceled out the fact that they also wanted to kill babies. Because, you know, we have to view life as one big seamless garment, and take the good with the bad, or something. If the image of the serpent beguiling Eve in the Garden hasn’t popped into your mind yet, now it has.

Since Bernardin was in charge of who got elevated and thus had control over the seminaries, orthodox, heterosexual Catholic men were either rejected or harassed/threatened into leaving. Bernardin would frequently make “visits” to seminaries all over the U.S. Whenever he would appear, he would ALWAYS have a young male with him, whom everyone knew was his concubine. Bernardin would then cruise the seminarians for sex, and got quite a bit, since the majority of seminarians were homosexual per his policy.

Bernardin was made the Archbishop of Chicago in ARSH 1982. In ARSH 1986, Bernardin sent Barack Obama to California to attend a training seminar on Alinsky theory, tactics, and “community organizing”, which we all know now is Marxist infiltration and agitation of the proletariat with the objective of crushing the middle class, collapsing the economy and government, and thus enabling a Marxist-Communist-Fascist hybrid revolution, the goal of which is the total destruction of the Church and global totalitarian tyrannical oligarchy.

As a Catholic, I am ELATED that this information about the Marxist-homosexualist infiltration of the Church is finally coming out. The pathetic strategy of ignoring the truth of the situation, pretending that nothing is wrong, and not saying anything unflattering about the bishops and clergy has not only not helped, it has made things monumentally worse, and has directly kept people out of the Church who otherwise would have found their way across the Tiber. Not to toot my own horn, but I was obviously given the grace to discern the difference between the PEOPLE inside the Church, and the Church itself, the Body and Bride of Christ. Most people look at the Church today and see either Marxist-homosexualists or COWARDS who refuse to acknowledge what has happened or take any proactive steps to fight the evil inside the Church.

A seminal moment for me personally happened in ARSH 2009. I was visiting with an orthodox priest about the Marxism in the Church, specifically amongst the bishops, and his response was, “We just have to wait for them to die. The attrition of time is all we can hope for.”

At that moment, I knew that given my personal situation and minor bully pulpit, it would probably fall to me, and a few other lay people, to do this. I’ll admit the thought was conceited on my part as I had literally only been in the Church for a little over two years at that point, BUT the fact that I have gone viral no less than THREE TIMES since that conversation I find … interesting.

This website, despite its many flaws, not the least of which is my use of foul language, is a vector by which the Holy Ghost is converting and reverting people to the Church. Why? Because when people have the truth of the situation explained to them, even though it is horrible, the TRUTH, which is Jesus Christ, is always, always attractive. Be honest and upfront with people and not only will they not hate you, they’ll join your army and will march into battle with you.

Lie, deny, prevaricate and cower and you will do nothing but REPEL people. Welcome to the New Evangelization.