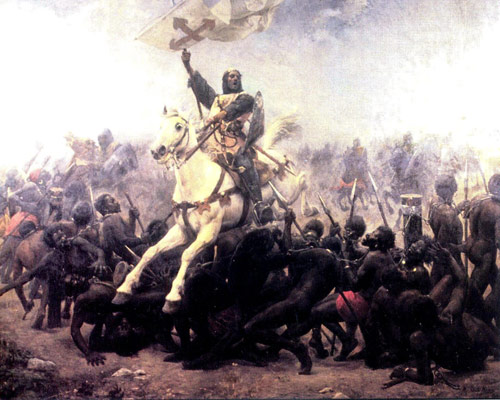 War is never the answer… except when it totally, totally is, and Apostles are appearing eight hundred years after their death and personally leading your massively outnumbered army into battle, and victory. But apparently, thanks to the “new pentecost”, we now know that St. James, dwelling INSIDE the Beatific Vision, missed the memo that war is never the answer, was mistaken, acted contrary to God’s Perfect Will, and committed grave, mortal sin eight hundred years after his death by waging war against the satanic enemies of God, His Holy Church and His people. Youbetcha. Makes perfect sense. And 2+2=864.

Here is Dom Gueranger’s beautiful and stirring commentary on today’s feast from his “Liturgical Year” set:

… And how did he justify his name of Son of Thunder, since his voice was heard by a mere handful of disciples in a desert of infidelity?

This new name, another special prerogative of the two brothers, was realized by John in his sublime writings… With regard to James, too, then, eternal Wisdom could not have been mistaken. Let it not be thought that the sword of any Herod could frustrate the designs of the most High upon the men of His choice. The life of the saints is never cut short; their death, ever precious, is still more so when in the cause of God it seems to come before the time. It is then that with double reason we may say their works follow them; God Himself being bound in honour, both for His own sake and for theirs, to see that nothing is wanting to their plenitude. As a victim of a holocaust, He hath received them, says the Holy Ghost, and in time there shall be respect had to them. The just shall shine, and shall run to and fro like sparks among the reeds. They shall judge nations, and rule over peoples; and their Lord shall reign for ever. How literally was this divine oracle to be fulfilled with regard to our saint!

Nearly eight centuries, which to the heavenly citizens are but as a day, had passed over that tomb in the north of Spain, where two disciples had secretly laid the apostle’s body. During that time the land of his inheritance, which he had so rapidly traversed, had been overrun first by Roman idolaters, then by Arian barbarians, and when the day of hope seemed about to dawn, a deeper night was ushered in by the Crescent. One day lights were seen glimmering over the briars that covered the monument; attention was drawn to the spot, which henceforth went by the name of the field of stars. But what are those sudden shouts coming down from the mountains, and echoing through the valleys? Who is this unknown chief rallying against an immense army the little worn-out troop whose heroic valour could not yesterday save it from defeat? Swift as lightning, and bearing in one hand a white standard with a red cross, he rushes with drawn sword upon the panic-stricken foe, and dyes the feet of his charger in the blood of 70,000 slain. Hail to the chief of the holy war, of which this Liturgical Year has so often made mention! St. James! St. James! Forward, Spain! It is the reappearance of the Galilean fisherman, whom the Man-God once called from the bark where he was mending his nets; of the elder son of thunder, now free to hurl the thunderbolt upon these new Samaritans, who pretend to honour the unity of God by making Christ no more than a prophet. Henceforth James shall be to Christian Spain the firebrand which the prophet saw, devouring all the people round about, to the right hand and to the left, until Jerusalem shall be inhabited again in her own place in Jerusalem.

I was also struck by the Offertory of today’s Mass, Psalm 18: 5

Their sound went forth into all the earth; and their words to the ends of the world.

Psalm 18: 5 is now a literal truth and yet WE are the ones who refuse to proselytize, who now openly state that conversion of our fellow human beings to Christ’s One, Holy, Catholic and Apostolic Church is neither desired nor necessary.  Why?  Well, the answer is found in the Epistle of today’s Mass from 1 Corinthians 4: 9-15

For I think that God hath set forth us apostles, the last, as it were men appointed to death: we are made a spectacle to the world, and to angels, and to men.

Because one can’t possibly be expected to do ANYTHING that might cause the world to think poorly of us, much less hate us, right?  And then in verse 15, St. Paul sums it all up:

For if you have ten thousand instructors in Christ, yet not many fathers.

St. James the Moorslayer, Son of Thunder, pray for us.