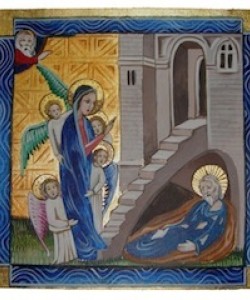 Saint Alexius, in his cubbyhole under his parents’ stairs.

Meet St. Alexius, who was born very rich, the son of the Roman Senator Euphemian.  When his parents tried to push him into a loveless arranged marriage, he instead renounced his position and wealth and took off on a pilgrimage to the Holy Land, disguised as a beggar.  He became famous in the Holy Land when the Blessed Virgin appeared and declared him a “Man of God”.  Shunning the resulting notoriety, he returned to Rome.  Upon returning home to Rome, his parents did not recognize him, but they took him in as an indigent holy man and he slept under the stairs, unrecognized by all, for seventeen years, living a life of prayer and teaching the faith to others, and begging for alms, almost all of which he gave to others.  After his death in ARSH 404, his parents found his writings and realized who he was.

Saint Alexius, pray for us!

The epistle of today’s Mass for St. Alexius:

But godliness with contentment is great gain. For we brought nothing into this world: and certainly we can carry nothing out.  But having food, and wherewith to be covered, with these we are content.  For they that will become rich, fall into temptation, and into the snare of the devil, and into many unprofitable and hurtful desires, which drown men into destruction and perdition.  For the desire of money is the root of all evils; which some coveting have erred from the faith, and have entangled themselves in many sorrows.

But thou, O man of God, fly these things: and pursue justice, godliness, faith, charity, patience, mildness.  Fight the good fight of faith: lay hold on eternal life.
I Timothy 6: 6-12