Here’s your history lesson of the day, and it’s a duzy. Do you all remember the department store chain Montgomery Ward? It was in the same class as JC Penney and Sears, and like Penney’s and Sears had a robust catalog business in the 20th century. The catalog ended in 1985 and the stores closed in 2000. The incident we are going to talk about happened during World War 2, in 1944. When I read this it initially put my jaw on the floor, but when I thought about it for a moment, I realized that it put all of the pieces together regarding Marxist tactics and motivations.

In early 1943 employees of Montgomery Ward went on strike in seven cities: Jamaica, New York; Detroit; Chicago; St. Paul; Denver; San Rafael, California and Portland, Oregon. (For the sake of brevity, I will henceforth refer to Montgomery Ward as “Wards”, which is what people casually referred to them as back in the day.) Wards stood their ground and refused to recognize or capitulate to the union thugs in these seven locations.

Now get this. On April 26, 1944, President Franklin D. Roosevelt ordered U.S. Army troops to storm and seize Wards’ corporate offices in Chicago. Yes, you read that correctly. FDR deployed the Army against Americans on American soil, physically captured occupied their property and even had Wards’ chairman, Sewell Avery, forcibly carried out of his office by US Army troops. FDR then installed his Secretary of Commerce, Jesse Holman Jones, as manager of Wards’ Chicago facility. FDR justified this action by citing his power as Commander-in-Chief AND his authority under the Smith-Connally Act. 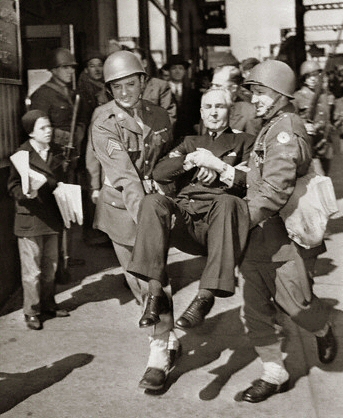 The Smith-Connally Act, which was also called the War Labor Disputes Act, was passed in June of 1943. It was hastily rammed through congress, touted as an “emergency measure” (sound familiar?) after 400,000 coal miners went on strike. Why did the miners go on strike? They went on strike because of the high inflation that was being experienced at the time. (Sound familiar?) They wanted a $2 per day wage increase in order to pace the inflation. Interestingly, FDR vetoed the Smith-Connally Act but Congress had a super-majority and overrode FDR’s veto. This threw me for a moment when I first read it, but let me explain. The Smith-Connally Act gave FDR massive dictatorial power. So why did he veto it? Optics. FDR knew that he had a super-majority in Congress, so in order to appear like the innocent, blushing maiden, rather than the Marxist dictatorial wolf that he was, he vetoed it. Congress promptly overrode the veto and FDR was then free to wield the power which was handed to him by Congress and which he falsely claimed to protest. In other words, “Hey, you INSISTED on giving me this power. Now you can’t complain when I use it.”

Back to Wards. In the summer of 1944 the National Labor Relations Board (Sound familiar? Boeing? South Carolina? 2011?) tried to organize a Wards union again, but Wards STILL stood its ground. As a result, FDR issued an executive order (sound familiar?) ordering the Secretary of War (which is now called the Secretary of Defense) to seize ALL Wards property nationwide in order to force Wards to capitulate to the unions. This seizure was upheld by the Court of Appeals. No joke. I’ll tell you how the story ended in a minute.

I have one more anecdote about the tyrannical use of the Smith-Connally Act by FDR. This one is complex because there were wrongs on both sides, and it actually involved FDR turning against the unions, but we’ll think our way through it. In 1944 the Philadelphia Transport Workers Union went on strike because Philadelphia Transportation Company decided to integrate the skilled positions on trains and trolleys, namely motormen and conductors by promoting and training black porters and other existing employees in menial positions, but who were already experienced with the trains of trolleys. This integration was spurred not by altruism and a spirit of Christian brotherhood, but because there was a shortage of labor due to the war. Because of this, the whites-only union went on strike. Yes, everyone’s motives were sleazy. But, I want you to focus on what FDR did, because the issue in question is the lawless tyranny of the state. The true racism of the unions is a given. We don’t need to re-invent that wheel.

FDR ordered his then-Secretary of War (again) Harry L. Stimson to seize the Philadelphia Transportation Company and installed US Army Major General Philip Hayes as CEO. That’s right. FDR forcibly seized and handed a private company to the United States military by executive fiat. When the union didn’t agree to Gen. Hayes’ terms, Hayes deployed 5000 troops to seize and run the PTC trains, with armed soldiers riding the trains as “security”. Oh, but it gets even worse! On August 5, 1944, Gen. Hayes issued an order that unless the unions returned to work by 12:01 am on August 7th, they would be fired and all between the ages of 18 and 37 would lose their military draft deferments. Yep. He threatened to draft them, which during World War 2 carried a very high risk of being killed.

FDR was one of the most dangerous men in American history up until Obama. If FDR had been ten years younger than he was and had lived, I honestly think that he could have become a full-blown dictator. FDR died in April of 1945 after having just been sworn in to his FOURTH term as President. Harry Truman then became president and after the conclusion of the War appointed the Hoover Commission which promptly recommended the 22nd Amendment to the Constitution which limited Presidents to two terms. Truman knew that we had dodged a bullet with Roosevelt and made certain that a tyrannical dynasty like FDR’s would never happen again. With regards to Montgomery Ward, Truman terminated the government seizure of Wards almost immediately after being sworn in as President in 1945. Remember, Truman was a Democrat whom FDR picked to be his Vice President knowing that he probably wouldn’t survive his fourth term. Can you imagine Joe Biden being elevated to the Presidency (in whatever circumstance) and then immediately repealing ObamaCare and calling a commission on eligibility requirements resulting in a Constitutional amendment? Of course not. Why? Because Joe Biden has no personal integrity. None of them today do. None of them.  They are, ALL OF THEM, whores and psychopaths. But Truman had a shred of integrity and reversed Roosevelt’s imperious tyranny. That was a different time, a different culture, and literally, a different country. The U.S. was able to shake off Roosevelt’s brand of Marxism and get back on track because the halls of government were still walked by men with a backstop of integrity and morality. That backstop no longer exists, which is why we are screwed.

For those in the upper middle class who don’t fall for the self-loathing Marxist agitprop, persecution and death comes early in the Marxist revolution process. The self-loathers are the second group to be eliminated. Academics, clergy, artists, business owners and politicians outside the elite cadre, even though they supported the Marxist elites, are killed early in the purging process. Why? Because the Marxist elites know that once these people figure out that all of their “social justice” talk is complete bee-ess, these people COULD turn on them and expose their fraud to the lower-middle class, or “proletariat”. So, the Marxist elites eliminate that risk. For the love of God, PLEASE read the history of the Soviet Union. Lenin and Stalin eventually killed damn near EVERYONE who ascended through the Communist Party. They had to keep continually elevating and then murdering people in order to maintain their decadent lifestyle and fraud without being ratted out to the suffering proletariat who would certainly revolt against the Marxist elites if they knew the truth.

The proletariat, or lower-middle class, is a bit different. In the beginning of the revolution process the Marxist elites rely heavily on the lower-middle class, blue collar workers. They agitate and organize workers and form unions. Josef Stalin was a union organizer. They do this by stirring up class envy between the lower middle class and the upper middle class. (Sound familiar?) Every business owner is cast as a “greedy fat cat”. “Equality” and “fairness” are the buzzterms used to incite the workers against their employers. The Marxist elites promise the proletariat “equality and fairness” if they will only give them power and loyalty and support the Marxist revolution. But it is all a lie. The Marxist elites don’t give a crap about the proletariat – in fact, they DESPISE them. They view them as expendable animals whose only purpose is to deliver the Marxist elites to power. Once the revolution is complete, the proletariat – now fully integrated into the destitute lower class – no longer serves a purpose. Not only do they not serve a purpose, but they are a massive drain on the Marxist oligarchy’s government. They eat and get sick and use resources. They also get disgruntled when they realize that the elitists used them, promised them the moon, and then delivered poverty, starvation and disease. In order to maintain power, Marxists have to squash the proletariat under the jackboot of a police state driven by violence and terror.

And so, in FDR’s tyrannical actions from 1943-1945 we see a microcosm of the agitation-suppression cycle of the union-elitist relationship. The Marxists start out all kissy-kissy with the unions, but then transition to threats and brutality as soon as they have accumulated power. This is why Marxists began their infiltration of our culture 50 years ago in the SCHOOLS. It is critically important that both the lower middle class and the upper middle class today have NO KNOWLEDGE of history and thus cannot recognize what is happening, and more importantly how it is going to end. These pathetic union members honestly believe that Barack and Michelle Obama, who take multi-million-dollar vacations on a near-monthly basis, actually care about them when the truth is that they despise them and laugh at their gullibility. And none of them have the foggiest idea who Vladimir Lenin, Josef Stalin, Mao Zedong or Pol Pot were, much less that these four men alone consciously murdered well over one hundred million (100,000,000) of their own people in roughly 60 years.

Layer on top of this the fact that the Union oligarchs have stolen wages and looted “retirement and pension” accounts for into the TRILLIONS of dollars – accounts that simply WILL NOT pay out because the money IS NOT THERE – a dynamic which did not exist 70 years ago, and you see that while there is nothing new under the sun, this is indeed a whole ‘nother level of evil.