Lots of solid and fascinating info in the piece linked below, and it utterly debunks all of the tinfoil hat nonsense, especially with regards to the runway requirements of a 777.  You can’t just land a plane like that anywhere.

Bottom line, pilot and co-pilot cold-jacked the plane, flew it out over the open ocean, demanded their imprisoned Malaysian political cult leader be released and when he wasn’t, they nosedived the thing into the ocean at 550mph whereupon it all but atomized (kinetic energy, non-compressability of water, laws of physics, etc.)  Hence the shiftyness from the Malay government.  The deployment of the USS Kidd is the most persuasive piece of data, though.  I’m with the author – the subs heard the impact.  Subs can hear whalefarts.

But, of course, tales of shape-shifting lizard-Joooz deploying their lizard-Jooo holographically cloaked antigravity shuttlecraft and their newly-developed micro-blackhole (or is that WORMHOLE?) magic disappearing weapon will no doubt live on and on and on.

But then, it’s just the mind-control chemicals from the jet contrails MAKING ME SAY THAT.

Clearly I need to start spraying my water-vinegar solution into the sky again.  You know, to form the magic force field to protect me from the mind control chemicals.

At the 1:30 mark, this poor, poor man, who is psychiatrically ill, shows his “chemtrail busting system” and after an hour triumphantly declares that the contrails (yes, CONTRAILS, not “chemtrails”, because CONTRAILS are what ARE and always HAVE BEEN produced by atmospheric moisture condensing around jet engine exhaust) are gone.  Because his fans on his back terrace did that – not, oh, I dunno, dissipation of the condensation of atmospheric moisture around the particulate exhaust from the jet engines FIVE MILES overhead over the course of an hour.  No.  This man actually believes that his FANS on his TERRACE dissipated a cloud formation through multiple cubic miles of atmosphere.

I post this video just because it is so quietly and thoroughly horrifying.  These people – utterly disconnected from reality – are a non-trival percent of the populace, and it seems that an ever-growing percent of the populace is so stupid, gullible, or mentally ill that this stuff just gets more and more traction.  And we wonder why there isn’t any grass-roots level inertia to turn civilization around.  We wonder why people continue to fall for the same old crap.  I cannot believe that 50 years ago these manifestations of mental illness would have garnered any attention other than pity, because people could think in linear logical progressions and had a fairly decent baseline understanding of science.  Today this stuff feeds a massive closet industry.

The only thing I can figure is the pathological refusal to accept responsibility for anything – even collective responsibility – is what is driving this.  America is going to hell, it is said by these nuts, not because its people have degenerated through their own personal moral and intellectual sloth, but, the nuts say, because the shape-shifting Lizard-Jooos are, are, um, wait… spraying us with mind-control chemicals!  Yeah!  That’s the ticket! It isn’t MY fault!  I dinnit do it!  My son is an illiterate moron and my daughter is a conscienceless slutbag NOT because I happily sent them off to public schools (and let’s face it – private too) where the commies had free reign over them, and then parked them in front of the TV at home and thus utterly failed them as their parent.  No!  It’s the mind control chemicals from the Lizard-Jooos!  WHERE’S MY OSCILLATING FAN???!!!???!!!  We gotta do sumpin’ ’bout dat shit!

Meanwhile, those of us jumping up and down screaming about the financial bubble and the cold coup and overthrow of the former American republic get lumped in with the guy who has two fans blowing on vinegar-soaked dishtowels on his back patio.  And you just think to yourself, watdahell?  Say goodnight, Gracie. 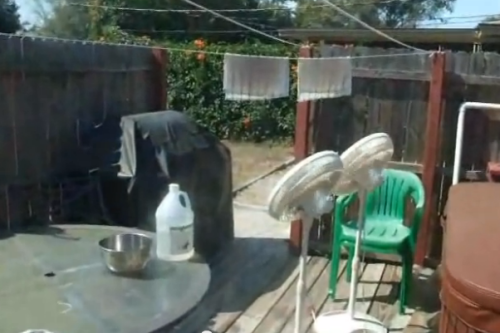 They walk among us.