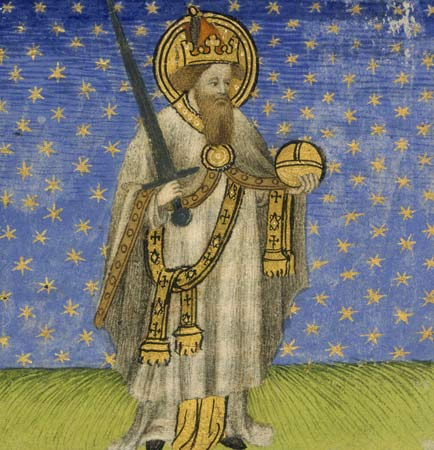 We’re gonna go “encounter” some musloids and then we’re gonna “dialogue” using swords just like this one I’m holding right here in my right hand, because I’m the Vicar of Jesus Christ and I have made my judgment.

Meet Pope Urban II.  In the late 11th century, the musloids were exterminating all of the Christians in the Middle East.  (Sound familiar?)  Even though he was over in the West with the Western Rite, and the exterminated Christians were Eastern with their Eastern Rites, it mattered not, because there is only One Church, and when the sheep are being exterminated by a large pack of inbred, rabid, demonically possessed wolves, you suit up and boot up.  Quoth Pope Urban II to those assembled at the Council of Clermont on November 27, ARSH 1095:

I, or rather the Lord, beseech you as Christ’s heralds to publish this everywhere and to pers­e all people of whatever rank, foot-soldiers and knights, poor and rich, to carry aid promptly to those Christians and to destroy that vile race from the lands of our friends. I say this to those who are present, it is meant also for those who are absent. Moreover, Christ commands it.

To which, all there present simultaneously cried, “Deus vult!  Deus vult!”  (God wills it!)

Now, 918 years later, the successor to Urban II can only spew incoherent platitudes while his sheep, his flock, entrusted to him by Jesus Christ, are exterminated without compunction in exactly the same lands and by exactly the same people (no, really, the family trees are completely straight lines).