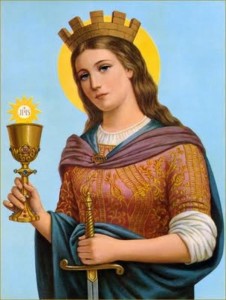 Meet St. Barbara.  The Eucharist in one hand, an assault weapon in the other.  Sigh.  She is the patron saint of artillerymen, military engineers, gunsmiths and anyone who works with explosives.  Her father beheaded her himself because she converted to Christianity and refused to marry any of the pagan dorks her father tried to marry her off to – hence the sword.  There is something so choice about being able to wave the instrument of one’s execution back in the face the the world.  If I get to be martyred, and I make it to heaven, and anyone cares, I hope mine is something good, like a tank.  Or a super-longrange sniper rifle.

Wow.  I’m being vain about my instrument of execution, and am only half joking.  Sigh.