I just want to make sure that you understand the real dynamics here. I think a lot of people are looking at all of this and not getting terribly upset because they tell themselves, “I have nothing to hide. My books are pristine. The IRS (or whoever) isn’t going to find anything if they audit me.”

Yeah, I used to think that way too. Back when I was young and naive and stupid and hadn’t yet realized that the rule of law was dead, and that we were living under a totalitarian oligarchy of psychopaths.

Guys, the IRS knows that you all are square on your taxes. That isn’t the point. Heck, when they audited me for 18 months from 2011-2012, the results showed that I had OVERPAID (but sorry, the amendment window is closed – too bad for you, Ann.)

The point is putting a business owner, non-profit, or even an individual or couple through an audit in order to PUNISH THEM WITH MASSIVE ACCOUNTANT AND ATTORNEYS FEES.

When your CPAs and attorneys bill at $250 per hour per man, the IRS or some other agency or corrupt regulatory body knows that it can destroy you simply by incurring the massive expense of an audit on you.

THAT is the point of this stuff. For a small business owner who is operating on a thin margin to begin with, an audit can EASILY wipe out in excess of an entire year’s profits JUST ON THE BILLING HOURS from the CPAs and lawyers. The same goes for a start-up non-profit.

That is textbook mob-style intimidation.

In fact, I think a more apt term would be SOVIET.

My advice? If they come after you DO NOT involve your CPA or lawyers. That’s exactly what they are counting on you to do. Like all totalitarian regimes, they want you to dig your own grave before they murder you. Man up and refuse. Stand and face them. 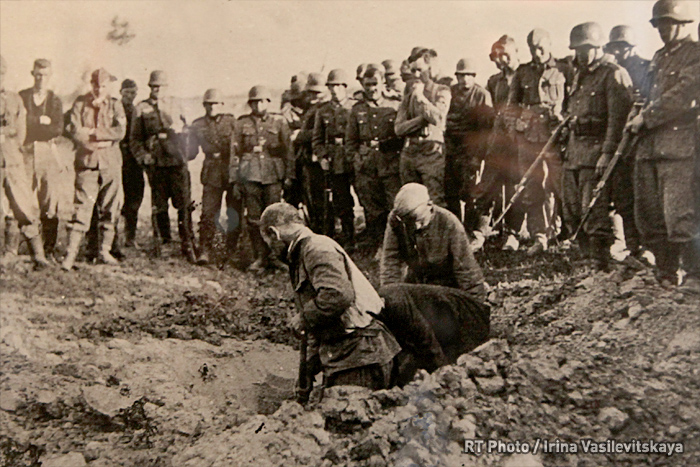 POWs being forced by the Nazis to dig their own graves, circa 1941.