Q: I want to know little bit more about what you think is wrong with today’s Mass when it involves really fun music. You wrote, “the same goes for the neo-con Catholics, which is to say Catholics who call themselves conservative, but just LURV the superfun rockband uber-effeminate Novus Ordo Mass and culture.” If there is a problem there within the modern Mass that causes us to worship in an incorrect way, I’d like to explore it. Those rock band Masses are more popular near colleges, and I want my child to always attend the worship ceremony and the celebration of the Eucharist without ever drifting away from the practicing faith. If you can pass along an explanation of your opinion on that matter, or a reading link, I would appreciate it. Here, I always thought that merely being a practicing Catholic meant being totally orthodox and conservative enough for any Tea Partier.

A: First, the “Tea Party” has nothing to do with it.

The Mass, which we all need to start referring to properly as “The Holy Sacrifice of the Mass” in order to help us remember, is truly, literally CALVARY. God manipulates time such that the singular event of Calvary, which is now just over 1980 years ago on the linear timeline, is made to intersect and touch today at every Mass. Imagine you are holding a piece of string or a shoelace. The shoelace is TIME. Since the singular event of the Passion, Death and Resurrection of Our Lord is the “center” of time, meaning that all events both before and after will be reconciled to it, let’s say that the midpoint of the shoelace is the singular event of Calvary in AD 33. Pinch your left fingers on that spot on the shoelace and hold it. Now, with your right hand, pinch the shoelace somewhere several inches to the right of Calvary. Let’s call that point today, June 3, AD 2013. If you go to Mass today, the June 3, AD 2013 point on the timeline will be looped back over the altar at the Consecration of the Host and Chalice such that the two points in time touch each other. You can do this with your shoelace. Take your right hand, still grasping the 6/3/2013 spot and make a loop back to the left. Then, pinch BOTH the Calvary spot and the 6/3/2013 point in your left hand so that they are touching each other.

Fascinating aside. Albert Einstein, whenever he would see a Catholic priest, would stop him and ask the priest questions about the Eucharist. Do you see why? Because Einstein, atheist though he was, knew that time was not linear, and had an inkling that the non-linear nature of time was somehow a dynamic in the Mass and the Eucharist.

We see biblical confirmation of this in John 12:32 :

And I, if I be lifted up from the earth, will draw all things to Myself.

And that is EXACTLY what He does. He draws all things to Himself through TIME. Every day, every action of every person is now drawn through time and reconciled to Calvary. Go back to your shoelace. Pull the right end of the lace so that the loop is smaller. That’s yesterday. Now pull the loop out so that it is bigger. That’s tomorrow. We don’t have to wait until the end of time to reconcile ourselves to Christ Crucified. In His infinite mercy, He established the Mass so that we could be physically present at Calvary at minimum once per week (per the Third Commandment) or as often as daily.

Which brings us back to the question. The Holy Sacrifice of the Mass is CALVARY, PHYSICALLY PRESENT. Jesus Christ hangs before us, scourged until He is essentially skinned, in shock from massive blood and fluid loss, and NAILED TO A CROSS, asphyxiating, naked, and all of this is happening in order to make it possible for YOU, PERSONALLY, to be redeemed and saved. Your Father, your Brother, your Divine Spouse, your Creator, your Savior and your Best Friend is DYING right in front of you IN YOUR STEAD because He loves you.

Tell Him you love Him.

And just answering the inevitable question in advance: the reason you have never heard this before from Fr. Marxist-Jazzhands is because Fr. Marxist-Jazzhands either knows NOTHING about the true reality of the Holy Sacrifice of the Mass, or if he has heard about it, doesn’t believe it. The Church has been infiltrated over the last century and the resulting rot, ladies and gentlemen, is DEEP. 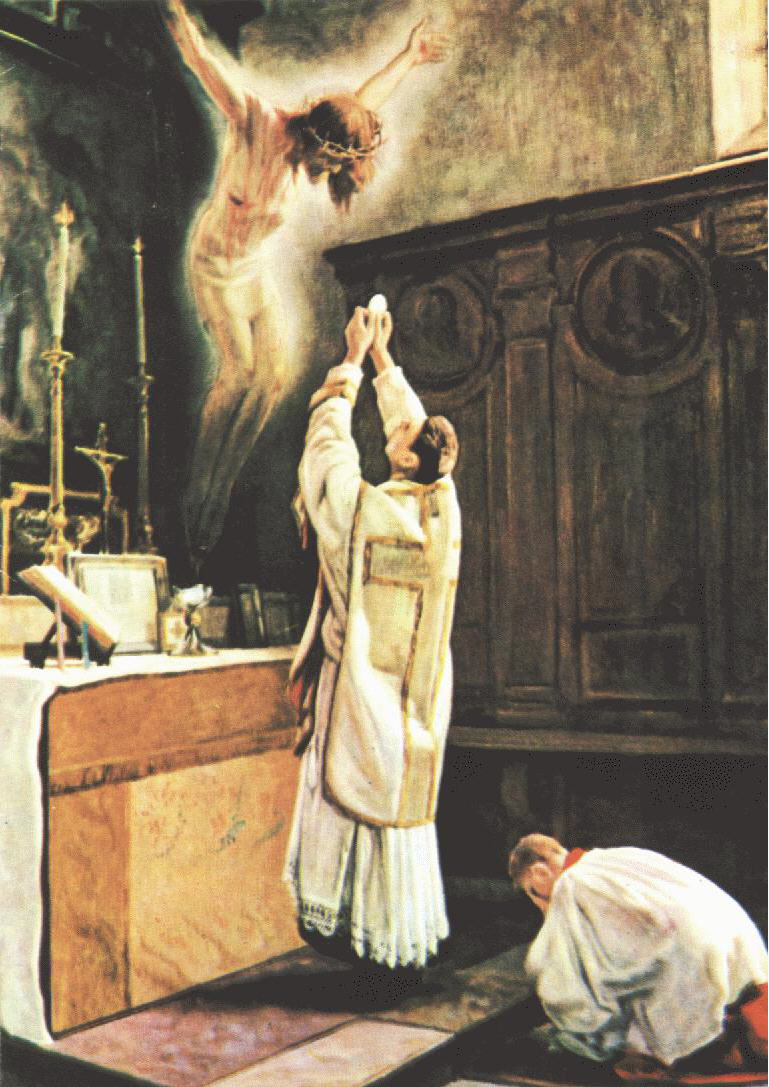