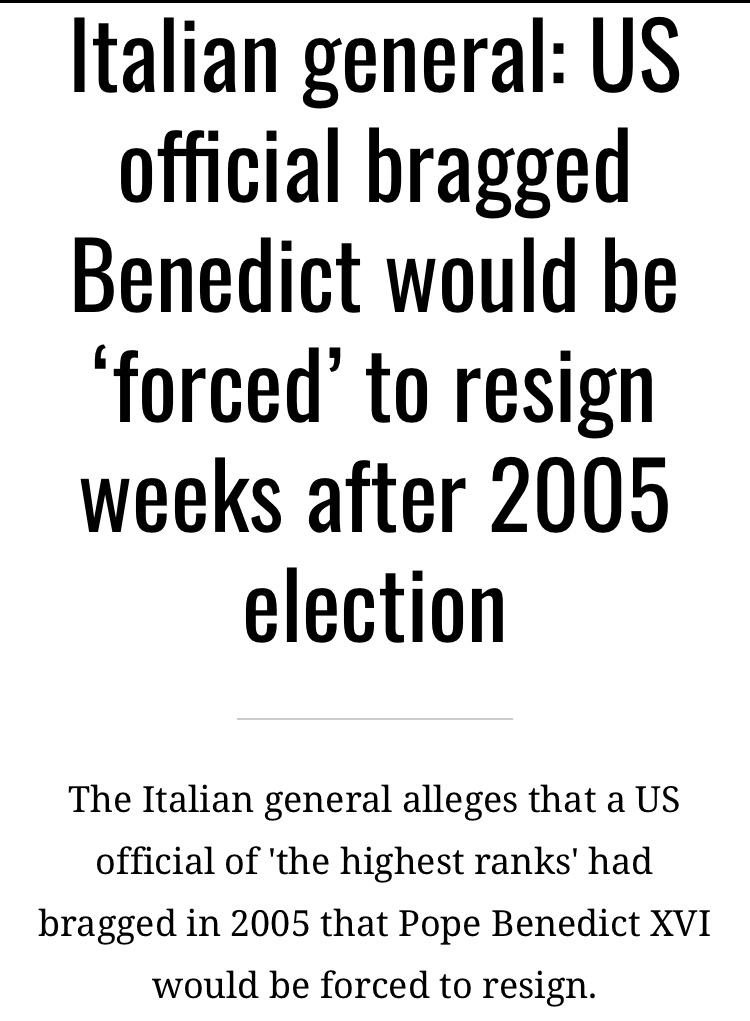 “Pray for me, that I may not flee for fear of the wolves.”

MASS, IMPOSITION OF THE PALLIUM
AND CONFERRAL OF THE FISHERMAN’S RING
FOR THE BEGINNING OF THE PETRINE MINISTRY
OF THE BISHOP OF ROME

HOMILY OF HIS HOLINESS BENEDICT XVI

A resignation made out of grave fear that is inflicted unjustly or out of malice, substantial error, or simony is invalid by the law itself.
-Canon 188

Canon 188: A resignation made out of grave fear that is inflicted unjustly or out of malice, substantial error, or simony is invalid by the law itself.

Simony: To accept a bribe or payoff in exchange for attempting to resign the Papacy would be not merely the coveting of money, but is even moreso a sin of IRRELIGION, a sin against the FIRST COMMANDMENT itself because it is the buying and selling of a spiritual thing, namely, in this case, the exercise of an ecclesiastical jurisdiction – the Papacy itself.

Do you honestly believe that the Pope has the ability to ABROGATE THE TEN COMMANDMENTS and/or THE NATURAL LAW?

If the Law is derivative of GOD HIMSELF, being perfect good, truth and justice, and Jesus Christ EXPLICITLY bound Himself to the Law when He gave Peter the Keys, saying:

Does it make any sense whatsoever that the Pope can override the very ESSENCE of God Himself, namely truth, goodness, justice and RATIONALITY? That the Pope can do that which even God Himself cannot and would not do given that God is pure goodness, truth, love and justice?

If so, then what EXACTLY is the stable base upon which EVERYTHING exists?  How can Peter be The Rock if Peter is NOT anchored to The Divine and Natural Laws, which is to say to Christ Himself?  If you take away the Earth (God Himself, the Rational Logos) what, exactly is the Rock (Peter) going to sit upon that The Church is then subsequently built upon?  If the Divine Law is mutable and overridable, and even the Natural Law can be casually tossed aside (any positive integer greater than 1 can equal 1 if it suits the Pope’s error), then how can God be rational?  Is the first verse of St. John’s Gospel, proclaimed at the conclusion of almost every Tridentine Mass, in error?  Is Christ NOT the Word, the LOGOS??

Like I said, this all sounds very, very suspiciously like the islamic political system and its irrational, pure will tyrannical satanic fake deity crap.  Red flag much??  Maybe worth a rethink?

The Pope is absolutely bound by Canon Law insomuch as a given point of Canon Law is simply a derivative recapitulation of Divine or Natural Law, which Canon 188 is in every particular.

To argue otherwise (if you can even call it that) is madness, and of the Enemy.

The fact that Pope Benedict has been dead for eight days, or ANY amount of elapsed time, makes absolutely no difference with regards to the importance of publicly acknowledging the situation. TRUTH HAS NO EXPIRATION DATE.

The statement that could end the Bergoglian Antipapacy has not changed a single iota with the death of Pope Benedict, because his earthly presence is not required to adjudicate the validity of the juridical act of the putative resignation that he proffered in February ARSH 2013. Only his words and deeds in February ARSH 2013 are legally germane, and we have a thorough record of that. So, we keep up the good fight to have the TRUTH publicly acknowledged. Let it ALL come out.

“Significant Canonical irregularities have been identified with regards to the putative resignation proffered by Pope Benedict XVI in February of 2013. Pending further investigation, a state of emergency suspense is hereby declared.”

Love therefore is the fulfilling of the Law.