As I keep trying to drive home, the Church is a Supernatural institution, created by God as His Bride, and Mystical Body, of which He is the Head.  And God, being God, is a really, really, really good organizer and “Human Resources manager”.  Being omniscient tends to yield… COMPETENCE.

The Divine Providence – always perfect, by the way – has given us the 1983 Code of Canon Law.  That is the Law of the Church.  To think that the Divine Providence would put us, the Church Militant, into this situation with the Bergoglian Antipapacy – a JURIDICAL situation – without any sort of Rule of Law, or even a Rule of Law that didn’t provide clear, visible protections of the Petrine See is madness, and flirting with blasphemy.  Why?  Because it would directly imply an INCOMPETENCE on God’s part, a failure of the Divine Providence.  Argue this at your own peril.

So, given this, let’s look at Canon 359, which very clearly addresses the juridical competence of the College of Cardinals, a body which Trad Inc. “thought leaders” simultaneously declare INFALLIBLE on a DOGMATIC LEVEL, any questioning of which is an act of SCHISM, and then literally in the next breath declare the same men to be subscribers to “a different religion”, and “not the Church” (because remember, ALL Cardinals are Novus Ordo). Yes, the cognitive dissonance is absolutely staggering, and is simply a proof set that “diabolical disorientation” is real, and what it looks like. Daily Mass and Rosary (while in a state of grace, obviously) is the first line of defense against diabolical disorientation.  This is why I recommend it so VERY strenuously in these dark days of confusion.

Folks, the very first clause is the punchline in this situation: WHEN THE APOSTOLIC SEE IS VACANT.

What this Canon does is 100% prohibit and utterly nullify ANY conclave convened while the Petrine See is STILL OCCUPIED, that is, NOT VACANT – no matter what the circumstance, including totally unprecedented circumstances, such as this current situation of Pope Benedict XVI Ratzinger trying to partially resign only the administrative/governance ministerio, and “expand” the Petrine Office into a “collegial, synodal, shared ministry”.

WHAT WE ARE LIVING THROUGH RIGHT NOW HAS NEVER HAPPENED BEFORE. NOTHING EVEN CLOSE. WHINING LIKE A LITTLE GIRL BECAUSE THERE ARE NO IKEA INSTRUCTIONS FOR THIS AND WE THEREFORE HAVE TO USE OUR OWN FACULTIES OF RATIONAL DISCERNMENT ILLUMINATED BY FAITH AND THE GIFTS OF THE SACRAMENT OF CONFIRMATION IS AS CLEAR A MANIFESTATION OF THE VICES OF EFFEMINACY AND SLOTH AS CAN BE IMAGINED. I can think of no clearer and more severe historical example of the near-total dearth of masculinity in a human population, ever. No human society is history has ever been this emmasculated.

If the See is occupied, for whatever reason and under whatever circumstance – IF THERE IS A LIVING POPE, OCCUPYING THE SEE, WHETHER HE LIKES IT OR NOT – it is completely, totally, 100% impossible for a valid conclave to be convened.  This isn’t an instance of “illicit yet valid” – as we see from Canon 359 above.  It is ONTOLOGICALLY IMPOSSIBLE for a valid conclave to be called, much less a valid Pope coming out of such an invalid conclave.  PERIOD.  This is absolutely essential in order to protect the Papacy.  To think that God couldn’t foresee this and specifically, explicitly provide for it in these dark days is madness.

Why?  Because God isn’t an idiot, and is, in fact, a really, really good “Human Resources manager”. And loves us.  Don’t ever, ever forget that.  He loves us, and would NEVER break his promise to us, His Church. That Antipope Bergoglio is proof that God has reneged on His promise to Peter and Peter’s successors is now taken for GRANTED by most “Trad Inc.” partisans (many of whom are now coming out publicly as either atheists or open schismatics in the true sense of the word.)

WITHDRAW the ONTOLOGICAL REALITY of the PAPACY from a VALIDLY SEATED (and in this case, STILL VALIDLY SEATED due to the proffering of a Substantially Erroneous attempted “partial” resignation of the ACTIVE, ADMINISTRATIVE MINISTERIO, BUT NOT THE OFFICE IN SE) Pope, and then bestow the Papacy upon another man, all because the College of Cardinals said so?  Law be damned?  Common sense be damned?  Order be damned?  The Papacy be damned? THE CHURCH HERSELF BE DAMNED??

[begin sarcasm] So all this time, the Vicar of Jesus Christ on Earth COULD have been deposed if the College of Cardinals got together and decided to simply call a conclave.  So, what this means is that the Papacy, all this time, has been subject to a VOTE OF NO CONFIDENCE, and that hence forth, we should expect that the Pope will serve AT THE PLEASURE OF THE COLLEGE OF CARDINALS, and the truth is, it has been this way all along, it’s just that the entire Church Militant, every saint, and every doctor of the Church for the past 2000 years has completely misunderstood the Papacy, and only NOW, only NOW in this age of moral depravity, social media addiction, and a near-total collapse of anything that could honestly be called “Academia” in the Church, only NOW is all of this being figured out BY ATHEISTS AND LITERAL SCHISMATICS.   [end sarcasm]

[begin sarcasm] Every instance of the “Tu Es Petrus” being prayed for these 2000 years has been a hideous manifestation of the stupidity and ridiculous and MORTALLY SINFUL papolatry of the Church Militant.  Youbetcha.

Latinists?  We need a translation.  Instead of “Tu es Petrus….” we need the Latin for:

“You are the College of Cardinals, and upon this slag heap I will build My Church.”

Because Jesus clearly got it wrong, and the Holy Ghost clearly erred in recoding Our Blessed Lord’s mistake in the Gospels.

Funny, though, how the play on words goes away.  Huh.  Funny that.  It’s almost enough to make one think that the whole changing of Simon Bar-Jona’s name to ROCK, like, meant something profound.  Ah, what infantile stupidity!  Thank God that “Pope Fwaanciss” has liberated us from such childish notions!  Now, finally, the Church can move forward, acknowledging the supremacy of the College of Cardinals as the REAL power, and the Papacy can finally, at long last, be understood as the meaningless figurehead position that it always has been. [end sarcasm]

Folks, WELCOME TO FREEMASONRY.  Whether you enter the Lodge through the front door, or the back door in the alley, you’re still in the Lodge.

Pro tip: if your position is irrational and lines up EXACTLY with the clearly stated goals of freemasonry, and of satan himself, you MIGHT want to check your base premise.

And remember, this is of the utmost importance because IF Bergoglio somehow “goes away” while Pope Benedict XVI is still alive and occupying the See as he is today, and another “conclave” is called, that conclave WILL ALSO BE INVALID, and it will yield ANOTHER Antipope.

Folks, we HAVE TO GET THIS RIGHT.  Half-measures and half-truth simply doesn’t work.  Either this situation gets fixed at the root, or else it will only get worse.  The chaos of the false base premise will continue and grow, and then we will end up with an Antipope Zuppi or Antipope Tagle, 20 years younger than Antipope Bergoglio. This is why the whole “Bergoglio is a heretic” tack, and likewise the “electioneering” of the ARSH 2013 faux-conclave are rabbit holes that both lead to hell, even though the folks pursuing them are really good people.  Bergoglio never has been the Pope and thus his obvious status as an arch-heretic is NOT LEGALLY GERMANE, because there WAS NO CONCLAVE in March of ARSH 2013.  We HAVE to get this right.

And GO TO MASS, and consider asking Our Lord to give YOU, in imitation of Our Lord in the Garden, scourged at the Pillar, and being nailed to the Cross, any temporal punishment that might be due to a priest who erroneously or under fearful coercion commemorates the wrong man at the Te Igitur.  “Give it to me.” NOTHING enflames fraternal charity quite so quickly as volunteering to take on temporal punishment for another, most especially for priests and bishops, who, God knows, need all the support in this sense that we can give them.

Lord Jesus Christ, have mercy on us and on Your Holy Church. 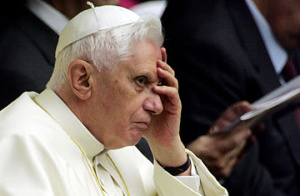