Obviously watch the whole thing, but don’t miss the silent stare-down into the camera at the 7:25 timestamp and what leads up to it. Powerful. Then, he goes into the fact that in the U.K., newborns who are born alive and then die (as a result of their mothers being poisoned with the Population Reduction Injections) are being falsely recorded as stillbirths… purely in order to avoid there being a coroner’s inquest, which is mandatory when a baby is born alive and dies, even if the child only lives for seconds. In the U.K., babies who die after living for DAYS are now being recorded as “stillbirths”.

Dr. Campbell is FINALLY realizing what we all knew from February ARSH 2020: This is all 100% intentional, meticulously planned, and has NOTHING to do with keeping people alive and healthy, but rather to make people sick, sterile and DEAD. It is a human population reduction campaign, and the largest crime against humanity ever executed by orders of magnitude. This is Our Lady’s words, “Entire nations will be annihilated…” playing out in realtime. WE. WERE. WARNED.

I hope Dr. Campbell doesn’t lose his mind, but as with anyone who isn’t firmly grounded in the One True Faith, processing the evil that is all around us, and not recognizing the overarching non-human driver behind it, is nearly impossible. Just stop and think about how terrifying it must be to NOT believe in God, to NOT believe in Our Lord Jesus Christ and His Resurrection, and to suddenly realize the evil that seemingly saturates the world, and to erroneously think that evil is all that there is, and that there is nothing Good against it, much less with the already 100% assured victory over it.

All these people can now see is the EVIL, and when that happens, men lose their minds. Sometimes this is referred to as “staring into the abyss.” Here are two examples of men driven insane by shell shock in WWI. This phenomenon is also being seen today by U.S. military veterans committing suicide after coming back from musloid countries and having been driven insane by eye-witnessing and being forced to tolerate bestiality and especially man-boy pedophilia. 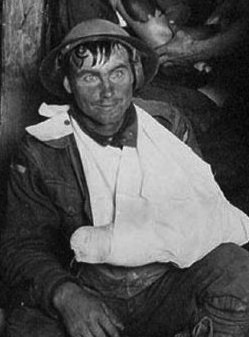 As we read/hear/recite at the conclusion of almost every Mass, “the abyss” – the total absence of Light – doesn’t really exist at all – the Light (Our Lord) is always there.

And the light shineth in darkness, and the darkness did not comprehend it.
Et lux in tenebris lucet, et tenebrae eam non comprehenderunt.

Remember in this verse, John 1: 5, the English rendering of “comprehend” means “to include or to encompass”, which is exactly right. The “darkness”, the “abyss” never does and never ever could, by ontological definition, “encompass” God Himself who IS HIMSELF EXISTENCE. So many today are being scandalized either out of the Church, or deeper into apostasy and atheism, precisely because they believe that there is no Light, or that the darkness has subsumed the Light, and that the Light has been proverbially extinguished. More on this most grievous error rooted in a lack of FAITH, the fruit of the First Glorious Mystery of the Rosary, the Resurrection, tomorrow in a super-cool science post.