So I guess now the new hotness is to freely admit that Pope Benedict never resigned the Office, only the active governance of the Church; that he believed and believes still that the Papacy is a “Fourth Level” of ordination that can never be resigned; and that Pope Benedict is, in fact, the Pope…

…while blithely ignoring the ontological and explicit canonical impossibility of calling a valid conclave while the Pope is still alive and occupying the See, and by extension the total logical absurdity of having multiple living Popes simultaneously.

How very modern. Refusing to deal with reality by pretending reality doesn’t matter. Or pretending that SUBSTANTIAL ERROR can be shrugged off with an effeminate “Meh”.

Today Canon 188, tomorrow the words of consecration of the Eucharist. “Meh.”

I’m reposting this Register piece IN FULL with screen caps for posterity, because it wouldn’t surprise me if they scrub this later today.

Please KEEP PRAYING the Matthew 17:20 intention with me:

-That Pope Benedict XVI Ratzinger be publicly recognized as the one and only living Pope, uninterrupted, since April ARSH 2005, whether he likes it or not

-That Antipope Bergoglio repent, revert to Catholicism, die in the state of grace in the fullness of time and someday achieve the Beatific Vision

-And that Pope Benedict repent of whatever he might need to repent of, die in the state of grace in the fullness of time and someday achieve the Beatific Vision.

The Pope Emeritus Puzzle: Will Pope Francis Rewrite the Rules of Resignation?

NEWS ANALYSIS: The Holy Father said if he stepped down, he would hear confessions and dedicate himself to the poor.

VATICAN CITY — With speculation running rife about whether Pope Francis could resign, and whether he might retire to a residence in the Vatican Gardens like Benedict XVI, it is worth analyzing what the Pope has actually said — and how this aligns with his wider project of a reform for the Roman Curia and the Catholic Church.

Speaking with the Mexican television company Televisa, Pope Francis has made it known, once again, that he does not intend to give up the Petrine ministry. If and when he does, though, he would not take the title of pope emeritus.

Instead, Francis would become bishop emeritus of Rome. He would hear confessions and dedicate himself to the poor.

Where Benedict and Francis Think Differently

His recent comments suggest Pope Francis might go to live in the Lateran Palace, which is the seat of the pope as bishop of Rome.

In the Televisa interview, Pope Francis also discussed — in clear terms — how he thinks the office of pope emeritus should be defined and how he would interpret his own role after a possible renunciation.

Pope Francis’ conception of the office differs from that of his predecessor: Benedict XVI decided to accept the title of pope emeritus and to continue wearing white, although without la pellegrina, which is the white mantle symbolizing episcopal authority.

Benedict XVI defined the terms of his resignation in his last general audience as pope on Feb. 27, 2013: “There can no longer be a return to the private sphere. My decision to resign the active exercise of the ministry does not revoke this. I do not return to private life, to a life of travel, meetings, receptions, conferences, and so on. I am not abandoning the cross, but remaining in a new way at the side of the crucified Lord. ”

Does One Stay Pope Forever?

In practice, Benedict XVI distinguished between the munus and the officium, that is, between the function and the exercise of the function. Once elected pope, he remains pope forever.

In a certain sense, Benedict XVI equated the election as pope with a further episcopal ordination. German theologian Karl Rahner, who emphasized that the power of order and the power of jurisdiction were indissociable, had come to consider the primacy conferred with the election as pope as the highest degree of the sacrament of orders. According to this criterion, the beginning of the pope’s Petrine ministry would represent a unique ordination.

Pope Francis, however, plans to be bishop emeritus of Rome. He would no longer have the Petrine primacy and therefore would return to work in public life as a confessor and likely also reside in the Lateran Palace.

This role was outlined by Father Gianfranco Ghirlanda, canonist and soon-to-be cardinal (at the August consistory), in an essay from 2013 republished by Civiltà Cattolica.

Seeking a Reform That Works

Father Ghirlanda’s essay offers many observations on the role of a pope emeritus, starting with the fact that ordination and authority are distinct from one another. The issue is a fundamental one and came up during the reform of the Roman Curia when laypeople were allowed to take up positions in the Curia departments.

If that is the standard, episcopal ordination is no longer a prerequisite for authority, much less collegiality with the pope, who is also a bishop.

In his statements, Pope Francis seems to be intending not to separate munus and officium. One ceases with the cessation of the other, and whoever renounces them returns to their previous life.

Will this be the reform that is announced for the office of pope emeritus? It is possible, certainly. The extent to which a bishop emeritus of Rome can influence the life of the Church will also require definition. By the admission of Pope Francis himself, everything in recent years has worked for the extraordinary character of Benedict XVI. But would it work the same with another pope emeritus? 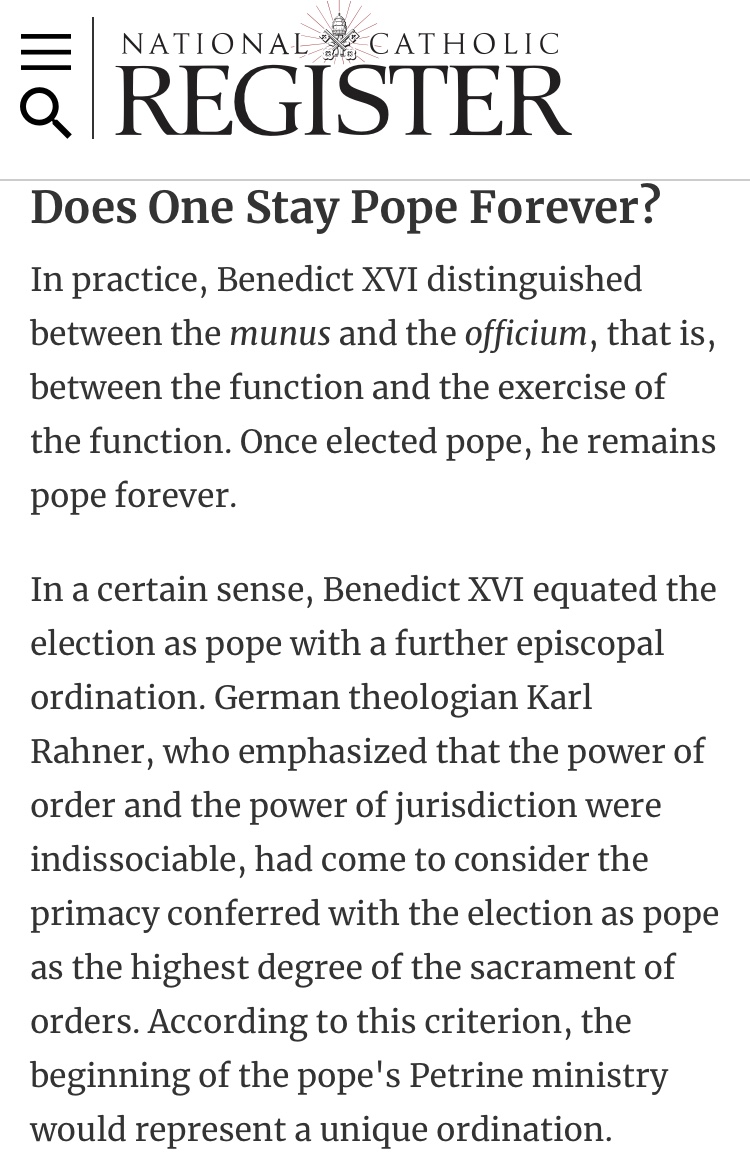