“Not my circus, not my monkeys.” “Not my problem to fix.” “Above my pay grade.” “All I can do is focus on myself and my immediate household.” “If other people are scandalized, that’s their problem and their own fault.” “I can’t be arsed.” “This bores me. I’m not interested.”

This is just a sample of things you hear every day that are not only contrary to the virtue of fraternal charity, but even trying to use its inverse, the vice of indifference and acedia, as a proof of sanctity. Everything must be rooted in charity. Every soul is infinitely precious to Our Lord who knit every man together in his mother’s womb, and incarnated, suffered, died and rose again so that men might be with Him forever in the Beatific Vision. ANY blanket statement of indifference or acedia towards one’s fellow man is massively disordered.

Our Lady, in her first trimester, underwent a long and physically arduous journey (probably on muleback) to help her elderly cousin Elizabeth then in her third trimester. Say what Our Lady said: “I have to go help.” Even with God Incarnate residing inside her womb, the ultimate paradigm of recourse, Our Lady didn’t merely pray for her cousin Elizabeth to the Infant Christ residing in her own womb, she PHYSICALLY WENT. For the love of Her Son, that is God Himself, she was filled with FRATERNAL CHARITY, that is, love for other human beings, and a desire to be of help and service at no small risk, inconvenience and discomfort (have you ever ridden a donkey?) to herself.

A very wise priest told me years ago that the number one mode of oppression that satan and the demons use in Rome which is the root of all of the wickedness in Rome, including all of the various sins against the 6th Commandment, is the vice of ACEDIA.  There is a demonic cloud of oppression parked over the city of Rome that rains down upon those living there every day and every night an acid rain of ACEDIA, pathological indifference and lovelessness – and hardly anyone in Rome is carrying a proverbial umbrella.  The Divine Office is barely prayed in Rome.  The Rosary is held in eyerolling contempt.  Adoration is sparse.  And almost every church has been physically desecrated by sodomites whose presence is UBIQUITOUS.

Acedia is the vice of indifference – to simply not care, but beyond that to NOT CARE THAT YOU DON’T CARE.  This makes perfect sense in light of our work on Diabolical Narcissism, which is the freely chosen self-purgation of charity (love) from the soul. Indifference is the opposite of love.

This cancer of acedia is why such massive corruption and sexual perversion has been able to explode into near-ubiquitousness over the past century.  Turning a blind eye.  Declaring indifference. “Not my problem.” “I can’t be arsed.”  “I don’t care who X is having sex with. I just like being fawned over by rich, powerful people.”

When what you are turning a blind eye to is the attempted rape and murder of the Bride of Christ, and thus the loss of countless souls, every one the beloved of Christ, the gravity of the fault goes exponential.

Beyond this, the new trend in “Trad, Inc.” is to declare indifference for Pope Benedict XVI, and rejection in the narcissistic formula, “Even if he is the Pope, I don’t WANT him back!”  Joseph Ratzinger matters.  The fact that he is the Vicar of Christ on Earth only underscores this.  The Blessed Virgin loved Peter even after he denied Our Lord and ran away from the foot of the Cross on Good Friday.  And she WOULD have received Judas Iscariot too, if he had gone to her.

Direct application to the Bergoglian Antipapacy: Other human beings matter.  Barricading yourself in your house – just “me ‘n Jesus” – washing your hands of the Bergoglian Antipapacy,  and declaring that it isn’t your problem is a lie and a cop-out. Publicly declaring and ginning up aggressive indifference to Pope Benedict XVI, and thus the Papacy itself is a species of acedia.  It is our problem, because other human beings are being scandalized unto damnation by it. Our Lady didn’t barricade herself in her house – just her and Jesus. She prayed AND acted.

Happy Feast of the Visitation.

Saint Elizabeth, pray for us.

Saint Zachariah, pray for us.

Saint John the Baptist, pray for us. 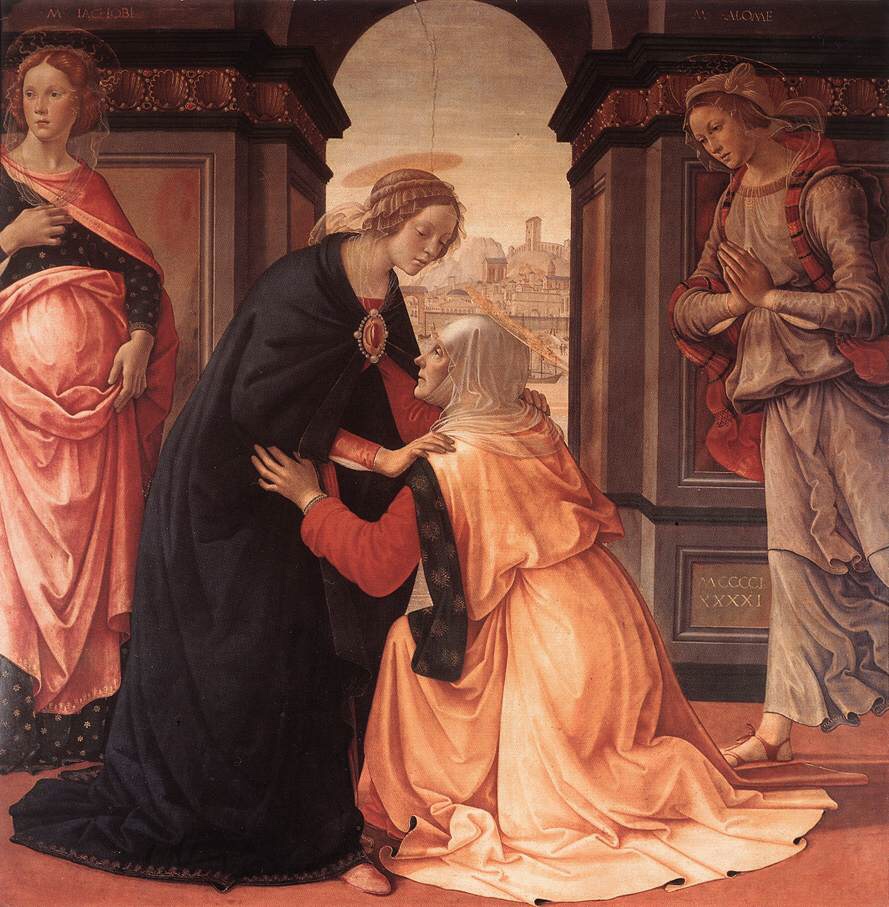