People are losing their faith.

They are losing their faith because a man who is not the pope is masquerading as the pope, people are calling him the pope, he is an agent of evil, enacting a satanic, Freemasonic, sodomitical agenda, and tearing the Church apart before their eyes.

They are losing their faith because they are being asked, and now even browbeaten into violating the Law of Non-contradiction, namely that they must be in unity and submission to a specific man, Jorge Bergoglio, as a condition of unity to the One, Holy, Catholic and Apostolic Church, while Bergoglio himself demands apostasy and schism to be in union with him – That Bergoglio is simultaneously the standard of unity and vector of schism, that Bergoglio is simultaneously a thing and its ontological negation.

As if this categorical irrationality weren’t enough, the drum is now being beaten that if one does NOT accept that the Petrine Promise is either void and has been all along OR that Our Blessed Lord reneged on the Petrine Promise some nine years ago, then you are a faithless person. That’s right: believe obvious lies, violate the Law of Non-contradiction, and believe that Christ is a faithless liar who puts people in Catch-22 positions… to prove what a good, faithful Catholic you are.

And nevermind the man in white, calling himself and called by others “Holy Father, Pope Benedict”, who lives in the Vatican, gives “my Apostolic blessing”, and clearly stated that he was only renouncing the “active governance” of the Church while remaining inside the “enclosure of St. Peter”, in his “novel” attempted partial resignation.

And especially ignore the fact that the Roman Curia is being exposed daily as a den of sodomy, money laundering, and murderous violence.

Nevermind the Good Shepherd Discourse. Follow the wolves with voices of Satan himself… to prove what a good, faithful person you are. You can’t lose! God will reward you!

Nevermind the Gospel, wherein Our Lord warns that false prophets – that is, IMPOSTORS – will lead astray, if possible, even the Elect.

Nah. Prove how strong your faith is by being led astray, because there will be no consequences for allowing yourself to be deceived! Jesus will love you all the more… for believing that Jesus is a faithless hireling who lies and feeds His sheep to the wolves for sport. That’s right. If you confess Christ to be an oath-breaking, capricious liar and lover of lawless chaos, and it is the College of Cardinals that are “infallible” with the capacity to sanate and ratify not just illegal, invalid conclaves, but also illegal, invalid papal resignations, then you will totally SAIL through your particular judgment. You betcha. Makes perfect sense.

I get emails and I know other bloggers get these same emails, because I have seen them address them.  Badly.  Well, here is an amalgamated sample of the things I hear.  And below is a FIRM ANSWER.  Not some idiotic nonsense and effeminate bleatings and mewlings about, “Well, don’t bother your pretty little head about “Pope Francis”, just focus on the other good popes!  Adopt a pope! Read all about Leo XIII and pay no attention to “Pope Francis” while he drives your children, grandchildren, friends and enemies into hell.  Just look away and pretend it isn’t happening!”

Isn’t the pope supposed to be supernaturally protected from ever doing even a fraction of the satanic, evil things this man is doing on a near-daily basis?  Didn’t Jesus say that Peter was the Rock upon which He would build His Church? Didn’t Jesus say that he had prayed specifically for Peter and that this prayer extended forward to ALL of the popes?  Is it all just a lie?  Is the Church a lie? Is the papacy a lie? Is Jesus a lie? Is God a lie?

Of course God hears our prayers.  Every one of them.  He even hears the groaning of our souls that we aren’t even consciously aware of, or able to articulate in words.  The problem is with us, and in this case, what we are praying for.

Praying that God make “Pope Francis” a good pope is like praying to God that He make “Caitlyn Jenner” the prettiest woman in the world.

“Caitlyn” Jenner is a man named BRUCE Jenner.  So we have a problem right off the bat.  Yes, God knows that when someone says “Caitlyn” Jenner they are referring to Bruce Jenner, but in calling Bruce Jenner by his drag queen name, it is clear right off the bat that the person in question praying the prayer has a completely disordered connection to reality, and in this case, sexual morality.

THEN, when a person asks God to “make Caitlyn Jenner the prettiest woman in the world”, because the petition is not only asking God to ratify, support and magnify public mortal sin and scandal, but is primordially detached from OBJECTIVE REALITY, namely that Bruce Jenner is A MAN, NOT A WOMAN, well, what do you think God does with such petitions?  How do such clearly immoral petitions, detached from reality, square or jibe with God’s Perfect Holiness, His Perfect Justice, or His being the Author and Sustainer of Reality Itself?  Now, God is omnipotent and can certainly do whatever He wants, but He is also RATIONAL, and thus is always internally consistent.  Scripture POUNDS on this truth of God being IMMUTABLE – that is, UNCHANGING.  His IMMUTABLE WILL is intimately tied up with His RATIONALITY. That is why we can trust Him, His Promises, and His Law.

Glory be to the Father, and to the Son, and to the Holy Ghost. As it was in the beginning, is now and ever shall be, world without end. Amen.

I think the Bruce Jenner example makes the concept easier to understand, but it maps precisely to asking God to make “Pope Francis” a good Pope.  First, “Pope Francis” IS NOT THE POPE AND NEVER HAS BEEN, so how can God make an Antipope a “good pope”?  This defies the Law of Non-contradiction.

In the case of the Bruce Jenner example above, beauty is a good thing, in fact, beauty is an attribute of God Himself.  For women to be authentically beautiful is certainly an intrinsically good thing.  HOWEVER, in the case of Bruce Jenner, the “beauty” being asked for is a false, inauthentic, inverted beauty, tied directly to a lie.  It is actually a scandalous monstrosity for a man to ape the beauty of women, so even though beauty qua beauty is good, to twist beauty into a satanic mockery of beauty is pure evil.

This concept is called corruptio optimi pessima, that is, corruption of the best thing is the worst kind of corruption. And make no mistake, the Papacy is a VERY GOOD THING. It is a priceless gift from the Divine Bridegroom to His Holy and Spotless Bride, the Church, outside of which there is no salvation.

Such is the case with Antipope Bergoglio.  We all want a good Pope, but asking for that attribute in the context of an ANTIPOPE is simply irrational.  Bergoglio IS NOT the pope, so what, exactly do you expect God to do with your petition that he be “a good pope”?  Once again, here we are right back at the Law of Non-contradiction.

What we all should be praying for is Pope Benedict XVI Ratzinger, and that he do no further harm, fully repent of and unwind what he has done, and be liberated from whatever fear, ERROR and disorientation he is under, that he die in the state of grace and achieve the Beatific Vision.  THEN we should all pray that ANTIPOPE Bergoglio be removed, and that Bergoglio repent of what he has done, REVERT TO CATHOLICISM, die in a state of grace, and achieve the Beatific Vision.

Now there’s a petition completely in accord with reality that God can work with.  And the odds don’t matter.  Remember Lepanto.  What matters most is whether or not what we are asking God for is in line with Reality and His Perfect Will and Justice.

Now, after reading this, can not every single one of you look back upon your lives and see numerous instances in which your prayers, in retrospect, turned out to be based on a false premise, or asking God to bring about, strengthen or maintain something that was sinful?  I know I can.  “What I want” is not by virtue of itself a valid petition that God can or will answer.  The key with prayer – MATURE PRAYER – is the discerning of the specific petition in and of itself.  Does it make sense?  Is it rooted in Reality and Truth? Is it perfectly Just? Is it in accord with God’s Will?

This is why prayers for “Pope Francis” to be “a good pope” are not only not doing any good, but actually causing people to lose their faith.  All false premises, eventually, after enough logical corollaries, lead straight to hell, straight to the feet of satan, “the father of lies”. This Antipope Bergoglio thing is going to get MUCH worse.  I think the odds are high that he is the False Prophet Forerunner of the Antichrist, and that he is instrumental in setting up a OneWorldReligion tied directly to the NewWorldOrder (U.N/Soros/Gates, etc.). He is going to split the Church and institute a new “liturgy”, which, it seems probable, will be the “abomination of desolation”.  People who cling to the false premise that this man is the Vicar of Jesus Christ on Earth will, it seems to me, either lose their faith if they haven’t already, or go completely bonkers, because there is only so much irrationality and internal contradiction that the human psyche can bear before it snaps.

Pray for Pope Benedict XVI, the one and only living Pope, whether he likes it or not, the Papacy, and Holy Mother Church.

Oh, and do not, under any circumstances, stop going to Mass, even if priests sneeringly mock and try to goad you into such. Go to Mass, and when “Francis” is erroneously commemorated, beg Our Lord to give YOU any temporal punishment the MIGHT be due the priest, if it will help. Imitate Our Sweet Lord, as He was being nailed to the Cross, “Father, forgive them, for they know not what they do.”

Imitate Our Blessed Lord in the Garden: “Give it to me, because they’re worth it.” 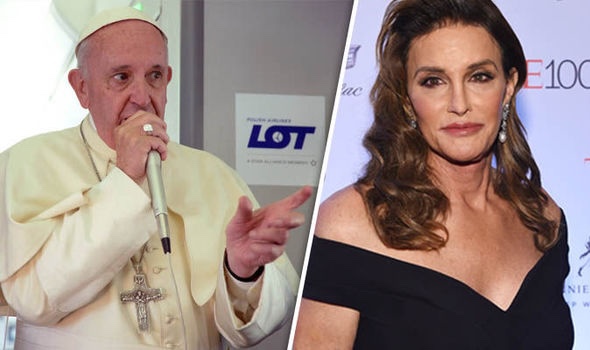