First things first:  HAVE YOU BOUGHT AND READ J. MICHAEL MILLER’S BOOK, “The Divine Right of the Papacy in Recent Ecumenical Theology” YET?

If not, why not?  It costs NINE BUCKS, downloads in seconds, and can be read in one evening.  Why in the world would anyone engaged in this, the most important question in the world today NOT buy and read a text that addresses DIRECTLY as its core thesis this business of “fundamentally transforming the Petrine Office” into a “collegial, synodal Petrine Ministry” consisting of multiple people simultaneously, with Pope Benedict cited multiple times, along with his mentor (Rahner) and close colleagues at Tubingen (Neumann and Kung), and the man Antipope Bergoglio immediately made one of his closest “advisors” and lauded as his “favorite theologian”, Walter Kasper?  What possible, possible reason could there be to NOT drop the nine bucks and three hours to read this book?

What possible, possible reason could there be to NOT engage the dataset?

It should also be mentioned that this book by now-Archbishop J. Michael Miller is actually Miller’s DOCTORAL DISSERTATION.  He completed his doctorate at the Gregorianum in ARSH 1979, and the Greg thought SO HIGHLY of his dissertation that they published it under their own imprint. It has been explained to me that when a Pontifical University publishes a doctoral dissertation, it is a very, very high compliment – the equivalent of getting an “A” or “A+”.

Interestingly, every time +Miller has been asked about his doctoral dissertation in light of Pope Benedict’s failed attempted partial resignation, +Miller has claimed to “not remember” his own doctoral thesis, nervously claiming that it “was a long time ago.” Riiiiight. Youbetcha.

Speaking of which, let’s look today at the opening sentence of Chapter 8 in Miller’s dissertation, “Contemporary Catholic Views on Papal Primacy Iure Divino”:

”The present crisis of the papacy is one of legitimation. (Footnote 1)”

And what is Footnote 1?  Why, it is none other than WALTER KASPER.

So, it is taken for granted by Miller that the papacy is in the midst of a crisis, and the crisis is one of the LEGITIMACY of the papacy itself, and he cites Walter Kasper for this turn of phrase.

If you buy and read Miller’s dissertation, you will see that the previous seven chapters are an agonizing analysis of two sets of terms:

”Irreversibility” is the question of whether or not the papacy can be TOTALLY ABOLISHED, that is, is the very existence of the Papacy irreversible in and of itself.  THE DEBATE AMONGST THE GERMAN THEOLOGIANS ON THIS QUESTION IS ROBUST, TO PUT IT MILDLY.  The fact that total abolition of the papacy was discussed at all, much less so widely and openly is a testament to how far gone the German theological scene was and is.

”Immutability” is the question of whether or not the Papacy can be CHANGED, you know, like “FUNDAMENTALLY TRANSFORMED”.  It was taken for granted by the German theologians that the papacy was NOT IMMUTABLE, and yes, COULD BE CHANGED, even radically.  Again, to be clear, it was the MODERATE position that yes, the papacy could be changed, but that the “Petrine Office” could not be totally abolished.  Thus, the MODERATE position would include MULIPLE PEOPLE SIMULTANEOUSLY EXERCISING DIFFERENT ASPECTS OF THE PETRINE MINISTRY, ALL UNDER THE UMBRELLA OF AN EXPANDED PETRINE OFFICE.

Thus, Miller’s dissertation is saturated with discussion of the DIFFERENCE between the Petrine OFFICE and the Petrine MINISTRY/FUNCTION, because so-called “ecumenical dialogue” with Lutherans and Anglicans ABSOLUTELY PIVOTS ON THIS PRECISION BETWEEN the PETRINE “OFFICE” and “MINISTRY/FUNCTION”.

Let me now blockquote page 195 with the screen cap below.  I am going to type up the text so that it populates onto the web and search engines. Emphases mine.

Although in dealing with the origins of the papacy contemporary theologians emphasize the close relation between ius divinum and ius humanum, when considering the permanence of the papacy they stress rather the distinction between the changeable and immutable elements.  This distinction within papal primacy as an institution is often formulated in terms of relation between a central unchangeable nucleus and its realization in changeable and historical forms. Theological (Footnote 98), exegetical (Footnote 99), and historical studies (Footnote 100) all make use of a similar distinction in explaining why a revision in the exercise of primatial authority is possible.

Another way of making the same point is to distinguish between the Petrine ministry or function, and the Papacy.   A sign and instrument of unity is needed for the government of the Church.  This task corresponds to what is also called the nucleus of the papacy.  For these theologians the papacy has been, and is, the historical realization of the Petrine ministry. The two realities are, however, conceptually distinct.

Footnote 98:
Burns, “Communion, Councils, and Collegiality,” 172; Kasper, in “Ministero petrino,” 56, contrasts the “essenza” of an institution, namely the Petrine office, with “una ben determinata forma della sua realizzazione;” McDonnell, “Papal Primacy,” 185-186; Thils in Primaute Pontificale, 171, distinguishes between “fond” and “forme.”  Rahner’s terminology varies, but he certainly hold that, although the papacy is iure divino, this does not exclude the possibility that “in the future the papacy, while retaining its basic ‘generic form’, will be able to present quite a different ‘image’ (if we may so express it) from that to which we have hitherto been accustomed” (“Basic Observations,” 18). Cf. Rahner, “Demokratie in der Kirche?” 8; Rahner, “Kirchliche Wandlungen,” 514; and Rahner, “Open Questions on Dogma,” 219. 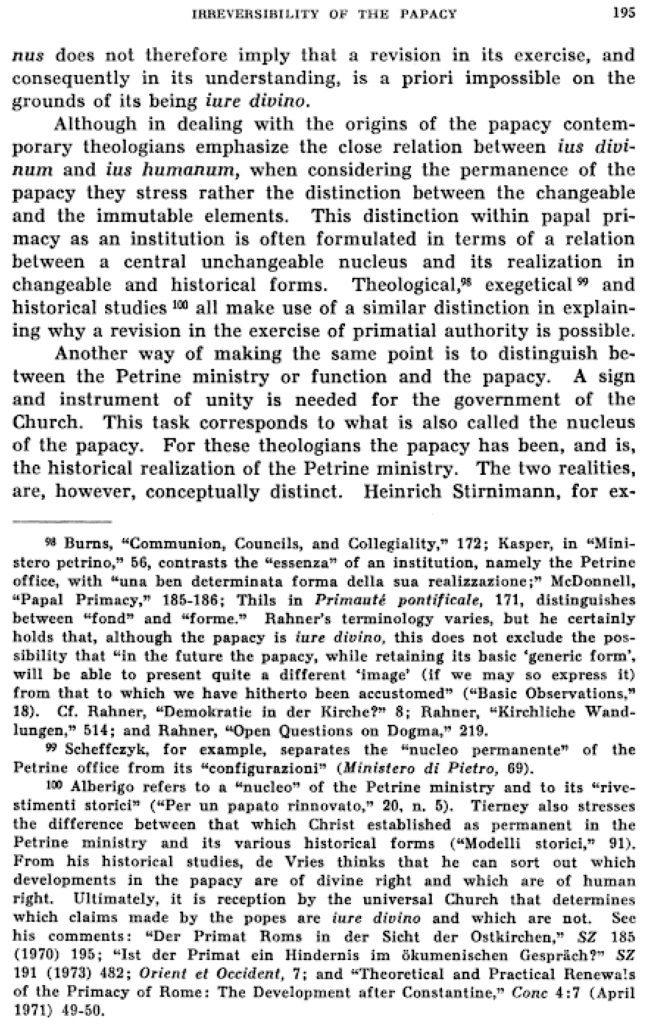 Hmmmm.  Maybe I DO see why people are refusing to buy and read Miller’s dissertation after all…. 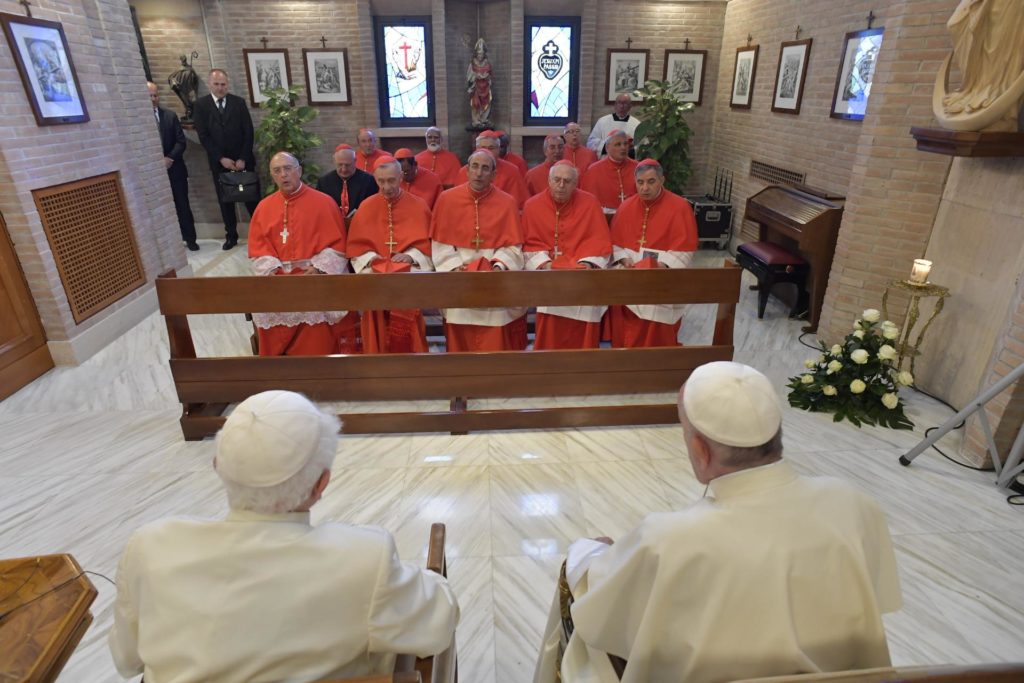 “In the future the papacy, while retaining its basic ‘generic form’, will be able to present quite a different ‘image’ (if we may so express it) from that to which we have hitherto been accustomed.” -Karl Rahner, Pope Benedict’s mentor, colleague and close friend, and widely considered to be one of the most influential theologians of the 20th century.