Thanks to one and all for the kind words and encouragement as we make strides in this effort to expose the Bergoglian Antipapacy and defend Holy Mother Church, the Divinely Instituted Petrine Office, the one and only Living Pope, Pope Benedict XVI Ratzinger, and to hopefully keep others in the Church Militant from falling into despair, sedevacantism or even being misled or browbeaten into embracing the Antichurch and its wretched mascot, Antipope Jorge Bergoglio.

The confusion about the identity of the true pope in St. Vincent’s day was a political question. St. Vincent never backed a raging heretic, nor would he have. Let that be said and well understood. However, St. Vincent was lied to by false friends and misled, and thus, for a time, called an antipope “Pope” and commemorated an Antipope at the Te Igitur every day as he celebrated Mass. St. Vincent was such a holy man that he continued to perform spectacular miracles even while he was mistakenly commemorating an Antipope in the Mass.

When the truth was fully exposed, and the controversy surrounding the identity of the Pope resolved, St. Vincent corrected his error immediately. But, can you imagine how St. Vincent felt knowing that he had commemorated an antipope hundreds of times in the Mass? Even though St. Vincent’s mistake was a completely honest one, and others had deceived him, being such a holy man, he must have felt awful. No sane person is ever happy to have made a mistake, even an honest one.

Given this, can you imagine how solicitous St. Vincent is for ALL OF US in these days? Can you imagine how keenly he wants to intercede for the correction of the people who are wrong, and how much he wants to intercede in assistance to and support of those who are right? And because St. Vincent has the Beatific Vision, he has all information and knows EXACTLY what the truth is.

Please join me in asking for St. Vincent Ferrer’s intercession as we fight for Holy Mother Church, the Petrine Office, the Pope, and for our fellow man. 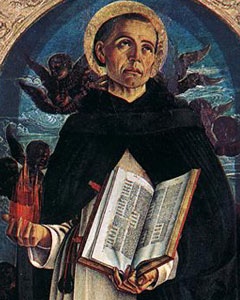 Don’t forget the Matthew 17:20 Initiative as well: full fasting twice per week and daily prayer that:

-Pope Benedict XVI Ratzinger be publicly acknowledged as having been the one and only living Pope since April ARSH 2005.

-Jorge Bergoglio repent, revert to Catholicism, eventually die in a state of grace and someday achieve the Beatific Vision.

St. Vincent Ferrer, pray for us!