Heraldry is the art and practical science of creating Coats of Arms. As Americans, we don’t have much day-to-day engagement with crests and coats of arms because we don’t have formal aristocracy or nobility, but it is a very old and very serious discipline.

Heraldists study the rich symbolism of the design of coats of arms, and then help people design and modify their crests. Crests are intended to COMMUNICATE STATUS, PROVENANCE and CONNECTIONS.

The Pope, being the earthly Absolute Monarch of Monarchs, obviously has a coat of arms that clearly communicates his status as such, and thus his authority and universal jurisdiction. Most papal crests also include references to the Pope’s familial and local origins, and his connections to religious orders.

Put simply, Coats of Arms and what they contain and communicate are a big deal. And Pope Benedict knows this.

And so it is with interest that we see reportage that the great heraldist Cardinal Andrea Cordero Lanza di Montezemolo, who designed Pope Benedict’s papal coat of arms in ARSH 2005, immediately contacted Pope Benedict after the announcement of his failed attempt at partially resigning and offered to modify Pope Benedict’s crest in order to remove the heraldic symbols of JURISDICTION, and… wait for it… Pope Benedict waved him off. Nah, leave it.

So, Pope Benedict after explicitly declaring himself from literally the first HOURS of his Pontificate to be under pressure and coercion such that he might FLEE:

“Pray for me, that I may not flee for fear of the wolves.”

MASS, IMPOSITION OF THE PALLIUM AND CONFERRAL OF THE FISHERMAN’S RING FOR THE BEGINNING OF THE PETRINE MINISTRY
OF THE BISHOP OF ROME

HOMILY OF HIS HOLINESS BENEDICT XVI

…attempts to flee by only resigning “the active governance of The Church”, continues to live in the Vatican, wear the Papal white, be called by and sign his Papal name in the Papal style, “His Holiness Pope Benedict”, continues to give the Apostolic Blessing which is exclusive to the Pope, and continues to Confirm the Brethren by releasing books and letters, continues to receive and be shown public obeisance by new Cardinals, and continues to release photos of himself such that he remains visible to the world.

And now we have testimony that he refused to change his coat of arms, specifically to remove any heraldic symbols of JURISDICTION.

At this point, knowing all of this, one has to be wilfully living in some sort of escapist fantasy AND think that Jesus Christ is a LIAR, and therefore not Divine, in order to actually believe that the obvious Freemasonic-luciferian apostate criminal Bergoglio is or ever was the Pope, when we can so clearly SEE what happened in February of ARSH 2013, and what continues to be so glaringly visible to this day: Pope Benedict never validly resigned.

So the choice is clear:

Either you believe that Christ is God, and that He can neither deceive nor be deceived, and that He is perfectly, infinitely faithful to His word and His promises;

OR you believe that “Fwanciss” is Pope. But the funny thing is, if you choose to believe that Fwanciss is Pope and therefore Christ is a faithless, oath breaking liar, then you by definition deny Christ’s divinity. And if Christ isn’t divine, THEN THERE IS NO CHURCH, and therefore there IS NO POPE. So in choosing that Fwanciss is Pope, you are BREAKING THE LAW of NON-CONTRADICTION by insisting that Bergoglio is something that your base premise explicitly denies the existence of. How can something that doesn’t even exist according to the base premise have a “head”?

I’m telling you folks, pridefully holding the flatly irrational and internally contradictory premise that Bergoglio is the Pope will yield NOTHING but heresy, schism, apostasy, and atheism. Such a sad soul will descend into a raging, foaming, SPITEFUL hatred of God and will thus CHOOSE HELL WITH COMPLETE FREEDOM in service to their own pride, exactly as satan did.

The See of Peter is occupied by the true Pope, Pope Benedict Ratzinger, but has been usurped by Antipope Bergoglio, who sits at the head of the Antichurch. The True Church is visible, but in eclipse – and remember, eclipses are not only highly visible, but terrifying to behold. Eclipse doesn’t mean invisible. It means an obscuring, a loss of power or significance in relation to another thing.

Pray for Pope Benedict gloriously reigning in the sixteenth year of his pontificate whether he likes it or not, for the Papacy, immutable and irreversible, founded by Christ Himself as the rock upon which He would build His Holy Church, and for Holy Mother Church, spotless, indefectible, visible, and in terrifying eclipse.

Lord Jesus Christ, the Way, the Truth and the Life, have mercy on us. 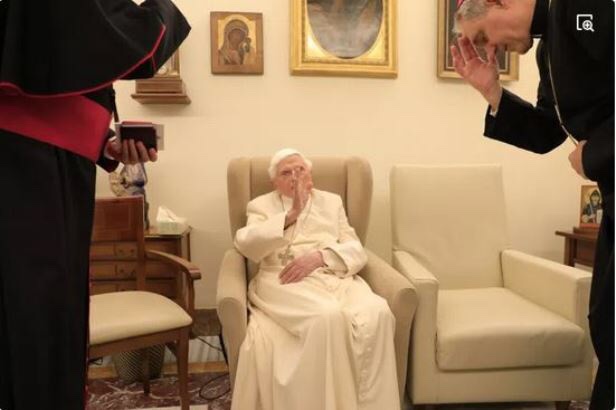