By now most people have seen this image of an obese black sodomite woman who is hired to give luciferian workshops on “Critical Race Theory”. 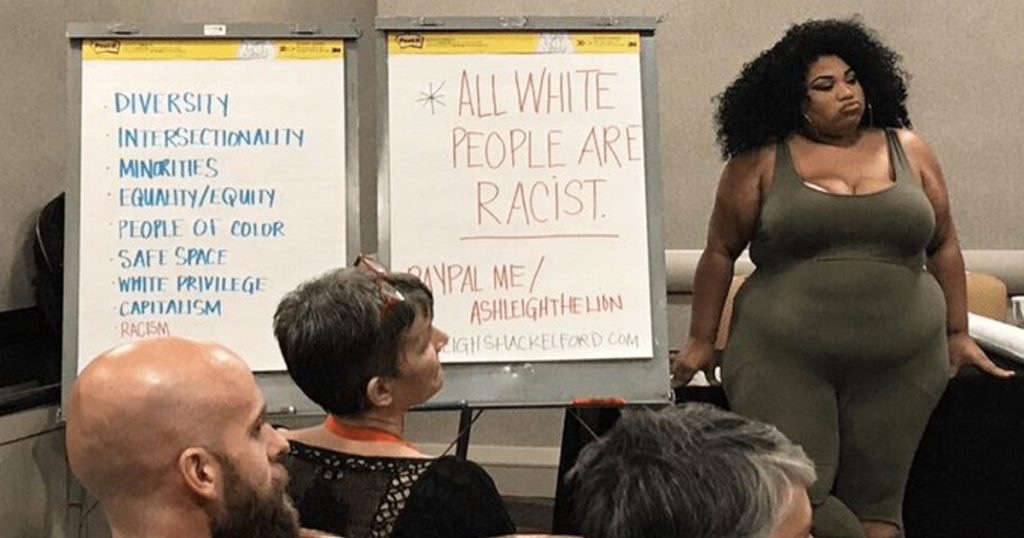 We look at this and roll our eyes and shake our heads in a combination of revulsion and pity, but then we move on.

Something prompted me to go to this sick woman’s website as written on her flip board, and what I found was far more disturbing than even I, jaded as I am, ever expected.

This woman is AGGRESSIVELY suicidal. The demonic emotional palette has so utterly consumed this woman that she is totally devoid of any hope or capacity for happiness. She is already in hell. THIS is Diabolical Narcissism in its most advanced form.

I’m reminded of another psychopath narcissist black-ish woman who claimed that she was suicidal due to “racism”: Meghan Markle.

The thing about suicidal narcissists is that they have a very nasty habit of becoming MURDEROUS suicidal narcissists. Cross reference: the islamic political faux-religion.  Why? Because like the demons they emulate, Diabolical Narcissists are fueled and animated by SPITE. It is the perfect inversion of the One True Faith – love of neighbor proceeding from the love of God.  That inverts to hatred of neighbor and hatred of self proceeding from a hatred of God who is pure Love.

I’m going to post Shackelford’s essay “Nowhere to be suicidal, nowhere to be free” in full so that if her website is deleted, there will be a record here of the pure evil of the Marxist/CRT religion carried to its full, satanic fruition.

Folks, this is NOT SATIRE. She’s deathly serious, and organizations pay her to “improve culture”.

Where do you go when the world wants you dead and the people who love you want you free? Where do you run when there is nowhere to hide from antiblack violence, and there’s nowhere to tell the truth about wanting to die?

Am I allowed to be honest?

Don’t call 911. Don’t call my therapist. Don’t report my posts on Twitter. Don’t reach out to my friends. Don’t make a post online looking for me. Don’t run away when I ask you to listen to my tears and hold my truth. Please don’t make me pretend that I want to live.

In Audre Lorde’s poem ‘Litany for Survival,’ she says, “When we are silent, we are still afraid; So it is better to speak remembering we were never meant to survive.” I want to speak. I want to scream. I want to be forthright. But we can’t be honest if the consequence is a cage. Anytime the state is called for those of us navigating suicide, the result is being institutionalized or being killed. When resources for suicide are offered, many of those spaces force you into silence or performance because the expectation is that access to support means you’ll develop a will to live. When we tell people who love us that we want to die, everyone rushes to fix us or shush us. We were never meant to survive, and there isn’t anywhere to speak on how we’re not surviving.

Suicide, for many of us, is a response to a world designed to kill us. Suicide can be an intervention to trauma, unmet needs, and a way to end our pain. Suicide, for some of us, is a way to reclaim power and choice as oppressed people when nothing happening to us is within our control and when state violence is quotidian. Suicide, for many of us, is sometimes not about ending your life but seeking ways to end our despair when no other options exist. And even still, we are demanded that we live through it, find a way, make it make sense, remain quiet, maintain suffering pending joy, or pretend for the sake of everyone else.

I’ve tried to kill myself four times consciously. The first time was when I was 11 and the most recent time was last year. I’ve also probably tried to kill myself a million times unconsciously through toxic coping mechanisms, through organizing against the state, through being a reckless ass nigga, and by overstaying relationships where only death was served. And I’m still here dying to die. Nothing has made me feel “better” and nothing has changed my mind. Nothing has intervened antiblackness and nothing has stopped the daily demand for Black death. Nothing has changed. I’m still incurably sad. I’m still a forever suicidal ass nigga.

Can anyone hold these devastating truths? Am I allowed to be still in wanting to die without punishment? Can I please go, or at least tell you that I want to go even if I don’t? Will you hate me more than this unliveable world? Will you resent me more than the inevitable consequence of being Black? Is it possible to hold me with love, with ease, and without guilt?

I wish that the people who love me could live in the escapism that I am a whole person who wants to live forever with my niggas, because who am I to ruin their fantasies of me that keep them more alive. I wish I could avoid being the reason for a life-shattering tragedy and imparting sadness on other people. I wish I wanted to be here. I wish I wasn’t a burden in a world that buries us.

The most unimaginable loneliness of suicidality is that not only does the world demand you live but the people who love you can’t hold your truth without dying too. Everyone is heartbroken from your inability to stay, and no one has the capacity to hear that you will leave them more alone in this forsaken world. No one can hold your hand because they can’t bear to lose your pulse. No one can listen to your cries because they can’t help but cry too. The wellness, care, and affirmation of the people you love become another weight you have no strength to hold.

So this essay is for niggas who want to die and can’t, don’t, failed, or haven’t yet.

As I sit here contemplating dying, I realize that there is no place to run. There’s probably someone reporting this essay as we speak because they believe I’m a harm to myself and my readers. There’s probably someone asking if I’m okay in my comments despite that there isn’t an ‘okay’ I’ll ever embody. There are probably 17 missed calls from my mom who’s terrified that this time is different than the last. My broken heart breaks everyone else’s so every morning I tape the pieces together to pretend that I’m fine.