Summorum Pontificum is a stop-gap and was only ever intended as such. Everyone with two brain cells to rub together who isn’t addicted to grifting good-hearted and generous Trad Catholics, addicted to benzodiazepines and/or has more faith in Evolution and Martians than Jesus Christ, knows this.

The reason Pope Benedict deployed the “two forms of the same Rite” language, thus “Extraordinary Form” for the August and venerable Rite of Pius V, and “Ordinary Form” for the Novus Ordo, is because if he hadn’t specifically done that, almost every bishop on earth, being almost totally infiltrated by Freemasons, God-hating heretics, apostates, and/or sodomites, would have instantly demanded that every priest offering the Traditional Latin Mass acquire “bi-ritual faculties”. As if they were asking permission to offer the Divine Liturgy in one of the Byzantine Rites – which is a TOTALLY legit permission. I know bi-ritual priests, and there is significant legwork associated with the permission, as there should be so as to avoid every hint of syncretism (mixing the two Rites together).

How would the infiltrator Swishops have used the “bi-ritual faculty” thing to totally forbid and quash the TLM? Probably by giving a Latin grammar exam that Cicero himself couldn’t have passed. “Sorry, you aren’t fluent in Latin, so you can’t offer the Mass in Latin.”

Folks, it would be EASY to formulate an English grammar exam that I would fail spectacularly. Grammar goes deep – far, far beyond the “vulgar” use of any language by its mother-tongue speakers and writers. Latin is no different.

Pope Benedict, knowing exactly the fiends he was totally surrounded by and up against and (in his mind, almost certainly) overwhelmed by, wrote SP so as to cut them off at the pass: “two forms of the Roman Rite, Ordinary and Extraordinary”… therefore NO BI-RITUAL FACULTIES NEEDED.

Then the invalid attempted resignation and the Bergoglian Antipapacy happened.

And let me say this now so you all understand what is happening:

All “Trad Inc.” partisans who are now happily looking forward to the suppression of the TLM when the “reimagining” of Summorum Pontificum by Antipope Bergoglio is released on July 7th (the anniversary of SP being promulgated by Pope Benedict in ARSH 2007) is because… wait for it…

THEY PRIVATELY HATE AND DESPISE LITURGY, ESPECIALLY THE MASS. They want it suppressed so they have another “excuse” to not go to the Foot of the Cross.

One Trad Inc. $20k per month grift-master has totally apostatized, and went to Mass on Easter 2021 only because his wife forced him to go, and he hadn’t been to Mass for the previous 13 months, even though it was available DAILY even though the lockdowns, and hasn’t been since. Pray that his newborn somehow, someway gets baptized, and isn’t used as a tool of rebellion against God by his apostate father.

His psychological puppet-mistress, a self-confessed benzodiazepine-dependent with self-confessed massive psychiatric and preternatural oppressions (i.e. received a Novus Ordo demonic exorcism in the mid-80s) and braggadocious grifter of “gullible dumb-ass Trads” has only attended Mass a few times per YEAR for over a decade, despite claims of being an intimately involved parishioner in Rome, and then, even more unjustly and scandalously, poisoning the reputation of a Benedictine monastery in Europe. This truly wicked harridan tried for years to get me to become an oblate of this excellent Benedictine monastery by saying, “You’re dumb if you actually go to Mass. If you become an oblate, and the oblation thing is all meaningless- all you do is scribble a signature in a book – then you get all the merits of the Monks in their praying of the Office and Mass. And then you don’t have to sit through all of that long, STUPID, BOOOORING liturgy. I’d maybe go to Mass if it weren’t so LONG and BOOORING. But I don’t have to, because I’m an oblate. Oh yeah, you’re stupid if you ACTUALLY GO.”

And THAT, friends, is why I never became an oblate of anything, and probably never will. Even though I know that that woman was in those many repeated diatribes the voice of satan himself, that mind worm poison of “you legally get the merit…” means I’ll never personally become an oblate. Because I want to go. I want to be at the Foot of the Cross. No excuses. No imagined legalistic dispensations. And that’s okay.

Aside: Why am I suddenly craving incredibly delicious BEER??? 🤔

LET THE ROMAN RITE be totally suppressed! Good! Break Romanism! Break Latinism! Break the Papacy! Catholicism has become IDOLATRY in and of itself! Evolution and UFOs are reality. Catholicism has no future. We were all victimized by a cult! Ratzinger can go to hell! He abandoned us just like my Boomer dad! The sooner these dumb-ass Trads are broken of their idolatry to the Mass and the Papacy, the better! Where’s my whiskey? Where’s my Xanax! Where’s my video game controller? Wait- I’m gonna yell at the dumb-asses and demand they give me money. Can you believe these maroons? Just yell at them and they give you THOUSANDS of dollars!

Pope Benedict tried to make Summorum Pontificum as well-defended as possible by deploying the “two forms of the same Rite” language.

But now, it’s up to others to step up. From Cardinal Princes to unlettered laynothings. This is total war, and total war requires EVERYONE to stand and fight. And die. Isn’t it funny how the grifters suddenly embrace the “hermitage” when shit gets real. Sadly, these psychos are so devoid of self awareness that they think no one sees straight through them.

I’ll see you all on the battlefield, and in front of the Tabernacle, where we are all brought together – Remnant Church Militant, Church Suffering, and Church Triumphant. 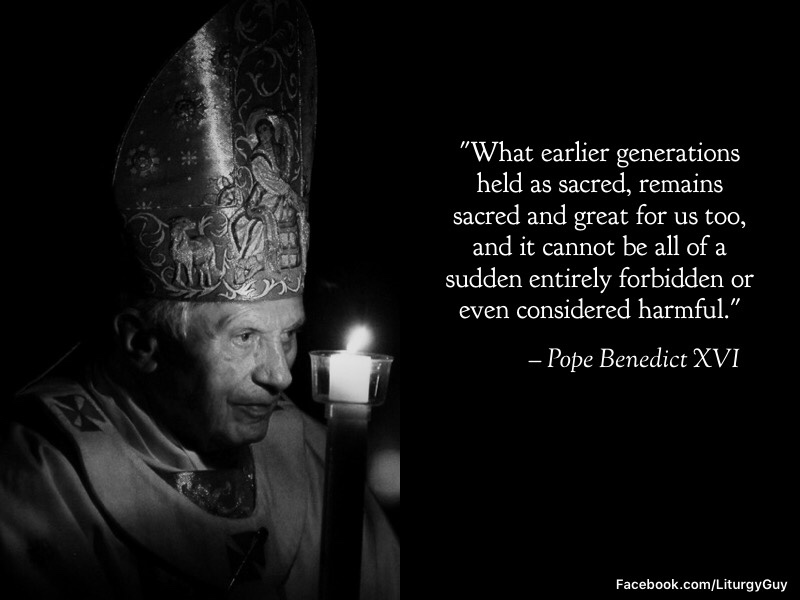