(Scroll down for new content.  I’m leaving this incredibly important post at the top of the blog for a while.)

Folks, an absolutely FANTASTIC new book, “Benedict XVI: Pope ‘Emeritus’?”,  has just been published that I cannot recommend strongly enough.  Everyone should buy a copy of this book not only for themselves, but also buy copies to distribute, especially to priests.  It is a SYSTEMATIC, COMPREHENSIVE presentation of the dataset regarding the invalidity of Pope Benedict’s putative resignation assembled by a Columbian attorney named Estefanía Acosta. This book is so good and so well done that I am convinced that it is the fruit of the prayers of the faithful.

Miss Acosta, born in ARSH 1989, is a native of Medellin, Colombia and has her Masters in Law from the University of Medellin, with her thesis (with honors) being in constitutional law.  She has been an official of the “State Judicial Power” in Colombia, as well as a university professor specializing in the areas of civil and commercial law.  She is a cradle Catholic “revert” desiring to use her education and abilities to defend the rights of God, His Holy Church, and the Papacy.  She has accomplished this goal with the publication of this book.

The book is divided into three sections.  The first, and most important, is the presentation of the canonically air-tight case that Pope Benedict’s attempted resignation in ARSH 2013 was invalid.  The second section, included for the sake of systematic thoroughness, addresses the faux-conclave of ARSH 2013 and Jorge Bergoglio’s heresy, ties to Freemasonry, and non-Catholicity,  but is an historically important record of the infiltration and corruption of the Vatican and College of Cardinals. The Third section is a series of valuable appendices.

The base premise of the book is that Pope Benedict’s attempted resignation was invalid and that he is and has been the one and only living Vicar of Christ since April ARSH 2005.  It is important to remember that this totally unprecedented Antipapacy is like a gangrenous leg, with the infection up to the knee.  If only the foot is amputated, the gangrene will still be present and kill the victim.  FOCUSING ONLY ON THE FAUX-CONCLAVE of ARSH 2013 and/or Jorge Bergoglio’s heresy/apostasy and NOT the ROOT ISSUE OF THE INVALIDITY OF POPE BENEDICT’S ATTEMPTED RESIGNATION is like amputating only the foot of a gangrenous leg – a futile gesture that will only make the situation worse by enabling the installation of ANOTHER ANTIPOPE.  There WAS NO VALID CONCLAVE in ARSH 2013. Jorge Bergoglio is not now and never, ever has been the Pope, and therefore cannot be “deposed” from an office which he has NEVER OCCUPIED.

The only thing I want to warn readers of is the “clunkiness” of parts of the English translation.  It is totally readable and comprehensible, but it is not the silky-smooth prose of a native English speaker.  That’s okay.  This is no problem at all.  I stand in awe of the sheer amount of work that went into this book and its translations.  As of the initial release right now, it is available in Spanish, Portuguese and English, and is available both as a hefty, high-quality paperback and as an e-book.

Folks, BUY THIS BOOK. It will go down in history.

Oh, and as if you needed more encouragement, the 37th and 38th words of the preface are, “Dr. Mazza.” ‘Nuff said. 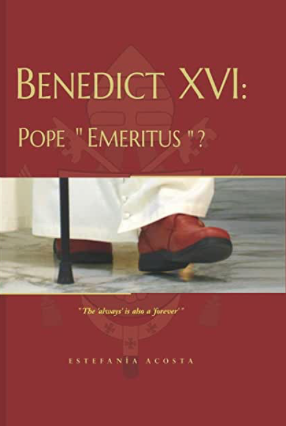