I saw the liquefaction of the blood of St. Januarius/Gennaro many years ago on a daytrip from Rome to Naples on his May feast day and procession. I saw the blood sloshing inside the reliquary flask very clearly as I walked a short distance behind in the procession.

Today, for the December 16th liquefaction, which is tied to the miraculous saving of Naples from an eruption of Mt. Vesuvius on 16 December ARSH 1681 by mass intercessory prayer to St. Januarius, the blood remained totally solid. These rare failures in the liquefactions have generally served as forewarnings of natural disaster or war in and around Naples. The blood failed to liquefy only three times in the 20th century: ARSH 1939 (WWII), ARSH 1944 (Vesuvius eruption) and ARSH 1980 (severe 6.9 earthquake).

So… yeah. The Remnant Church is basically unanimous in the acknowledgment that Rome “has it coming”, and I’m not talking about a mere lockdown – I’m talking about physical destruction, and as I state in this space pretty much daily, the ONLY way out of the CoronaScam religion’s takeover is war or supernatural intervention. It will never, ever end any more than the political religion of islam. It is here to stay until it is exterminated as the Nazi political religion was exterminated.

Stay confessed. Acknowledge consciously that every Mass you attend could be your last, and every Sacramental Communion you make could be your Viaticum.

Vesuvius and the massive caldera situated between Rome and Naples could literally make fire and brimstone rain down upon Rome.

To say “we have been warned” is the understatement of the century.

St. Januarius, pray for us. 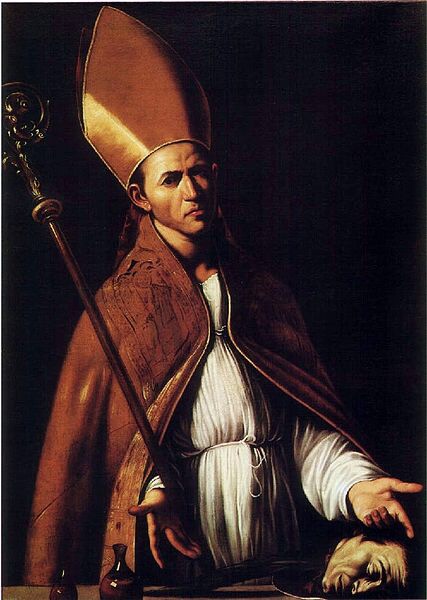 St. Januarius showing his own relics, Louis Finson, circa ARSH 1606