Early in the Fourth Century, there was a terrible heresy in the Church put forth by a very persuasive man named Arius. Arius contended that Christ was not fully divine, but a creature, created by the Father. It pivoted on one letter in one word: the letter “i”. The word homoousios means “same substance”, whereas the word homoiousios means “similar substance”. Arius contended that Our Lord was not of the same substance as the Father, but merely “similar”. The council of Nicea affirmed the Father, Son, and Holy Ghost are of the homoousious (same substance). 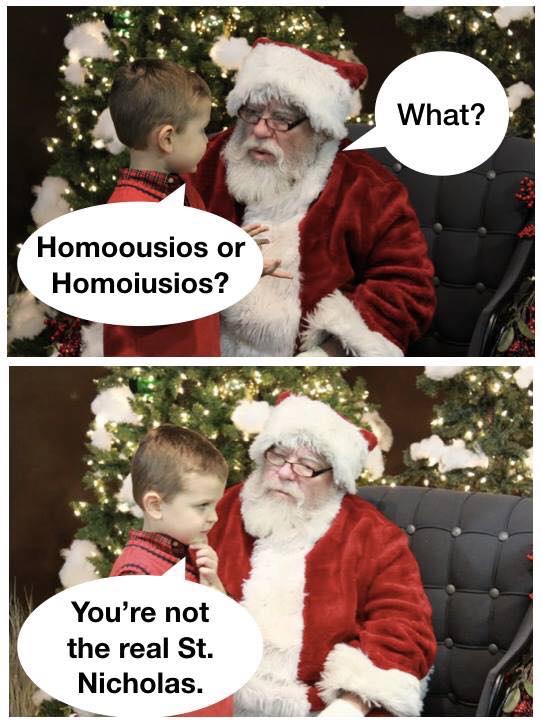 This heresy was threatening to schism the Church. (Back then everyone understood the truth that any heresy whatsoever was totally and completely evil and thus unacceptable – the Church is ONE. Christ has ONE Bride, not a harem. There is ONE Truth. Not multiple “”truths””. As soon as you start saying that there are ”multiple truths”, what you have done is denied Truth Itself, of which there is only ONE.)

So, the First Council of Nicea was called in ARSH 325 to hash this out and put the Arian heresy down once and for all. Arius was at the Council, of course, and was called upon to defend his position on the inferiority of Christ. Being a bishop, Nikolaos of Myra (in present-day Turkey) was naturally in attendance. Arius’ nonsensical, destructive and insulting lying contentions about Our Lord became too much for Bishop Nikolaos, who stood up and proceeded to haul off and go all Manny Pacquiao on Arius with a jab directly to Arius’ piehole. (See image above.)