Over the transom from Susan Matthiesen…

Please know that on PAGE 15 of the MCCARRICK REPORT they are covering up his teenage homosexual activities. Since the report starts off at the beginning with cover-ups and lies, why would anyone believe the rest of the report?

Below is the timeline for McCarrick’s teenage years at Xavier, the year and a half between Xavier and Fordham Prep, and his three missing years out of public view by the age of 20 when he was more than likely being groomed for the sodomite priesthood by Cardinal “Nellie” Spellman’s homosexual network. Where was “Teddy” and what was he doing those the 16 months between Xavier and Fordham Prep?

Also, note the wording in my article of the paragraph for the dates May 1946 – September 1947. “Missing for 16 months with undisclosed whereabouts” were the exact words that a friend who entered Xavier the same year that McCarrick did wrote to me. I accused Taylor Marshall of plagiarism. He wrote his book INFILTRATION by looking everything up on the internet then copying and pasting and on page 122 (I think) of his book he used my timeline and the EXACT SAME words of my friend – “undisclosed whereabouts” – except Marshall said “whereabouts undisclosed.” I didn’t even think of that wording – my friend did – which is why I know that Taylor Marshall was using my timeline.

At any rate, no one paid attention to what seems to be so obvious – which is that, given the academic rigor of both Xavier and Fordham Prep in those days, “Teddy” would never have gotten into Fordham Prep after truancy, poor grades and being expelled from Xavier. But Cardinal Spellman definitely could get him in. After “Teddy” entered Fordham Prep he zoomed to the top of his class and earned 4 superiors his senior year. Some turnaround from 16 months before when he was expelled from Xavier. 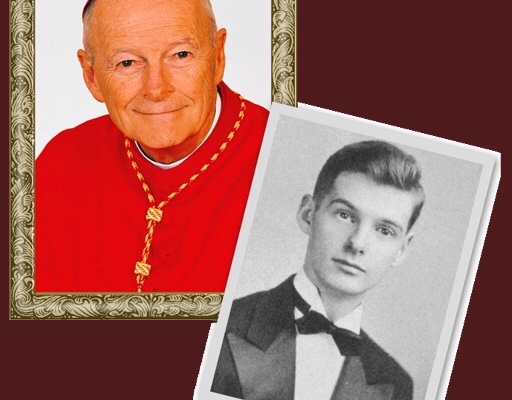 A year ago or so I contacted George Neumayr and he agreed with me. I asked him if he could somehow get Xavier to let him see their archives for the year McCarrick had been expelled – school year of 1945-46 but nothing ever came of it.

Please read the comments after the post. I posted three of these articles on McCarrick but got criticized for it being gossip and not factual. Well, it IS factual. Every bit of it.