(This is very interesting. I still think Canon 332.2 is very, very important, obviously, but this civil attorney’s insights into Canon 188 clearly triggering the investigation and inclusion of the dataset external to the resignation text “Non solum propter” by means of the Substantial Error clause is just another interlocking facet in the solid polyhedron that forms the case of the invalidity of the resignation. This attorney is absolutely right; Canon 188 speaks EXCLUSIVELY to MOTIVE: Fear/Coercion, Substantial Error, or Simony(Being bought off). –AB)

I just wanted to let you know that your last post concerning the invalid resignation, “Can substantial error be objectively demonstrated,” turned out to be a real epiphany for me. I have watched all your videos and read all your posts on this topic and spent hours upon hours trying to wrap my head around this mess and I knew in my heart you were correct. However, I could not get past the words Benedict used to resign because they seemed to demonstrate a real intent to resign the office even though he used the word ministry– largely because he declared the See vacant and called for a new conclave.

While this has been in front of me the whole time, your last post on this for some reason made some things very clear to me, and helped me get over the mental roadblock I constructed for myself, and I think it is one that others are going through, including Taylor Marshall who  is dissecting the Latin words Benedict used for resignation to show that he did resign the Petrine Office. I was making the same mistake as Marshall. I am even more embarrassed because I am civil lawyer who is trained in analyzing legal language, and yet I could not see what was right in front of me the whole time until your last post.

I’m not telling you anything you don’t already know, I am just letting you know my thought process and how I got over it because I suspect many others have the same hang up. All of this hinges on Canon 188. It’s all about understanding the point and purpose of Canon 188.

In American law, normally a court will not look outside the four corners of a legal document to determine the intent of the parties to the contract unless there is ambiguity within the document itself. In other words, whatever happens or is said that is not contained in the legal document is irrelevant because all that matters in what the document says. My error was that while I recognized all the other statements from Benedict and Ganswein, Benedicts own actions, and the theological treatises discussing splitting the Petrine ministry, I told myself that none of that mattered because the language used in the resignation itself demonstrated a clear intent to give up the OFFICE of Pope. The fact he declared the See vacant  and called for a Conclave was a big hang up for me.  I was stuck on the language used in the resignation itself, which seemed definitive.

After your post, I realized that Canon 188 is all about his MOTIVE for resigning. Canon 188 assumes there was a resignation of some sort to begin with. It wasn’t that no resignation occurred, it was that some type of resignation DID occur, which triggered Canon 188. Canon 188 requires us to look outside the resignation itself to determine if it was made in substantial error. The actual words Benedict used to resign really are not that important other than to provide evidence of what his motive was. But Canon 188 also allows for us to consider all these other subsequent statements, actions, and theological treatises because it goes to Benedict’s motive. MOTIVE MOTIVE MOTIVE– that is what Canon 188 is all about, that is what I missed being caught up on dissecting the language he used to resign, which others, including Marshall are doing. 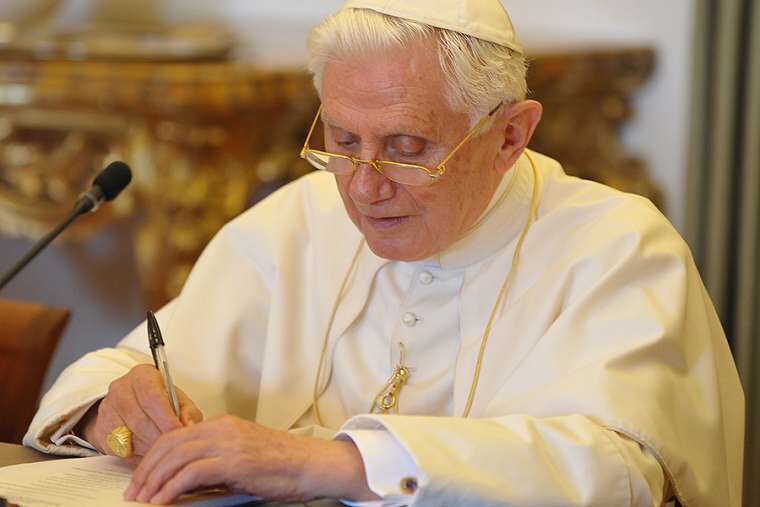