Archbishop Georg Gänswein is pretty much the poster-boy for “gaslighting”. Gaslighting is a tactic used by Diabolical Narcissists and other malefactors in an attempt to silence and discredit those who call them out on their lies and schemes. This is the clinical definition:

“A form of mental abuse in which information is twisted or spun, selectively omitted to favor the abuser, or false information is presented with the intent of making victims doubt their own memory, perception, and sanity…Sociopaths frequently use gaslighting tactics. Sociopaths consistently transgress social mores, break laws, and exploit others, but typically, are also charming and convincing liars who consistently deny wrongdoing. Thus, some who have been victimized by sociopaths may doubt their perceptions.”

Okay. You’ve read my post from a few days ago on Gänswein’s double-down interview with German EWTN one week after his now-infamous watershed speech at the Gregorianum in Rome on 20 May ARSH 2016 outlining in lurid detail the canonical invalidity of Pope Benedict’s failed attempt to partially resign by “bifurcation” of the Petrine Office in which Gänswein 100% confirmed the Greg speech.

Now read Antonio Socci’s ARSH 2014 reportage of Gänswein ALREADY confirming that Pope Benedict retains the external signs of the Papacy because it “corresponds to reality”.

Now, look at Gänswein’s full-throttle gaslighting when asked about this by Diane Montagna of LifeSite News in February ARSH 2019. Look at Gänswein’s contemptuous dismissal of even ASKING about his own CLEAR WORDS as “absurd”.

Folks, gaslighting, like Jedi mind tricks, only work on the weak-minded. The very fact of Gänswein’s clearly mendacious attempts at gaslighting is, in and of itself, informative.

Something is very, very wrong, and Gänswein has revealed himself to be a totally untrustworthy player in this situation. I’ve been saying this for years now. Gänswein is in this treachery up to his eyebrows. Gänswein’s pathetic attempts at gaslighting betrays him as a facile liar at bare minimum.

“I saw the Holy Father surrounded by traitors and in great distress about the Church. He had visions and apparitions in his hour of greatest need. I saw many good pious Bishops; but they were weak and wavering, their cowardice often got the upper hand…Then I saw  darkness spreading around and people no longer seeking the true Church.”

“I see the Holy Father in great anguish. He lives in a palace other than before and he admits only a limited number of friends near him. I fear that the Holy Father will suffer many more trials before he dies. I see that the false Church of darkness is making progress and I see the dreadful influence it has on the people. The Holy Father and the Church are verily in so great a distress that one must implore God night and day…”

“I have been told to pray much for the Church and the Pope…The people must pray earnestly for the extirpation (rooting out) of the dark church.”

“Last night I was taken to Rome where the Holy Father immersed in his sorrow, is still hiding to elude dangerous demands (made upon him). He is still very weak, and exhausted by sorrows, cares and prayers. He can now trust but few people. That is mainly why he is hiding. But he still has with him an aged priest who has much simplicity and godliness. He is his friend and because of his simplicity they did not think it would be worth removing him. But this man receives many graces from God. He sees and notices a great many things which he faithfully reports to the Holy Father. It was required of me to inform him while he was praying, of the traitors and evil doers who were to be found among the high ranking servants living close to him, so that he might be made aware of it.”

Pray for Pope Benedict XVI, the one and only living Roman Pontiff whether he likes it or not, the Papacy, and Holy Mother Church.

Our Lady Undoer of Knots, pray for us. 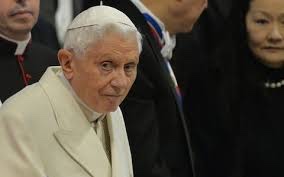