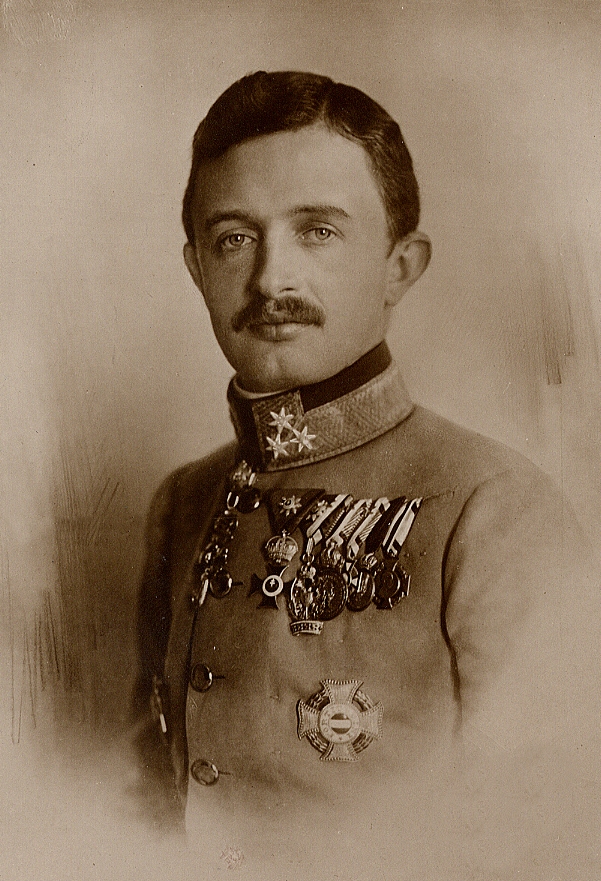 His Imperial and Royal Apostolic Majesty,
Charles the First,
By the Grace of God, Emperor of Austria, Apostolic King of Hungary, of this name the Fourth, King of Bohemia, Dalmatia, Croatia, Slavonia, and Galicia, Lodomeria, and Illyria; King of Jerusalem, Archduke of Austria; Grand Duke of Tuscany and Cracow, Duke of Lorraine and of Salzburg, of Styria, of Carinthia, of Carniola and of the Bukovina; Grand Prince of Transylvania; Margrave of Moravia; Duke of Upper and Lower Silesia, of Modena, Parma, Piacenza and Guastalla, of Auschwitz and Zator, of Teschen, Friuli, Ragusa and Zara; Princely Count of Habsburg and Tyrol, of Kyburg, Gorizia and Gradisca; Prince of Trent and Brixen; Margrave of Upper and Lower Lusatia and in Istria; Count of Hohenems, Feldkirch, Bregenz, Sonnenberg; Lord of Trieste, of Cattaro, and in the Windic March; Grand Voivode of the Voivodeship of Serbia.

Freemasonry exists for the purpose of destroying the One Holy Catholic and Apostolic Church.  The explicit tactic in this, as openly stated by Freemasons is

1.) the destruction of all Monarchies, especially in Europe because European Monarchs were Catholic.  It started with France, and ended in November ARSH 1918 with the abdication of Charles I of Austria, now known as Blessed Karl and German Emperor Wilhelm II. Fascinatingly, Emperor Charles I did NOT abdicate.  He… wait for it… “RENOUNCED PARTICIPATION IN STATE AFFAIRS.”  That has an oddly familiar ring to it, no?

Emperor Wilhelm II of Germany warned the Archbishop of Cologne, Cardinal Felix von Hartmann, of the Freemasonic warplan, and Hartmann wrote a letter on November 8, ARSH 1918 to the Apostolic Nuncio (Vatican Ambassador) to Germany who was, at the time, Archbishop Eugenio Pacelli – who was to become Pope Pius XII in March of ARSH 1939.

His Majesty the Emperor just has let it be known to me that, according to news that came to him yesterday, the Grand Orient [Freemasonic Lodge] has just decided first to depose all Sovereigns – first of all him, the Emperor – then to destroy the Catholic Church, to imprison the pope, etc., and finally to establish on the ruins of the former bourgeois society a world republic under the leadership of American Big Capital….”

Emperor Wilhelm II of Germany abdicated the next day, 9 November ARSH 1918, and Emperor Charles I of Austria “renounced participation in state affairs” two days after that, on 11 November.  Charles I DID NOT ABDICATE.

2.) the attempted destruction of the Papacy is the next necessary Freemasonic step in destroying the institutional Church and establishing a one world government and humanist religion.

Remember the piece posted just below this one in which the “demythologizing” of the Papacy is exposed as a buzzword in the Modernist agenda driven toward dissolving the Petrine Office – which is an Absolute Monarchy directly established by Christ Almighty – and replacing it with a counterfeit “collegial, synodal Petrine Ministry”?

In the piece just below that you will recall, Joseph Ratzinger opens his ARSH 1978 piece, Der Primat des Papstes und die Einheit des Gottesvolkes (The Primacy of the Pope and the unity of the People of God) with this paragraph:

“The topic of the papacy is not one of the popular themes of the post-conciliar era. It had a certain measure of implicitness as long as it corresponded to the monarchy in political space. At the present moment, when the idea of monarchy has practically died out and been replaced by the democratic idea, the doctrine of primacy lacks the frame of reference in our general presuppositions. So it is certainly no coincidence that the First Vatican Council was dominated by the primacy idea, but the Second by the struggle for the concept of collegiality.”

Ratzinger then continued on in the piece to implicitly accept the notion of the “expiry” of the monarchic model of the Papacy.  If you read Miller’s dissertation, you will clearly see that Ratzinger, even as the MOST CONSERVATIVE voice in the bunch, has still fallen for this lie, planted in the German academic zeitgeist by Freemasons decades before, and really dating back to the Lutheran Revolt itself.

Let’s look back now to Pope Leo XIII and his explicit warning of this Freemasonic treachery given in his Encyclical Letter on Freemasonry “Humanus Genus”.  Let’s blockquote paragraph 15:

15. But against the apostolic see and the Roman Pontiff the contention of these enemies has been for a long time directed. The Pontiff was first, for specious reasons, thrust out from the bulwark of his liberty and of his right, the civil princedom; soon, he was unjustly driven into a condition which was unbearable because of the difficulties raised on all sides; and now the time has come when the partisans of the sects openly declare, what in secret among themselves they have for a long time plotted, that the sacred power of the Pontiffs must be abolished, and that the papacy itself, founded by divine right, must be utterly destroyed. If other proofs were wanting, this fact would be sufficiently disclosed by the testimony of men well informed, of whom some at other times, and others again recently, have declared it to be true of the Freemasons that they especially desire to assail the Church with irreconcilable hostility, and that they will never rest until they have destroyed whatever the supreme Pontiffs have established for the sake of religion.

For those of you who have spent the $9 and bought the online version of J. Michael Miller’s doctoral dissertation and read even the tiniest section of it, four words in that pullquote from Pope Leo XIII will have jumped off the page at you.  Those four words: FOUNDED BY DIVINE RIGHT.

Miller’s dissertation is a 300 page discussion of the difference between TWO sets of terms:

These terms are then applied to the concepts of REVERSIBILITY and MUTABILITY, namely, can the Papacy be reversed – that is, TOTALLY ABOLISHED (Kung and Neumann said “yes”, most others, “no”) and can the Papacy be CHANGED, even radically (nearly all cited said “yes”, and not only “yes”, but “yes, and it MUST be changed”).

Which brings us to just yesterday, wherein VaticanNews itself glowingly reported on Antipope Bergoglio’s letter to the “Pontifical Academy for Life” which was pure, unadulterated Freemasonic agitprop.  Understand that Freemasonry is the worship of man (humanism), of man as god-in-the-making.  Humanism is the very name of this wicked false religion.  “Fraternity” and “Equality” are the mantras Freemasons use to advance toward their goal of a tandem one world government and religion.  Now look at Antipope Bergoglio’s remarks, reported and posted on the VaticanNews website under the headline, “Pope (sic) to Academy for Life: Promote Humanism of Fraternity”:

A difficult task for the Church

In response, the Pope (sic) said, the Church is called to react against the negativity that “foments division, indifference, and hostility.” This is a difficult task for the Church, which is in danger of failing to recognize the gravity of the contemporary emergency. “It’s time,” he said, “for a new vision aimed at promoting a humanism of fraternity and solidarity between individuals and peoples.”

In the video below, recorded in October of ARSH 2013, Auntie Blanche McCarrick, serial lifelong sacriligious sodomite predator, says the following:

“About, maybe, just before we went into the general conversations when everybody could talk, a very interesting and influential Italian gentleman came, asked to come to see me, and I said “Sure”, and he came to see me at the seminary, at the American College, where I was staying.  We sat down. This was a very brilliant man.  Very influential man in Rome. And he, we talked about a number of things. He had a favor to ask me from back home in the United States.  But then he said, “What about Bergoglio?” And I was surprised at the question.  I said, “What about him?” He said, “Does he have a chance?” I said, “I don’t think so, cause I, no one’s mentioned his name. He hasn’t been in … I don’t think its on anybody’s mind to vote for him.” He said, “He could do it, you know.” I said, “What could he do?” He said, “He could reform the Church.” He gave him five years, he could put us back on target.  “He’s 76.” He goes, “Yeah, five years.  If he had five years, if the Lord working through Bergoglio in five years could make the Church over again.” I said, “That’s an interesting thing.” He said, “I know you’re his friend.” I said, “I hope I am.” He said, “Talk him up.”

IF I WERE A BETTIN’ GIRL, I WOULD LAY MONEY THAT THIS “VERY INFLUENTIAL MAN IN ROME” WAS THE HEAD OF THE ROME MASONIC LODGE (GRAND ORIENT) AT THE TIME, GUSTAVO RAFFI, OR HIS SUCCESSOR, STEFANO BISI.

Like St. Vincent Ferrer, I think that in these days we should especially enjoin as intercessors Blessed Karl (Charles I of Austria) and his wife Zita, who is now a Servant of God.  They lived being forced out of their rightful monarchical state by the Freemasons, but Blessed Charles, with Zita at his side, stood firm and refused to abdicate.  How can they but be powerful advocates and intercessors in these dark days now that the Freemasonic plot that forced them from their rightful throne has now reached its ultimate target of the Petrine See itself?  Personally, I could kick myself for not making this connection sooner.  Here is a lovely picture of their wedding day.  By all accounts they were truly beautiful people, both inside and out. 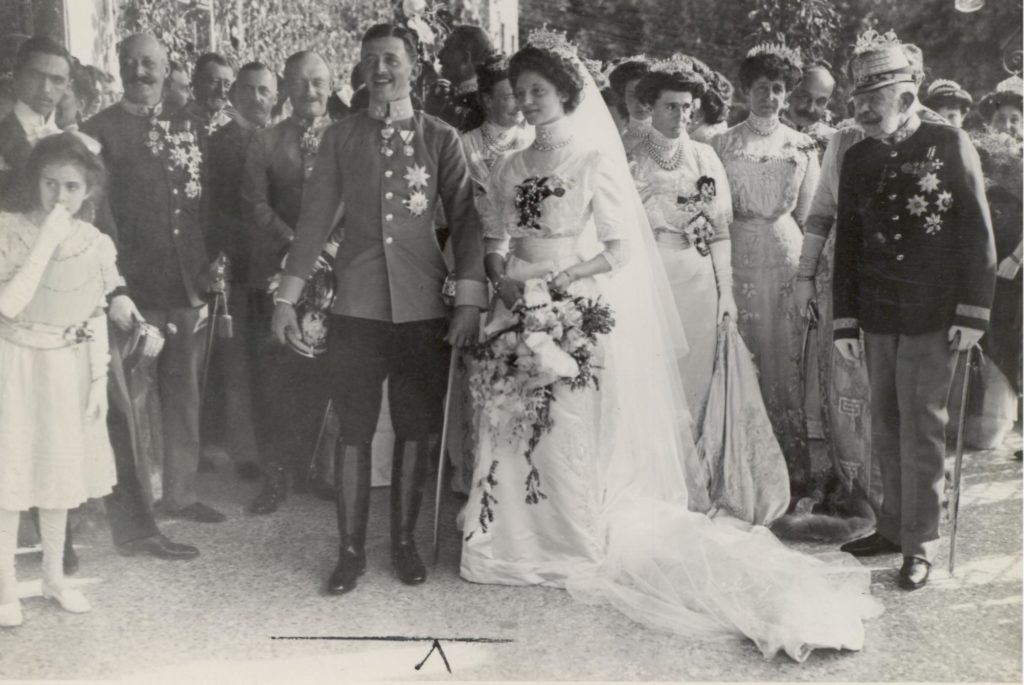