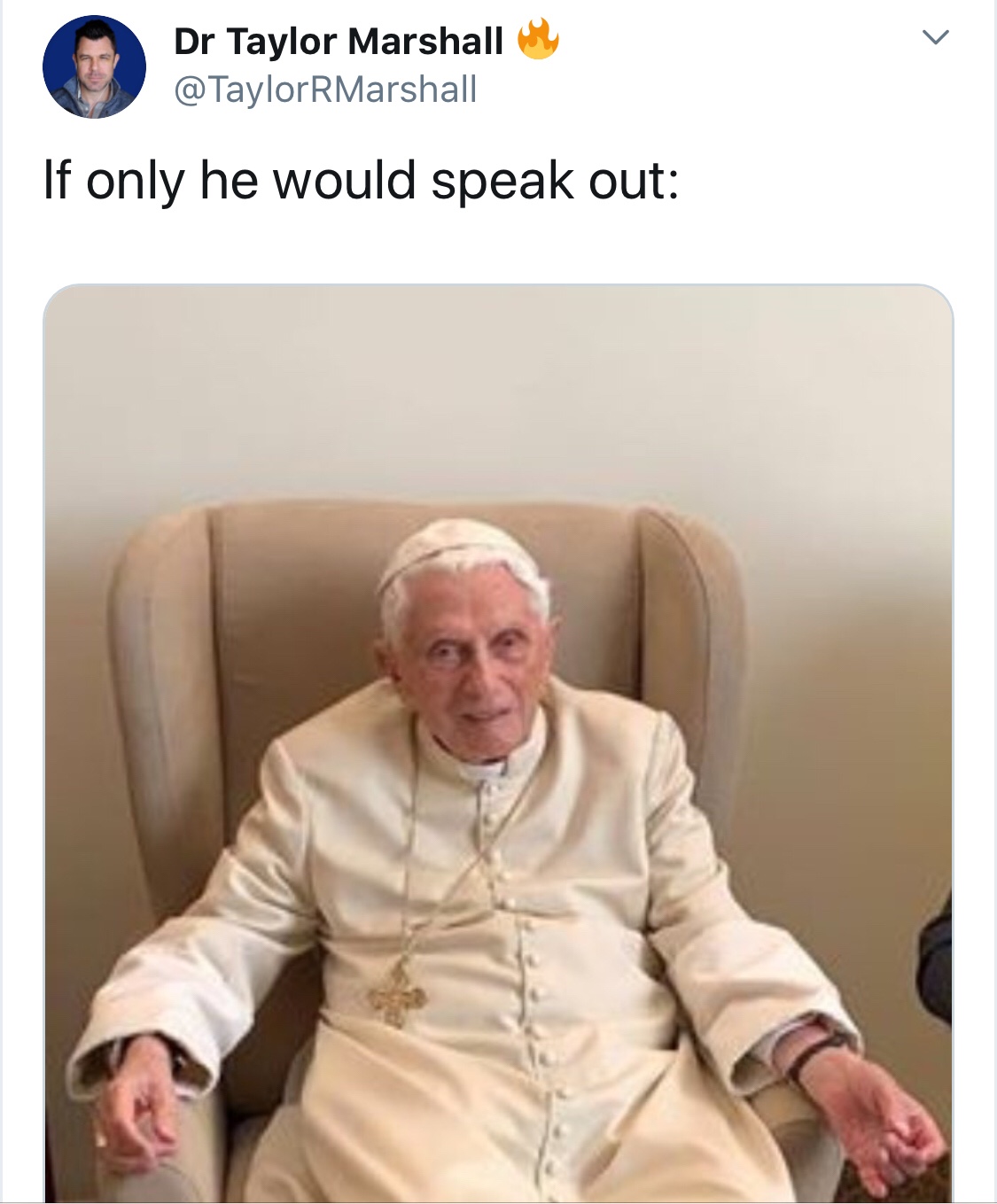 I get the strong sense that Dr. Marshall is… thinking seriously about these issues. I’d love to converse with him face to face. I regret not at least trying recently when I was nearby.

Here’s the thing about Pope Benedict, with some personal insights/relations.

– I cannot hate this man. In fact, given all of my activism against corruption, and my ability to walk away from and denounce people I discover to be thoroughly fraudulent and corrupt over the years, I simply cannot but love the Holy Father, Pope Ratzinger. Even after researching all of his awful academic work in the ’60s, ’70s and forward. This seems to me to be a grace. There is… something demanding my love with regards to him personally. I am certain that it is because he is Peter. It certainly isn’t because he’s German! 🙄

-I have the personal experience of realizing that you are totally surrounded by spectacular moral corruption, and the resulting feelings of (seeming) helplessness. More than once within the past decade, in fact. The second instance being far, far worse than the first. I mean, how surprising is it REALLY to realize that the financial industry is irredeemably corrupt? But when you discover that the whole Anglo-Trad Inc. Catholic Roman Intellectual scene is a big sodomite/sodophile clique…? I can only imagine what Pope Ratzinger, knowing what he knew both as head of the CDF, and then as Pope, of the financial, sodomitical, and satanic infiltration of the Church, and the UBIQUITOUSNESS of it especially, must have felt, and still feels. I can not just imagine, but mildly relate.

-++Pell is sitting in prison, convicted of crimes that he was indicted for that it is physically impossible for him to have committed. +Viganò is in hiding for fear of his life. Fr. Vaughn Treco is “excommunicated”. Fr. Paul Kalchik is still in hiding. And, not in a totally unrelated vein, Jeffrey Epstein didn’t kill himself.

-Pope Benedict was and is almost certainly threatened with “schisming the Church”. Can you even begin to imagine the pressure of being told, “Either you let us schism the Church, or we will schism the Church and falsely blame it on you personally – and everyone will believe us”?

-Pope Benedict doesn’t realize the power he possesses as Peter, the Absolute Monarch of not only the Vatican City State, but the entire physical universe, with Supernatural negative protection. He lacks faith in Our Lord’s promises to Peter and his successors, having himself (Ratzinger) been scandalized (loss of faith) by being surrounded by sickening sodomites, heretics and infiltrators for his entire adult life. Also, from being German.

-His minder/warden, Georg Ganswein, is to be trusted as far as he can be thrown by his eyebrows.

-The pathological need to publicly HATE and DESPISE Pope Benedict, Christ’s Vicar on Earth, and by extension to hate and tear down the Petrine Office in toto (EXACTLY like the Freemasonic agenda…hmmm), as ratification of personal “daddy” and abandonment issues is transparent and pathetic to put it mildly. Aw, your baby boomer parents were divorced and sub-optimal? Get in line, toots. That excuses NOTHING. And instead of trying to make it into some sort of justification for your narcissistic train wreck life, MOVE ON and leave the Papacy out of your psychopathologies.

-If I could meet Pope Benedict and only say one sentence to him, it would be, “You are still the one and only living Pope because your resignation was canonically invalid, and I love you Holy Father Benedict, Peter, Joseph.”

If THAT makes me a stupid, crazy, ugly, schismatic, then, I throw myself upon Our Lord’s infinite mercy. My guilt is in believing Our Lord’s promises exactly as the Church has for 2000 years, and loving His Vicar, warts, substantial error, and all.