An eagle-eyed reader has pointed out this quote from the opening of the “Pachamama Ritual at Home” instruction page linked in the post below:

“You should never miss something red, it is the favorite color of the Pacha(mama)!”

Right away, correspondents were emailing me saying how UGLY the potted plant was.  Let’s take another look:

Multiple species that look like weeds – but note well the two small red flowers, stuck into either side of the “arrangement”.

Another eagle-eyed reader pointed out that the woman immediately ahead of the witch presenting the Pachamama dragon demon plant to Antipope Bergoglio is wearing the black liberation theology “tucum ring”.

Do you know who that woman is?  That is Vatican “spokeswoman” Cristiane Murray whom Ed Pentin exposed last week as being not only a CO-FOUNDER of the satanic Ford Foundation proxy organization REPAM, which funded and organized this “Amazon Synod”, but also has a French Communist Party poster hanging above her desk in her Vatican Radio office. 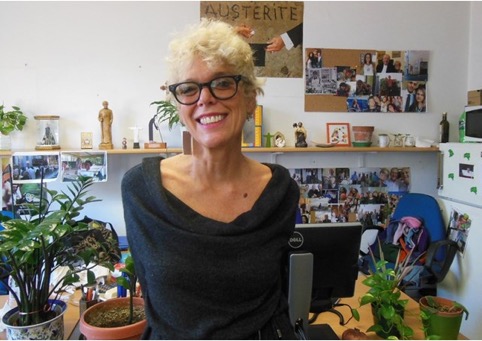