Before Mass yesterday, I read the Mass of the Feast of the Nativity of the Blessed Virgin, which is fixed on September 8, but as a Second Class feast didn’t trump the Sunday (Thirteenth Sunday after Pentecost).  But, the Nativity of the BVM was commemorated, and the Collect, Secret and Postcommunion added.

What struck me most was the little instructional blurb in the missal.  It began thusly:

“At the time of Mary’s birth the whole world was plunged in darkness.  The heathen nations were steeped in vice and pride.  The Jews, beloved of God, had strayed from Him.  Everywhere there was sin and gloom, no bright spot on the face of the earth.  But when Mary was born a light arose amid the darkness: the dawn of a glorious day that was to usher in the Redeemer.”

I receive emails from folks who are clearly being scandalized by the Trad Inc. despair merchants, who are seeing the slip-sliding down the slope of apostasy into the sucking maw of damnation with the loud demands that others agree with them and join them.

Nothing is going to happen. God isn’t going to intervene.  You’re an infant if you think there is any way out of this.  We’ve been all wrong about LOTS of things, first and foremost the Papacy.  Thank God for Francis showing us how wrong we’ve been for the past 2000 years about the Papacy, the Church, and about God Himself, and His so-called “promises”.

I look at this poisonous rhetoric and think to myself, “Have these people never actually read the Bible?” Can these people not see that they are engaging in exactly the same faithlessness as the Jews who rejected Christ because he wasn’t at the head of an early army come to expel the Romans?  Exactly like the Jews in the desert who after being led out of Egypt via the greatest physical miracle yet seen (the parting of the Red Sea), and then led through the desert by the Pillar of Cloud by day and Flame by night, miraculously fed with the Bisquick from Heaven, couldn’t make that golden calf fast enough as soon as Moses disappeared up the mountain?

The Blessed Virgin was born approximately thirteen to sixteen years before the Incarnation.  And before that, the incomprehensible workings of the Divine Providence laid out the entire First Act of Salvation History – ALL WHILE FULLY RESPECTING THE FREE WILL OF EVERY HUMAN BEING.  It isn’t just that Divine Providence does what He does in isolation.  The absolute jaw-dropper is that the Divine Providence does what He does WHILE RESPECTING THE FREE WILL OF MAN.  And we see it on every single page of Scripture.  God manifests in BOTH Omnipotence AND Love working in perfect harmony to bring about whatever He wants, how He wants it, when He wants it, but never encroaching upon man’s free will as a rational intellect, made by God in His image and likeness.

I view these dark days as similar to those thirteen to sixteen years wherein the Blessed Virgin was already born, and the wheels very, very, very much in motion, but totally hidden.   Remember, the Blessed Virgin, like all women, was born with every egg in her ovaries fully formed, which means, of course, that the egg that would be miraculously fertilized by the Holy Ghost was already on earth for sixteen years before the Annunciation and Incarnation occurred, waiting in hidden silence for consummation.

We keep fighting the infiltrators, we keep sounding the warning and alerting people to the Bergoglian Antipapacy, we keep explaining that which is visible and explainable – which a shocking amount is.  We do this because TRUTH is the best weapon against scandal.  EXPLAIN what is going on, even if it is absolutely horrific, and once people understand and have an accurate view of the battle space, not only will they NOT be scandalized, they will be EDIFIED and want to JOIN THE CHURCH MILITANT and JOIN THE FIGHT.

Steer well clear of anyone who peddles in these truly toxic spiritual commodities.

Infant Mary, pray for us, for Pope Benedict, the Papacy and Holy Mother Church! 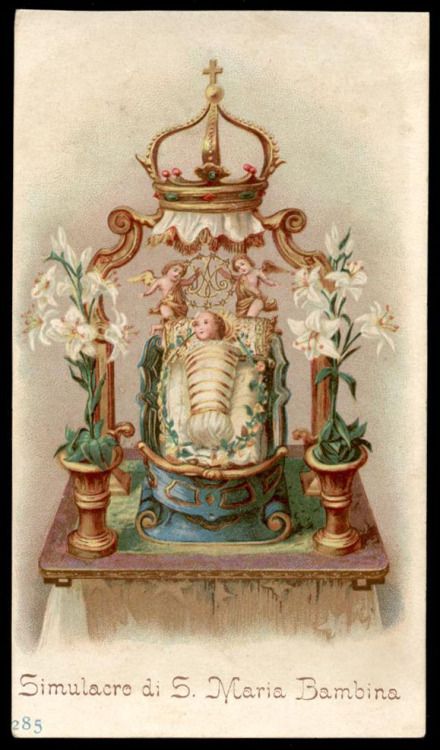