This is George Neumayr’s video of the sodomite child predator priest (now laicized), Fr. Matthew Riedlinger.  Riedlinger was a sodomy partner of Msgr. Walter Rossi, the rector of the Basilica of the Immaculate conception in Washington D.C., and thus 100% in the Wuerl-McCarrick gay mafia.  Rossi pimped male Catholic University students to Riedlinger for sodomy, and Riedlinger was transferred and ordained by the Rossi-Wuerl-McCarrick mafia after being expelled from seminary in Ohio for being a flagrant sodomite.  You can read Neumayr’s reportage here.

A few notes on this video.

First, what does a sodomite look like?  What does a sodomite child sex predator look like?  As you watch this video, note that Rieldlinger doesn’t come off as a raging fag.  In his job as a furniture salesman, he isn’t piling on the fag affectation.  He is dressed conservatively.  I wouldn’t pick him out instantly as a sacrilegious predator of teen boys. I’ve seen this many, many times: faggots turning the affectation on and off like a switch depending on the “audience”. You can bet that Riedlinger is as camp as a row of tents when he is with his fags.

The truth is, if you want to see what a sex pervert looks like, go look in the mirror.  Because sexual perversion is a freely chosen pathology derived from Diabolical Narcissism, that is, the willful, consciously chosen self-purgation of love from the soul, EVERY HUMAN BEING has the capacity to fall into it. Every human being has the POTENTIAL to fall not just into sin, but horrific, horrific sin, like Riedlinger.  The parabolic increase in sexual perversion, due in many cases to the use of p**nography, is a testimony to this. Once a person chooses to be a DN and to not love, the downward spiral is potentially unlimited.  Hence men who 20 years ago were 100% straight, now end up addicted to homosexual and child p**n.

Note how Riedlinger CANNOT BEAR any mention of the Blessed Virgin.

But here is what hit me the hardest.  Neumayr and the couple with him did a great job in using Neumayer’s phone as a decoy, when the real recording phone was in the purse of the lady.  Because it was down in her purse, the shot angles were largely uncontrollable and somewhat random.  But as you watch the video, Riedlinger’s HANDS keep coming into frame.  As I watched it, I was overwhelmed with the thought of those hands – hands which are consecrated, and which held Our Blessed Lord as He came down upon the altar AT RIEDLINGER’S CALL.

Read this moving citation from Anne Catherine Emmerich about the hands of a priest:

“…And of the priest’s consecrated fingers [Blessed Anne Catherine Emmerich] says that were his body fallen to dust and his soul in Hell, yet will the consecration still be recognized in the bones of the fingers; they will burn with an altogether peculiar fire, so ineffaceable is the mark.”

How sad and terrifying is the sight of Riedlinger, and the thought of his potential fate.

And yet how achingly beautiful is the thought that Our Lord loves His flock so much, that He allowed Himself to be handled by such a monster as Fr. Riedlinger; that He willingly answered Fr. Riedlinger’s summons and not only Transubstantiated the Host and Chalice in Fr. Riedlinger’s hands, but also allowed Himself to be immolated by Riedlinger’s sacrilegious consumption of His Body, Blood, Soul and Divinity – SO THAT THE FAITHFUL COULD BE ASSURED THAT OUR LORD WAS, INDEED, PRESENT UPON THE ALTAR, AND REPOSED IN THE TABERNACLE, and because it is necessary for the priest to consume the Host and Chalice in order for the Holy Sacrifice to be completed, no matter what.

As we continue with the Novena to the Virgin of Revelation, Mother of the Pure Clergy, please dedicate a few minutes to Our Lord’s infinite, infinite love for us by thinking about Riedlinger’s hands.  Let the horror of Riedlinger’s sacrilege be a means of increasing your understanding of Our Lord’s simply incomprehensible love for you and for all of us, and of the lengths He will go to, and the humiliation He will withstand – for LOVE.

And where sin abounded, grace did more abound.
Romans 5: 20 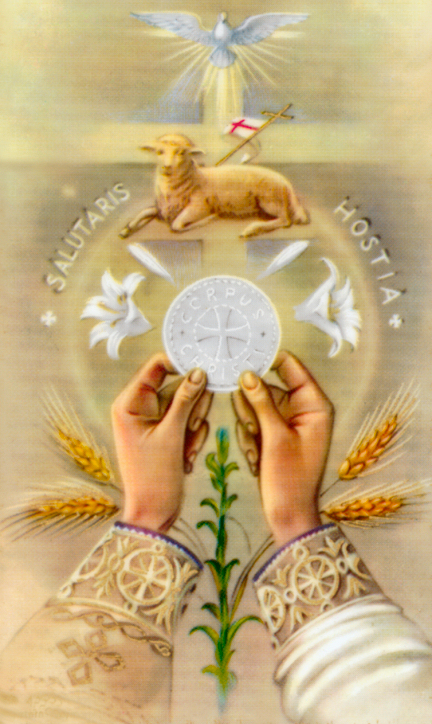