Dr. Peter Kwasniewski has, apparently, come on-side.  I am not surprised in the least.  Dr. Kwasniewski is a genuinely GOOD MAN.  He is a husband and father, and one of the most charitable people I have ever met (he never says a bad word about ANYONE – something I wish I could claim of myself, but cannot).

I have met Dr. Kwasniewski twice over the years, and found him to be completely sincere, and detected not a WHIFF of elitism nor “liturgical fetishism” in him.  Dr. Kwasniewski is a married man with children, so, let the reader understand the point being made.  Both times that I saw him speak, years ago, it was obvious that he had what I often refer to as “a personal relationship with Jesus Christ”.  He loves Our Lord and His Holy Church, and the Liturgies of The Church (Mass/Divine Liturgy, Divine Office) because he loves Our Lord.  Full stop.

Given this, it is not surprising that Dr. Kwasniewski would, after reading the English translation of Antonio Socci’s book, “The Secret of Benedict XVI: Is He Still the Pope?”, published just a few days ago, instantly recognize the TRUTH, and be attracted to it, because, after all, the Truth is a Person, Our Lord and Savior Jesus Christ.  When you love Someone, you recognize Him when you see Him, and you go to Him, no matter what the earthly consequences.

I reprint here, in full, Dr. Kwasniewski’s Amazon.com review of Antonio Socci’s book “The Secret of Benedict XVI: Is He Still the Pope?”

Pray for Dr. Kwasniewski, as he will no doubt receive all kinds of blow-back over this.

Folks, the “Trad, Inc.” people who have launched a calumny campaign against me, admittedly being a person who has made myself a target over the years with the force of my rhetoric and willingness to do what the Prayer After Confession says and “avoid all evil company”, DARE NOT say ONE WORD against Dr. Kwasniewski.  If they do, may God Almighty verily have mercy on them, because that would be going just about as low as one could possibly go.

(FIVE OUT OF FIVE STARS)

Ever been troubled by what looks like two Popes at the Vatican?

I read this book expecting to be a little skeptical of an author who would argue that Benedict XVI did not validly resign the papacy. After all, it sure looked as if he intended to do that in his famous speech of abdication, and the world seems to have accepted it as such.

Socci, however, persuaded me otherwise with his careful analysis of Benedict’s XVI’s various utterances on the subject (and there are a surprising number of them!), Archbishop Gaenswein’s speeches, and, above all, the interpretations of canon lawyers — none of them traditionalists, by the way — who have proved in detail that the resignation lacks several conditions for validity. The argument is not based on the St. Gallen Mafia, but on the inherent actions and statements of Benedict XVI and others, all publicly available. In other words, this is no “conspiracy theory” but a soberly argued case. Even those who think they have a watertight case in favor of validity should, out of intellectual honesty, grapple with what Socci presents here. If they can defeat his arguments, all the better for the defense of truth. If they cannot or will not, however, this would seem to indicate a moral or mental weakness.

That is not the only aspect of this book I would praise. I also find much food for thought and prayer in Socci’s speculations about the prophetic message of Fatima and his spiritual-theological interpretation of the unprecedented situation in the Catholic Church. While I find his interpretation of Benedict XVI’s motivations overly positive, I think the way he tries to place current events in a prophetic and specifically Marian context is extremely helpful. 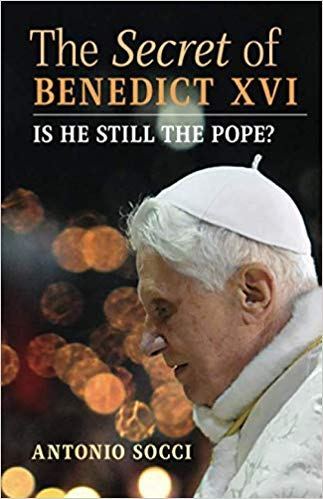