How incredibly, incredibly sad.  And chilling.  It is simply horrible to watch other people self-harm like this, much less the damage being done to souls, and to Our Lord and His Church, already under such unspeakable attack.  I think this DEFINITELY warrants a call to priests to offer the Holy and August Sacrifice of the Mass for Dr. Taylor Marshall. 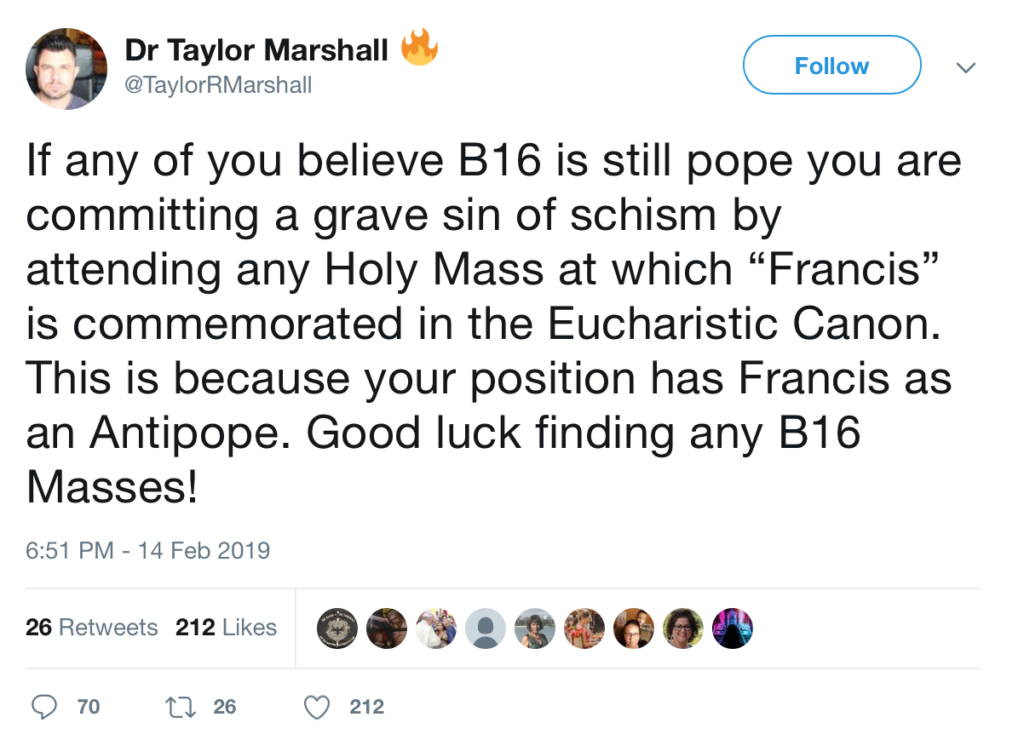 Now I want you to just stop and think about this.  Do you HONESTLY believe that ANYONE telling you to STOP GOING TO MASS can possibly, possibly be of the Holy Ghost? Do you honestly believe that Jesus Christ actively wills you to break the THIRD COMMANDMENT?

Not that anyone is excommunicated, but purely to drive home the point of how wicked and uncharitable the Tweet of Dr. Marshall’s is, did you know that even people who have been formally excommunicated are still 100% bound by the Third Commandment to assist at Mass and fulfill their Sunday Obligation and all Holy Days of Obligation? If a formally excommunicated person does not hear Mass on Sunday, that is another mortal sin added to their tally. An excommunicated cannot receive Holy Communion, obviously, but he is still obliged, and Holy Mother Church earnestly desires that he COME TO MASS precisely because the Mass is the intersection of Heaven and Earth, with infinite quantities of grace available to every soul there present.

EVERYONE should go to Mass.  The only kind of Mass that one should absolutely not assist at is an INVALID Mass, which is actually then no Mass at all, but an aping of the Mass.  Even if a given Mass is illicit, which almost every Novus Ordo Mass is by definition, since the Novus Ordo was conceived in malice by enemies of God and His Holy Church (with parts of the Canon literally composed on the back of a napkin in a restaurant in the Trastevere district of Rome) if a Novus Ordo Mass is all that is available, one not only SHOULD assist at it, but MUST hear it to fulfill the Sunday and Holy Days of Obligation.

Why?  Why is EVERYONE bound to hear Mass, even if it is illicit, up to and including those who have been formally excommunicated?

BECAUSE THE MASS IS CALVARY.

Because the Mass, even an illicit Mass, so long as it is VALID, effects the warping of space and time itself such that the once-for-all event of Calvary, these almost 1989 years ago (+/-) is made ACTUALLY PRESENT upon the Altar right in front of you. You ARE there.

Why did Christ do this?  Because He loves you so much that He wants you there with Him as He dies in agony for your sins, because YOUR presence is a consolation to HIM, which is a truth that is so incomprehensible in its infinite goodness and purity of its gratuitous love that it should make us all melt with joy while simultaneously buckling us over in fear and humility.  Remember, Christ Jesus would go through His entire Passion and Death JUST FOR YOU AND YOU ALONE, and even more incomprehensibly, He would do it AS MANY TIMES AS YOU GO TO MASS IN YOUR LIFE.  Given this, does it sound right to you that it is in any way possible that God would ever, ever NOT want you to hear a VALID Mass?  Can any such whispers in your ear possibly have their origin from the Holy Ghost?  Of course not.  It is the objective of satan to try to convince people to not attend Mass.  Especially now.

Consider also who is also present at the Foot of the Cross at every Mass: The Blessed Virgin, and St. John, who as “The Disciple that Jesus Loved” is the proxy for YOU.  Jesus loves you infinitely.  YOU are the Disciple that He Loves.  Do you honestly believe that He would ever tell you to NOT come to the Foot of the Cross – ever?  No – only The Liar would dare suggest such a thing.  Do you honestly believe that Jesus Christ would ever actively will that you NOT stay close to His Mother, that you LEAVE HER SIDE, knowing that He specifically gave her to you as YOUR OWN MOTHER?

SuperNerd put it very beautifully in one of the Podcasts – I can’t remember which – that Jesus Christ is present at every VALID Mass, but at some Masses His Presence is more apparent to us in the remnant Church Militant as in Triumph, Enthroned as the King of All that He is.  At other Masses, Masses that are illicit for whatever reason, including Masses in which an Antipope is commemorated, His Presence is more apparent to the remnant Church Militant as in His Agony, Passion and Crucifixion.  Are we to think that we should only deign to hear Masses in which His Presence is more apparent as in Triumph, and that we should haughtily shun those Masses in which He seems to us to be shackled to the Pillar, or nailed to the Cross?  Or perhaps, when we assist at a Mass in which something illicit is done, we should comfort Our Lord, make prayers of reparation, take on penances voluntarily, and even pray for Him to give us the strength and virtue to do what He wants us to do in order to help make the illicit actions stop.  Remember, the most horrific Holy Sacrifice of the Mass ever celebrated WAS CALVARY ITSELF in ARSH 30.

The FIRST inquiry I made in June of ARSH 2016 was of a very, very solid and internationally respected priest. I asked him if it is appropriate and not hypocritical for me to receive Holy Communion at a Mass in which I knew that a man I was morally certain was an Antipope (“Francis”) was commemorated.  My question was about receiving Holy Communion – because it was a complete no-brainer that HEARING a Valid Mass could never be wrong.  He assured me instantly and with complete certainty that YES, you may receive without hypocrisy and certainly without sin in se.

In these dark days, the truly humble prayer is, “Lord Jesus, if I am wrong, correct me immediately, because all I desire is the Truth, because the Truth is You.  If I am right, confirm me, strengthen me, and suffer not my foot to be moved. (Psalm 120)  And never, ever let me be separated from You in the Holy Mass.”

Go to Mass, and never let anyone tell you that you have no place at the Foot of the Cross.  Pray. Pray the Second Joyful Mystery of the Rosary – the Visitation, whose fruit is an increase in FRATERNAL CHARITY, that is, love of neighbor.  Pray that the Truth be fully revealed, and pray especially that anyone and everyone who is being deceived be corrected, and humbly receive that correction.

Most people today, sadly, are just casually going along with the herd in terms of Antipope Bergoglio.  Others are terrified of speaking out against him and having their careers, donation revenues or worldly reputations reduced or ruined, or their order or community destroyed.  Others are too weak to engage the dataset, and prefer to live in an effeminate, blissful ignorance.  Only a relative few are actively malevolent.  Pray for priests and religious, and do whatever your state in life and your specific gifts allow to be of service to the Truth.  Go to confession.  Fast. Pray for sinners.  Pray for the excommunicates (public and latae sententiae), that they might receive graces while hearing Mass, even though they cannot/should not receive Holy Communion.