Cardinal Walter Kasper is sweating like a crocodile in a purse factory, folks.  He should be.  The Bergoglian Antipapacy, a Walter Kasper Production, is hurtling towards its end.

Did you see Maike Hickson’s reportage at LifeSiteNews that Kasper is now saying that a “forced resignation” of Bergoglio would be invalid?  The unmitigated gall of these people….

First, to review, Antipope Bergoglio holds no juridical office to resign from.  As we have discussed many times before in this space, “Antipope” is NOT an office, it is a CRIMINAL STATUS.  Antipope Bergoglio can’t “resign” the Antipapacy any more than O.J. can resign from being a murderer.

Second, anyone with two brain cells to rub together can see that Pope Benedict was under pressure to “quit”.  The Sankt Gallen Mafia, led by Cardinal Carlo Martini, told Pope Benedict in ARSH 2012 that his “time was up”.  Martini died on August 31, ARSH 2012 and Walter Kasper became the head of the Sankt Gallen Group.  Not long after on December 31, the Vatican was cut off from processing credit card transactions, a block which was **miraculously** lifted on February 12, the day after Pope Benedict announced his attempted partial faux-resignation.

Back to Cardinal Walter Kasper, across the transom came this little jewel, Kasper’s book on the glories and wonders of Luther.  Folks, you don’t even need to read the book.  Just read the blurb on the back cover:

There are few historical figures in memory even after 500 years, friend or foe, who were as influential as Martin Luther. In the course of 500 years Martin Luther was viewed in many different ways: Luther as a reformer, Luther as a church father of Protestantism, Luther as a champion of reason and freedom, Luther as a brave German national hero, and many other images assigned to Luther. For Catholics, Luther has long been one of the heretics par excellence, and responsible for the split of the Western Church and its consequences-at least up until today. This thinking is now over. The Catholic Luther research in the twentieth century brought a significant shift in understanding Luther. Luther is now recognized for his insights and there is a more equitable judgment on the schism. There is now more of an understanding and ecumenical spirit. Cardinal Walter Kasper carefully presents these themes in his latest work, explores his understanding of Martin Luther and his contributions that could not be imagined 500 years ago, but are now in the forefront of a new ecumenical spirit. Various chapters in this book speak of the end of the confessional age, Luther in the spirit on modern times, ecumenical discovery of catholicity, and an ecumenism of charity. 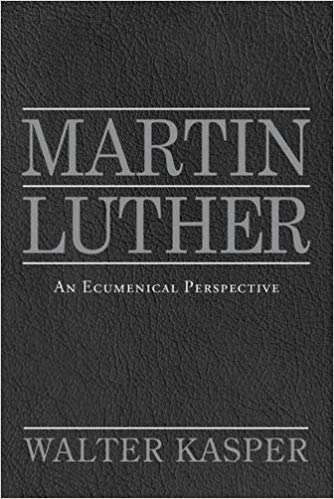 Antipope Bergoglio sounds like a Lutheran because he is parroting what his puppetmaster, Kasper, tells him to say.  Kasper is a Lutheran.  If you read J. Michael Miller’s dissertation, you will understand what the agenda is and has been for over 50 years among the Germans: dissolve the Papacy by “fundamentally transforming” the papacy into a “collegial, synodal shared Petrine ministry”, Lutheranize everything. And as a bonus, get a cut of that sweet, sweet Lutheran Kirchensteuer money.  The Freemasons giggle with glee, and satan squeals with delight.

Just for fun and review, here is a small collection of quotes from Luther.  The man was a psychopath demoniac pervert.  Full stop.