Hello Ann;
I have been a big fan and consumer of your words and podcasts for some time.
I thought you might find interesting the fact that my daughter is a religious- a sister of the Little Sisters of the Poor (yes, the very ones that have been dragged into court to not have to abide by the HHS mandate). She entered nearly ten years ago (at the age of 21), and took her permanent vows about two years ago in La Tour , France. My wife and I were there to witness it.
The point of all of this is that when she was trying to settle on an order to join all those years ago, she was drawn eventually to the Little Sisters because of the traditional habits and the orthodoxy (no coincidence, I’m sure) they espoused.
She was generally turned off by the attitude of the ‘modern’ sisters she encountered in those orders she approached that had eschewed the traditional habits for the ‘business casual’ attire- if pant suits fit that description. Sadly, although my daughter was much more charitable in her description, they sounded much like the ‘women’ you describe in the beginning of your article.
Hope you will find this brief story vindicating.
By the way, she is very happy in her vocation of choice; she serves the indigent elderly in her care with the dignity and cheer they deserve, and is perhaps the happiest most fulfilled-acting ‘millennial’ I know. Praise be to God.
Best regards, and God Bless,
Proud Papa 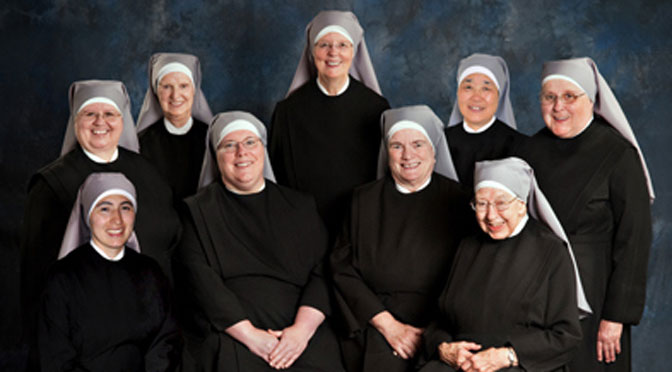 This is what the Little Sisters of the Poor look like.  Notice how FEMININE they look.  From the youngest one in the lower-left who could be your daughter or sister, to the elderly sister on the lower-right, who looks like your grandma or great aunt.  Just because none of these ladies, if dressed in civilian clothes, would ever be on the cover of a worldly fashion magazine doesn’t mean that they aren’t feminine.  Really, what we are saying here is that these women are NORMAL.  And HAPPY!  I personally haven’t had much contact with Traditional nuns, but what I hear across the board from people who do is that Trad nuns are some of the happiest women on the planet.  They radiate not just contentment, but active JOY.  I did eat Chinese food years ago in a big group with Mother Cecilia (Now Abess Cecilia) of the Benedictines of Gower, Missouri, and the whole table laughed riotously throughout the meal.  I barely got through my Curry Duck.  Everyone who went to their recent consecration of the Church and elevation of Mother Cecilia to Abess reported that the whole thing was one of the most contagiously JOYFUL things that have ever experienced.
—-With regard to habited Novus Ordo nuns like the Little Sisters shown and referenced above, I dare say that when the Novus Ordo is ABROGATED, and folks, I think that glorious day is coming sooner than any of us suspect, these habited nuns will take to the Old Mass like fish to water.  Thirty minutes of instruction in how to use a hand missal, and ONE WEEK of daily Mass, and that will be all it takes. Trust me.
Now, to email #2…

Well, that photo was a bit of a surprise. That’s our family’s home parish — and we were at that Mass. Sigh.

The average age of those “religious” might arguably be skewed because they were there to commemorate significant anniversaries — 40 years, 50 years, 60 years, that sort of thing. Doesn’t take away from your point, though. Of the dozens of them there, I think I saw exactly ONE in a traditional habit — exactly ONE woman in the group who looked like a Catholic nun, instead of… well you put it well enough.
I remember looking across at them thinking, “Yikes.” I hope the children don’t notice. (Lovely, isn’t it, how one has to consider the possibility of scandal while being present at the Holy Sacrifice of the Mass.)
Signed,
New York State of Mind

Yep.  What this parent keyed in on is a very important concept: SCANDAL.  This person’s children are all old enough to be scared/confused/scandalized by essentially cross-dressing “nuns”.  These witch nuns started cross-dressing openly in the 1970s.  Think about it.  Lesbian nuns were the first “camel’s nose under the tent” in the toleration and then acceptance and ratification of the mortal sin and capital crime against the Divine Law, transvestitism.  “Sister” Terry was the direct antecedent to Bruce Jenner.
The parent who took their children to the Mass that I pictured in my piece was literally scared that their children would be DAMAGED AND FRIGHTENED by the very sight of these women.  At the Holy Sacrifice of the Mass!!
I remember well as a child being around nuns and ex-nuns of the Sisters of Charity of Leavenworth whom I COULD NOT TELL BY LOOKING AT THEM whether they were male or female.  As a child, I remember being repulsed by these women, and mildly frightened, even though the knowledge of the existence of the sins of sodom were still years in front of me.  Sodomites do harm not just by physically molesting or raping – they do harm by the very scandal of their comportment.  This is why you MUST MUST MUST keep your children away from their “gay uncle” or their “dyke aunt”.  The very toleration of their presence QUA sex perverts is a CLEAR AND PRESENT DANGER to the immortal souls of your children.
Further, consider how many people in the 1970’s, 80’s and early 90’s were confirmed and ratified in mortal sin by these witches, who were frequently charged with marriage prep courses and thus told countless thousands if not millions of couples to contracept without any hesitation.  I have received over the years now countless emails from both men and women who were specifically told by priests and nuns that “Rome is wrong” about contraception, and thus thwarted the existence of their own children that God wanted to lavish upon them, but they, in a sense, exterminated, and that they now grievously mourn.
Further consider how many people were either totally malformed, or were driven out in revulsion – an undeniable sense that “something is VERY wrong here” – by these witch nuns who were tasked with running so many RCIA programs.
Finally, as the seminal book “Goodbye, Good Men” documents, it was PRECISELY these lesbian witch nuns that stood as gatekeepers of most of the seminaries in the 70’s, 80’s and 90’s, and still do hold sway in many Novus Ordo seminaries, and ACTIVELY rejected and ejected men who were heterosexual, orthodox, believing Catholics from the seminaries.  They would ask applicants and seminarians their opinions on female ordination and sexual perversion, and if the the answer didn’t come back from the young man squarely in favor of “female ordination” especially, the young man would never make it in the door, or if he did make it in, would be tossed for being “rigid” or for being patriarchal or misogynistic.  Oh, yes.  The lesbian witch nuns worked hand-in-glove with the faggot mafia to turn seminaries and the priesthood into a massive sodomitical mafia.
Remember folks, when we don’t speak up and call this stuff out, it isn’t just ourselves we are hurting.  Consider the other people around you that COULD be saved from a life of sin, or from being scandalized out of the Church if just ONE PERSON had stood up and said, “Excuse me, “Sister” Terry, but your butch lesbian aesthetic, which you are CLEARLY going out of your way to project, is a mortal sin, a crime against the Natural and Divine Law, and is completely intolerable.  I will not stand for even the slightest hint of sexual perversion nor heresy, and thus I demand that you leave this gathering IMMEDIATELY.”
REMEMBER:
9 Ways to participate in the sins of others:

1.1. By counsel (to give advice, one’s opinion or instructions.)

1.8. By silence (by playing dumb, by remaining quiet.)

Note: To participate in the sins of another person means that one is just as guilty of the sin as the one who committed them. For example, if you encourage someone to have an abortion, you are guilty of the sin of abortion.  If you remain quiet about transvestitism, or the teaching of heresy….
Bruce Jenner is a man. And furthermore I consider that islam must be destroyed.