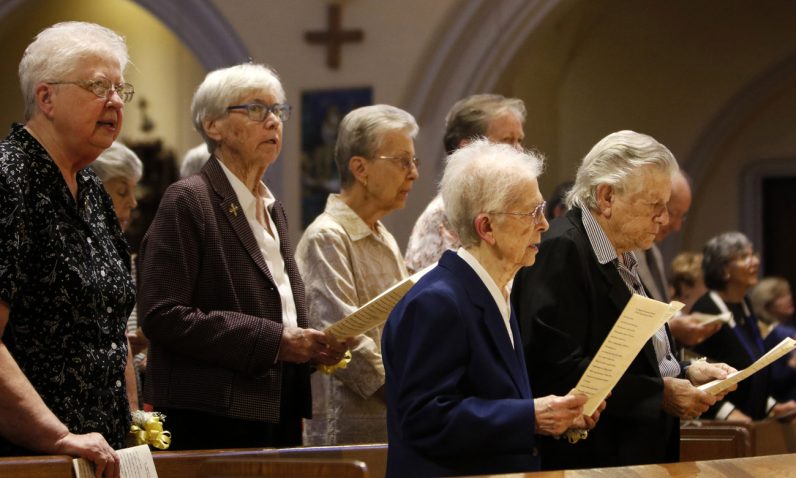 Look at these women.

I think there has been an unspoken prohibition against speaking about this, because these “nuns” and “sisters” are still, to this day, riding the coattails of nuns and sisters from before the Asteroid, enjoying the deference rightly given to women who chose to be espoused to Christ, and lived lives of prayer and service.

That is not what these dyke witches are.  These are arch-heretics and many of them are full-blown apostates, so mired in their sexual perversion that they hate Our Lord because He incarnated as a man.  These hideous, repellant train wrecks tout the need to “move BEYOND Jesus” into their neo-pagan religion, which has nothing – NOTHING – to do with Catholicism.  Just read this piece, the introduction to which I will blockquote:

It may take time, but it’s hard for a Catholic educator to publicly praise the work of nuns who have bravely leapt “beyond Jesus” without drawing some flack – especially in the Internet age. During this era of crisis and decline, some Catholic religious orders have chosen to enter a time of “sojourning” that involves “moving beyond the church, even beyond Jesus,” Sinsinawa Dominican Sister Laurie Brink told a 2007 national gathering of the Leadership Conference of Women Religious.

“Religious titles, institutional limitations, ecclesiastical authorities no longer fit this congregation, which in most respects is Post-Christian,” added Brink, a former journalist who is a biblical studies professor at Chicago’s Catholic Theological Union. For these women, the “Jesus narrative is not the only or the most important narrative. … They still hold up and reverence the values of the Gospel, but they also recognize that these same values are not solely the property of Christianity. Buddhism, Native American spirituality, Judaism, Islam and others hold similar tenets for right behavior within the community, right relationship with the earth and right relationship with the Divine.”

They cut their hair like men, wear clothes like men, comport and carry themselves like men, all the while condemning the very masculinity that they so pathetically ape.  It is a species of self-mutilation, certainly more subtle than what we are seeing today in terms of people literally cutting themselves to shreds in order to masquerade as the opposite sex, but rest assured that these psychos would have gone full “trans” had the technology and culture permitted for it forty years ago.  Because they are insane. Morally, spiritually, psycho-sexually insane.

They want to be a new “elite third gender” which dominates and is universally acknowledged as superior to the other two, definied by its hatred for both authentic masculinity and authentic femininity.  Just as male sodomites believe themselves to be an elite caste, so too do female sodomites.

Stop dancing around the obvious truth.  These witch nuns are dying out because they are a bunch of revolting dykes, and no one wants anything to do with them.  This ain’t rocket surgery, folks.  Just say it.  To their ugly faces.  Sex perverts are by definition “barren” and thus have to resort to vampirism to perpetuate themselves.  In the case of the dyke nuns, they are so revolting that there is nothing they can do to entice even the most perverted and diabolically narcissistic young women.  The Novus Ordo priesthood is dying the same death, but at a slower rate because male sodomites can be enticed to join up by the promise of available sodomy partners and access to young men and lads to prey upon.  Old dykes aren’t nearly as interested in genital acts as the faggots are, hence the filthy witches really have nothing – NOTHING – to offer other than the total desolation of narcissism, self-loathing, and hatred of God.

I’d like to end on a positive note.  The average age of Novus Ordo nuns in the U.S. is now in the LATE SEVENTIES.  Thanks be to God, less than twenty years to go.  Then, all that will be left will be rapidly growing convents, monasteries and abbeys like this…