Guys, we’ve REALLY gotta wise up here.  Donald Wuerl wasn’t just defeated, with his “resignation” being “accepted” by Antipope Bergoglio. Donna Guerl was just given a huge promotion, and is now one of the top five, maybe now as high as top three most powerful chutney ferrets in the Antichurch, and Wuerl is now 100% in control of the Antichurch in the U.S., and his challenger, Cardinal Timothy Dolan of New York is now totally out and shot down.

The whole McCarrick thing began as Cardinal Timothy Dolan making a move to essentially become the sole power in the U.S. Church.  To do this, Dolan needed to take out Wuerl and Wuerl’s coven, which we shall henceforth refer to as “The Wuerlpool”.  Who are the main players in the Wuerlpool?  McCarrick, Mahoney, Cupich, Tobin, Farrell, O’Malley.  Who is out? Dolan and Burke – but Burke has made himself completely irrelevant anyway. Lying down and dying tends to have that effect.

Dolan was super-pissed when Tobin was installed just across the bridge in Newark in ARSH 2017, which was done in retailiation against Dolan for signing the “13 Cardinals” letter during the Synod Against the Family in ARSH 2015, objecting to the clear rigging of the Synod procedures in order to deliver a totally pre-determined outcome.  This episode is what prompted one of Antipope Bergoglio’s most famous raging tantrums inside the Casa Santa Marta – a raging, bellowing screaming fag fit that was so severe that the Swiss Guards CLEARED THE BUILDING in the middle of lunch.  Everyone in the dining hall was forced to essentially evacuate the building, with the sounds of Antipope Bergoglio screaming, “Full power has been given to me! I’m in charge here! If they don’t like it, they can leave! The Church doesn’t need them! I’LL TAKE THEIR HATS!”

So Dolan has been on the outs – the WAY outs – for quite some time,  And, apparently, Dolan, being just as much of an oily, power-hungry mafioso as the rest of them, decided to make a power play and take out the entire Wuerlpool in one fell swoop, which would then leave Dolan alone at the top of the U.S. Church.  How?  Take out McCarrick, and do it concurrent with the release of the Pennsylvania Grand Jury report, which would have the name of Donna Wuerl splattered across every page.

I further strongly suspect that Wuerl and Dolan have been enemies dating back to Dolan’s tenure as the rector of the North American College in Rome. The North American College is the facility where some North American seminarians and young priests live while they are studying in Rome.  It is considered to be a “bishop farm”, and was an absolute BATHHOUSE up until Dolan arrived in ARSH 1994, and it must be admitted that by all accounts Dolan cleaned the place up considerably.  Now Wuerl has been hanging around the NAC cruising for sodomy for his entire career, and has been on the Board of Governors of the NAC since ARSH 1994, and I strongly suspect that Wuerl resented Dolan for clamping down on the sodomy going on in the NAC, not just between students, but especially between students “with ambition” and prelates who cruised for sodomy with young ambitious students and clerics, as Wuerl is notorious for.  There are all kinds of stories out of the NAC about Wuerl’s antics and fetishes.  And so, on the opposite side of the coin, I strongly suspect that Dolan, knowing that Wuerl was and is a notorious, open-secret seminarian-chaser, figured he had ample ammunition to take him and all of his Wuerlpool out.

Dolan’s miscalculation was that he assumed Antipope Bergoglio would throw Wuerl under the bus, because Dolan thought there was no way that Antipope Bergoglio would be so willing to openly embrace sodomy and the sodomitical hunting and predation of young priests and seminarians.  Dolan hasn’t grasped that the paradigm has shifted from one of cover-up to open manifestation and embracing of the faggotry, including the hunting and sexual assault of young men and lads.  Ricca, Barros, Inzoli, Coccopalmerio, Maradiaga, the list goes on and on.  How Dolan failed to grasp this is beyond me. Oh, no. Wait.  I do know why.  It’s because Dolan is an idiot.

So Dolan had the charges against McCarrick come out of the Archdiocese of New York, thinking that he could assume the throne as The Godfather of the U.S. bishops, and as a top-10 power player in Rome.

Now with today’s promotion of Wuerl, Dolan is essentially finished, and the McCarrick-Wuerlpool is stronger than ever.

I guess perhaps people who have never worked in the business world might not get it at first glance, but when Wuerl is told, “I accept your resignation, but you are going to stay on doing exactly the same job, with the same title, just a different sub-title, with a new box of business cards, and you can hand-pick your “successor”, who will then be completely at your disposal to use as a scapegoat or throw under the bus at your convenience, and you will also be able to take a luxury apartment in Rome, being that you are a Cardinal and all, and I will be assigning you special projects and you will be one of my top advisors, and if anyone gives you any lip about any of this, well, here is a GLOWING letter of recommendation,” folks, this is called A PROMOTION.

This isn’t even a Golden Parachute.  Wuerl isn’t being bribed to go away, like Goldman Sachs paying Corzine $600 million to go away.  No, Wuerl has just been made “untouchable” in the FrancisCoven, and will still be running not just Washington D.C., but is now a top-5 player in Rome.

Dolan is up to his greasy eyebrows in sodomite priest scandals in New York (as Voris and Church Militant have been exposing for years), and had a checkered past in Milwaukee and St. Louis, and don’t be surprised if the Wuerlpool and FrancisCoven throw Dolan’s fat butt under the bus “subito”. 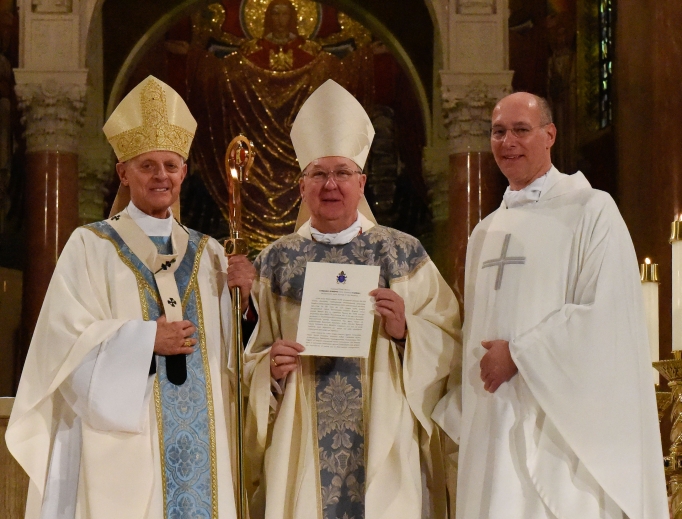