Now, a few one-liners to remember and think about:

-The more decrepit the paradigm, the more immoderate and extreme the truth “seems” within that paradigm.

-“The Catholic Church is an institution I am bound to hold divine — but for unbelievers a proof of its divinity might be found in the fact that no merely human institution conducted with such knavish imbecility would have lasted a fortnight.” -Hilaire Belloc

-“An act of deception, no matter how cleverly conceived or convincingly executed, cannot change the objective reality of a given situation.“ -Louie Verrecchio, quoted HERE

-A foundational principle of law is that when something happens that is against the law, or is invalidated by the law, the situation REVERTS TO THE STATUS QUO – the legal state just BEFORE the crime or invalidity occurred. 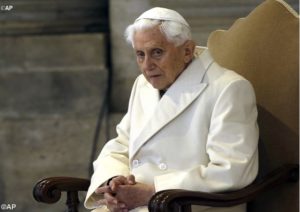 -All valid codices of law are publicly promulgated and published precisely because the plain sense of the words of the law are the last line of defense between the society under said law and the tyrants that would usurp it.

-Criminals aren’t deposed, they are arrested.

-Holding the Catholic Faith, whole and entire, can NEVER, EVER be a schismatic act.

-God is immutable, which means UNCHANGING.
“Glory be to the Father and to the Son and to the Holy Ghost. As it was in the beginning, is now and ever shall be, world without end. Amen.”

-Everything is better with bacon.

-You don’t have NEARLY enough ammunition.

-“You’re my Bread when I’m hungry. You’re my Shelter from troubled winds. You’re my Anchor in life’s ocean, but, most of all, You’re My Best Friend.”

“When I need hope and inspiration, You’re always strong when I’m tired and weak.
I could search this whole world over, You’d still be Everything that I need.”
-Wayland Holyfield, recorded by Don Williams, ARSH 1975 (Eucharistic emphases mine)